Where you can play Augusta National replica holes

Can you really duplicate the magic of Augusta? These golf courses you can play have tried.

Ever wanted to take on "Amen Corner"?

You can. It probably won't be at Augusta National Golf Club, the home of The Masters. But there are plenty of knockoffs out there.

If imitation is indeed the sincerest form of flattery, then it seems that many clubs want to be like Augusta. Its prestige, exclusivity and allure is so strong that its holes have been copied throughout North America. Some appear at replica courses such as Tour 18 Dallas and Tour 18 Houston in Texas and World Tour Golf Links in Myrtle Beach, S.C. Other clubs -- such as the private Golden Ocala Golf & Equestrian Club in Ocala, Fla. -- don't like the term "replica" at all.

"We don't consider ourselves as having replica holes," Golden Ocala General Manager Joe Donnelly wrote in an e-mail. "We have tribute or hole(s) patterned after Augusta holes. As I am sure you know, the actual holes in Augusta are spectacular and impossible to replicate."

Whatever the proper wording may be -- replicas, copies, tributes -- the point is this: Most of us will never get to see Augusta National in person, let alone play it. So the public-access courses that give golfers a taste of Augusta are certainly intriguing. In my mind, if I birdie a hole that looks and plays somewhat like a hole on Amen Corner, I'm bragging to anybody who will listen that I could conquer the real thing, too.

Where you can play Amen Corner

For those in need of a refresher, No. 11 at Augusta -- a 505-yard par 4 called "White Dogwood" -- features a pond near the green. It ranked as the toughest hole on the course in 2014. Larry Mize's improbable chip-in here led to his playoff win over Greg Norman in 1987. Next up is the 155-yard 12th hole -- "Golden Bell." Everybody in the field has trouble picking the right club to hit the narrow green surrounded by three bunkers. Rae's Creek in front seems to derail somebody's green jacket hopes every year.

No hole personifies risk-reward better than Augusta's 510-yard 13th hole -- "Azalea." Lefties such as Phil Mickelson and Bubba Watson have an easier time fading the ball around the corner of the dogleg left than righties do trying to draw it without hitting their tee shots into Rae's Creek up the left side. The second shot, usually off a downhill lie, must clear the creek and hold a tilted green surrounded by four bunkers.

Take each replica hole of Amen Corner for what it's worth. All four clubs have built stone bridges like Augusta. Both Renditions and Tour 18 Houston have Masters-like leaderboards to add more familiarity.

The description of the seventh hole on the Renditions website admits "the surroundings are a little bare -- nothing can touch Augusta's horticultural perfection" about its version of Augusta's 12th hole, but adds: "The hole is accurately represented and does visual justice to the original."

It's interesting to note the modernization of Augusta National isn't reflected in the yardages of the replica par 4 and par 5 holes at all four courses. All the clones of No. 11 and No. 13 at Augusta still play 455 yards and 485 yards, respectively -- distances left behind as Tom Fazio and Augusta have lengthened and "Tiger-proofed" the layout over the years.

The World Tour Golf Links also has a par 3 that mirrors Augusta's 16th hole, the place where Tiger chipped in his improbable "swoosh" shot in 2005.

Florida-based architect Ron Garl designed two-thirds of Amen Corner at the Wooden Sticks Golf Course, near Toronto, and Golden Ocala, the host of the LPGA's Drive On Championship. His eight "tribute" holes at Golden Ocala were some of the nation's original replica holes. Golden Ocala features look-a-likes for No. 12 at Augusta (159-yard 11th hole), No. 13 (473-yard 12th hole) and No. 16 (179-yard sixth hole). The bridges, the creek -- it's all there for members and guests to enjoy.

Wooden Sticks uses the words "inspired by" when describing its 188-yard third hole (Augusta's 12th) and 510-yard fourth hole (Augusta's 13th) on its website. There's a bunker missing behind the green. Our Sr. Managing Editor Brandon Tucker enjoyed his experience at the course in 2009.

The Castle Course at Northern Bay Resort in Arkdale, Wis., near the Wisconsin Dells remains the only replica course in the Midwest. It sports seven replica holes, six in regular rotation on the PGA Tour schedule, including versions of Augusta National's par-3 16th (the 194-yard third hole) and par-5 13th (the 510-yard 11th hole).

The Brickshire Golf Club in Providence Fork, Va., opens its round with a 393-yard par 4 "emulating" the 350-yard third hole at Augusta National, aka "Flowering Peach." This Curtis Strange/Tom Clark course visits holes at Pinehurst, St. Andrews Links and Riviera Country Club, too, with varying degrees of success.

I walked and photographed much of Golf Manitou, a unique replica course in Mont-Tremblant, Quebec, stocked with 14 par 3s and four short par 4s, all mimicking famous holes from around the world. Its par-3 16th hole is supposed to be modeled after Augusta, although I didn't see the resemblance. That's the problem, right? As hard as these courses try, they're never the real thing.

So have you played any of these Augusta National replica holes? And did it give you a taste of the real thing? Join the conversation below. 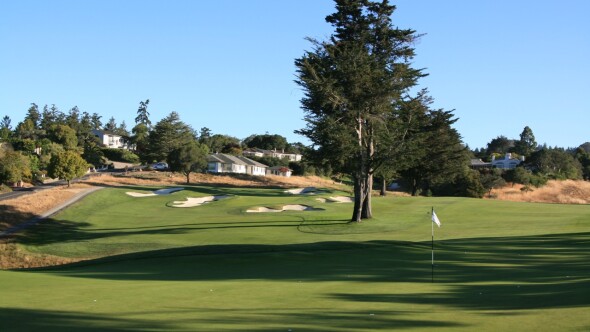 Jason Scott Deegan
Jason Scott Deegan has reviewed and photographed more than 1,000 courses and written about golf destinations in 20 countries for some of the industry's biggest publications. His work has been honored by the Golf Writer's Association of America and the Michigan Press Association. Follow him on Instagram at @jasondeegangolfpass and Twitter at @WorldGolfer.
10 Comments

I have played Golden Ocala over 30 times. I love the replica holes and always thought they were very close to true replicas designed years before golf architects copyright their works and sue anyone who tries to accurately copy their holes.

There is no question that each of the holes always visually looked very accurate to me. However, after playing the real "Postage Stamp" hole at Troon in Scotland, there is no question there were some very important differences. The "coffin" bunker on the left is much wider and easier to hit out of on the replica than the real thing. The real bunker felt like it was maybe 6' wide while the replica is at least twice that. Also, the real green slopes away from the coffin bunker much more steeply than the replica. Thus much harder to keep the ball on the green instead of rolling into the very very deep bunkers on the oposite side of the green from the coffin bunker. The real hole was considerable harder than the replica hole.

Conversely, the replica of the Road Hole from St Andrews was the opposite, much harder than the original. While the holes looked the same from a distance, the top shelf of the real green was probably 4 times larger (thus much easier to get to) than the replica hole. Thus making access to any pin position in the top middle portion of the green much easier at St Andrews versus Golden Ocala. Both approach shots and pitches/chips are extremely hard to keep on the green when the pin is in this area of the replica.

The 2nd hole at Old Town Club was meant to be a tribute hole to the 7th at Augusta. The 9th hole at Cypress Creek Golf Club in Smithfield, VA strongly resembles the 12th at Augusta; angled approach, single bunker short of the green, twin bunkers long, narrower green.

In Bangkok Thailand at Royal Gems Golf City, the back nine is a tropical replica of holes 10 - 18 at Augusta.

I played tour 18 twice in Hubble ,tex. The course is loads of fun. went throgh amen corner -1 . This course is famous holes from all other the world. As a top 20 am in the state of Mo. winning several Greater K.c. championships at the age of 31 ,I didn't fnd it hard but memorable and very fun. Would love to go back. Have played a few of the real holes and were pretty close to the real ones.

Cook's Creek (just south of Columbus Ohio), Hole #10 is a replica of the 13th at Augusta.
http://www.golfohio.com/departments/photo-galleries/cooks-creek-golf-club-ashville-13059.htm#photo-42892

#12 at Augusta is so special because of the swirling wind. #13 that 2nd shot is best played left to right with a right to left lie. And 11 plays downhill with that hill short right that can propel your ball into the drink. It isn't just the yardage and shape that makes these holes but the hills, sloping towards the creek and the winds at the bottom of the golf course

Just as a side note Bobby Jones travelled from Hoylake the day after winning the British Open in 1930 to play Blackwell, Worcestershire, England. Bobby Jones loved the course and it is believed he based the 12th at Augusta on the short 13th at Blackwell.

Renditions outside of Washington DC/Baltimore has a replica of Augusta"s #12https://forelinksters.com/course/renditions_golfs_grand_slam_experience_davidsonville