Shane Lowry: How to play like a Champion Golfer of the Year

The affable Irishman, who is launching an instructional series, Lessons with a Champion Golfer on GolfPass, must wait to defend the claret jug until next summer.

Lowry 'forever grateful' to have name on claret jug

It hasn't been the year Shane Lowry hoped for as Open Champion.

Since Lowry's memorable 2019 Open win at Royal Portrush in Northern Ireland, the world has flipped upside down because of the coronavirus pandemic. Lowry told Morning Drive's Gary Williams that he's disappointed he didn't get to defend his title at the 2020 Open Championship at Royal St. George's. Golf's oldest major has been postponed until 2021.

"Selfishly speaking, I was very disappointed," he said of the postponement. "I was looking forward to having all my firsts as the Open champion – getting to go to Augusta (for The Masters), getting to go to the Irish Open as the Open champion and getting to defend my title, which would have been coming up soon. Getting to do that, I was looking forward to it. I’m going to get to do that in the next few months or the next year or so. It is just strange times. The R&A made the decision. They had to do it for their own reasons." 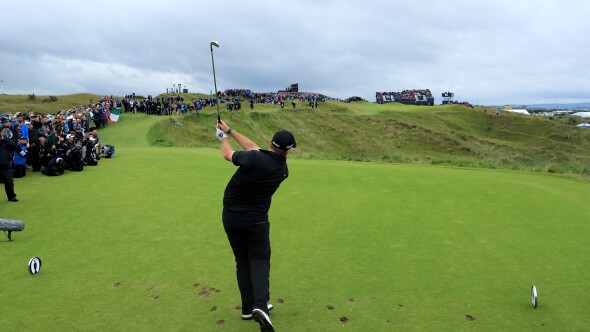 Articles
3 Min Read
Open, closed: 4 takeaways from the decade's final major
A great venue and a pair of etiquette controversies will have fans talking.

Lowry hopes his game is rounding into form for a strong push the second half of the season. He had a pair of top-30 finishes on the PGA Tour early in 2020 before the three-month shutdown. He hasn't play as well since coming back, missing cuts at the Charles Schwab Challenge and the RBC Heritage before finishing tied for 60th at the Traveler's Championship. He told Williams he's been struggling on the greens. He ranks 206th in overall putting on the PGA Tour.

“I’m just trying to become a consistently better golfer than I have been," he said. "I’ve won some big tournaments over the years (2019 Open, 2015 Bridgestone Invitational), but I’ve not been as consistent as I would like. I really feel like my couple of weaknesses, I need to sharpen them up. I have struggled on the greens. Tee to green, I’ve been fine. Tee to green, I’ve been good enough to be up there (on the leaderboard)."

Lowry is a proud member of the European Tour and looks forward to the day when he can tee it up overseas again. Lowry is pushing to have the Irish Open - which he won as an amateur in 2009 - rescheduled for September the week of the postponed Ryder Cup.

In the meantime, he's excited about the new instructional series, Lessons with a Champion Golfer, he recently filmed for GolfPass. He said he really enjoyed filming it with Martin Hall. Visit the instruction series webpage for his tips and secrets.

"It is a very difficult game we play," said Lowry. "I just try to make it (playing golf) as simple as I can. ... I think people will be interested in the way I go about my short game."

Tim Gavrich
Senior Writer
Now Reading
Shane Lowry: How to play like a Champion Golfer of the Year
Search Near Me