It also reminded us of two things:

1. Trying to hit the center line to win the prize for the "straightest drive" in all those outings we've played in over the years.

2. Hoping to thread the needle between rough, trees, bunkers, dunes, lakes and all sorts of hazards to land on the narrowest fairways we've come across in our travels.

Attempting to hit a fairway 20 yards wide is daunting enough. Just ask anyone playing in a U.S. Open. Holding a strip of grass 1 yard wide with driver in hand? Impossible for most of us. Here are 10 other courses featuring narrow fairways that had us quivering with fear on the tee. They weren't 1 yard wide but sure felt like it at times.

Harbour Town at Sea Pines Resort is so narrow that Tiger Woods teed it up once and never returned. Despite a respectable showing - a tie for 18th in 1999 - Woods didn't think the tight Pete Dye/Jack Nicklaus design fit his game. I quite enjoyed my round years ago plotting my way through the trees and doglegs until I got to the 18th. That hole is so intimidating with the Calibogue Sound up the entire left side. Don't let the pros fool you into thinking it's easy. - JSD

Orange Tree Golf Club - Orlando, Fla.
There's a place in the game for tree-lined tests of golf, but this course not far from the Bay Hill Club & Lodge stretches the boundaries of what's acceptable. Multiple slender fairways with white OB stakes less than 10 yards off both edges makes Orange Tree very little fun off the tee. There's not much strategy - just hold on for dear life and hope you brought enough golf balls. - TG

Sahalee Country Club - Redmond, Wash.
While I don’t remember what I shot at the host of the 1998 PGA Championship, I know it wasn't pretty. However, I do remember hitting one of those legendary evergreens and losing the ball. It’s definitely not a course I would join as a member. I pride myself in being a straight-ball hitter, but these fairways at Sahalee are constricted to the extreme. It’s hard to swing with confidence with a tunnel of trees staring you down. - JSD

Just north of Stuart, Palm Cove, a Chi Chi Rodriguez/Rick Robbins design, tops out at less than 6,400 yards but is as strenuous a test off the tee as you'll find, with not just trees but water lining the sides of most fairways. Even if you are finding fairways, you're not always out of danger, as several forced carries into greens make approach shots nerve-wracking as well. As a recent reviewer wrote, "Bring balls and have fun!" - TG

Arrowtown Golf Club - Arrowtown, New Zealand
Full disclosure, I didn’t get to play the course nicknamed “Narrowtown” during my only trip to Queenstown back in 2013, but I drove by and got a glance at of the ribbon-esque fairways at Arrowtown. If you look at the scorecard, which shows only 5,400 meters (roughly 5,900 yards), you might be fooled into thinking you can go low on the par 70. The fairways squeezed by rough, trees and schist rock formations say otherwise. The front (River) nine is pinched tight by the Arrow River and Centennial Avenue. - JSD

Arrowhead Country Club - Myrtle Beach, S.C.
"Narrowhead" would also be an appropriate nickname for Arrowhead, a 27-hole Raymond Floyd design that meanders through tight confines. The shaping of the course - moguls lining fairways and large, broad bunkers - makes tee shots look even more cramped than they already are. - TG

Le Golf National, the 2018 Ryder Cup host and annual venue for the French Open, proved to be a torture chamber for the Americans, me included. I played the course two years before the actual event and was pummeled into submission (just like Phil and friends) in a flurry of tee balls that found heavy rough, mounding and the water. No wonder it's called the "Bethpage Black" of Europe. - JSD

Quarry Ridge Golf Course - Portland, Conn.
One of the more scenic courses in my home state, Quarry Ridge, a shortish par 72, sits on a site true to its name: a sloping tract with rock outcroppings that will send your ball careening into oblivion if you're not careful. "Definitely a target golf course," wrote one reviewer last spring. "Not a lot of room for small mistakes." - TG

All links overseas can feel narrow when a crosswind is blowing balls into the dunes. But even in the nicest weather, Murcar can feel like it's squeezing the life out of your scorecard. It's only 6,516 yards, but still daunting enough to host a European Tour event, the Saltire Energy Paul Lawrie Match Play, from 2015-17. - JSD

Having never played legendary redwood-lined courses like Sahalee in Washington or Northwood in California, Salem Golf Club, a 1920s local haunt, is the closest I've come to that grassy-hallway feeling. The course is appropriately short, with the height of the pines lining the fairways making already cozy confines feel even more imposing. - TG

What's the narrowest golf course you've ever played? Let us know in the comments below. 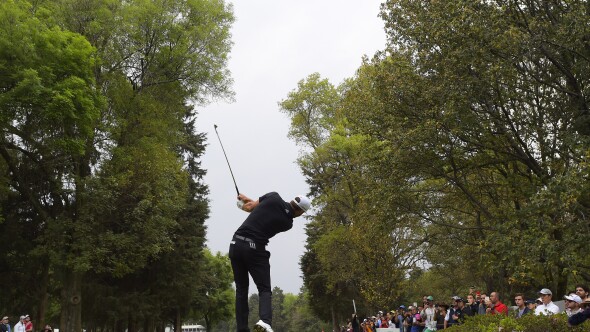 Articles
5 Min Read
Friendly confines: Is there a place for tree-lined golf?
Big, wide golf courses are all the rage these days, and for good reason. But here are some tight-corridor courses at the other end of the spectrum.

When I read the title of this article my first thought was Palm city. Glad to see it on the list. Well done!