What your ball marker reveals about your golf personality

Ball markers are a small, but critical element, of your golf gear.

Something as small as a coin almost cost Jon Rahm some serious coin at the 2020 BMW Championship outside Chicago.

When Rahm accidentally picked up his ball without marking it during the third round, the subsequent one-shot penalty ultimately put him in a playoff with Dustin Johnson the following day. If not for a heroic 66-foot putt on the final hole to cash in the $1.7-million first prize, Rahm might have never forgiven himself for such a blown opportunity, costing him $684,000 and critical FedExCup points heading into the Tour Championship. Let that be a reminder of the importance of something so simple and small as the ball marker.

I like to think of the ball marker as an extension of a golfer's personality. The more colorful or unique, the better. The bigger, well, that's up for debate.

A recent birthday present has recently caused me to completely rethink my ball marker strategy. My father, the guy who loves to cruise garage and estate sales looking for treasures, sent me a box of vintage ball markers he found. They're some of the coolest trinkets he has unearthed: ball makers from Pasatiempo and Pebble Beach and the other famous courses of California and beyond. They're smaller and lighter than a penny with a larger-than-expected single spike on the back to stick into the green.

My dad’s scavenger hunting skills at garage and estate sales pay off on my birthday. He sent me a set of cool vintage ball markers: #PoppyHills #DelMonte #SpanishBay #SpyglassHill #PebbleBeach #Pasatiempo #CypressPoint #StAndrews and a dozen cards that included 1990s Jordans and 2 #Kobe rookie cards.

The crown jewels are one from the Cypress Point Club and the Old Course at St. Andrews in Scotland. A quick online search shows similar markers selling for upwards of $50. For that reason, plus the fact that I've never played either course, I'm not going to put them in my bag. Within the past 18 months, I lost my favorite ball maker, an elaborate two-in-one ball marker from the Links at Fancourt, a memento of a fabulous trip to South Africa in 2016. I'm not convinced it wasn't swiped from my bag by airline/security personnel during a golf trip, so I don't want that to happen again. A couple of the other vintage markers, though, will immediately find their way into my bag and playing rotation very soon.

What golf ball markers to use

Choosing what ball marker to use should be just as important a decision as what clubs you buy or balls you play. It's about personal preference.

Every ball marker I use, I want it to make a statement, to tell a story, to mean something. As you can see from the photo below, I've got lots of choices. Funny thing is, ball markers are not my golf collectible of choice, but they could be.

You could use the ball marker attached to your glove, but where's the fun in that? It's so convenient and practical, but man, it's so blase. I'm not about neon golf shirts and Loudmouth trousers, but I do believe in showing some personality on the course. Use the ball marker to express yourself: Where have you played? What's your home club? What's your alma mater? How about a favorite color or logo? These all can be expressed subtly, yet proudly, on your ball marker.

I sometimes go big and gaudy. The gold-plated Wynn Golf Club marker I got at the course's 2019 grand re-opening and silver Golf Advisor piece are the biggest I own. Both are more than an 1 1/2 inches in diameter. I'm okay with large-and-in-charge as long as you're overly conscious about where you mark it in relation to your playing partners. Golf Advisor's Tim Gavrich tells a funny story about the grief he got about a large ball marker he used in high school. The next round out with his critics, he marked his ball with a blank CD instead.

I was a fan of the ball marker clip that attaches to the brim of your cap when they first came out. Since I'm always digging in my pocket trying to find a marker, I appreciated having it readily available, although I don't wear them anymore. Magnetic ball markers attached to divot tools are equally convenient to use.

What's interesting is my favorite ball markers aren't even related to golf at all. In 2015, I traveled to Ireland with a group of disabled American veterans, dubbed "Heroes to Ireland". As a token of newfound friendships, I was given a pair of military coins from two participants. They're the same size, thickness and shape as high-end ball-markers albiet much more elaborate and ornate. I'd never seen anything like them. I treat them like priceless, one-of-a-kind souvenirs that aren't for sale at any pro shop.

My least favorite style is the poker chip. I'm not a gambler, so maybe that's part of it. To me, they're just gimmicky and cheap. I'd rather use the plastic freebies given out by many bucket-list courses. There's no shame in grabbing more than one if you're at a famous course where you need extras for your bag or a few friends.

There are dozens of companies trying to leave their mark in this niche, competitive space. Searching social media sites such as Instagram, Etsy or Pinterest reveals all sorts of shapes, sizes and styles. Check out the Instagram accounts of @krakengolf, @northernballmarkers and @libertyballmarkers for inspiration. The company, BallSpot, repurposes bottle caps into ball markers.

Blingo ball markers, made with Swarovski crystals, started out as a hobby for Charlotte Daughan, a Golf Channel team member of mine who was a four-time NCAA Division II Player of the Year at Rollins College in Florida. Her markers went mainstream when U.S. Captain Beth Daniel bought them as a gift for her 2009 Solheim Cup team. Numerous LPGA Tour players still use them.

Seamus has risen above the crowd with its hand-forged ball markers made by a second-generation blacksmith. The shapes go beyond circles and squares, expanding into horseshoes, shamrocks and even an orca. All sorts of sports logos, animals (including college mascots), themes and phrases can be carved into the bronze, stainless steel, copper and nickel materials. They make great gifts if you know what interests your favorite golfer.

These types of custom-made ball markers might cost a little more. It's money spent that your playing partners will notice. If your putting skills don't stand out on the greens, at least your ball marker will.

What special ball marker do you use? Let us know in the comments below. 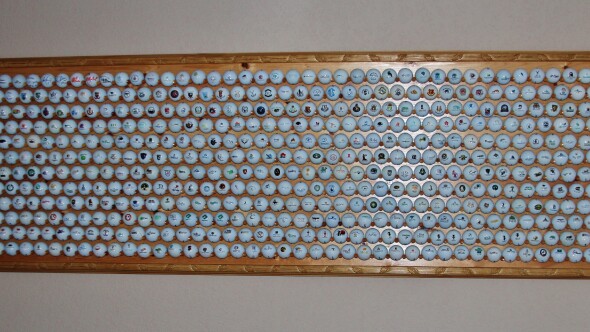 Articles
5 Min Read
A look at the ups and downs of golf's 10 best collectibles
There are pros and cons to everything golfers collect. Here's a handy guide to 10 of the most popular items.

Jason Scott Deegan
Jason Scott Deegan has reviewed and photographed more than 1,000 courses and written about golf destinations in 20 countries for some of the industry's biggest publications. His work has been honored by the Golf Writer's Association of America and the Michigan Press Association. Follow him on Instagram at @jasondeegangolfpass and Twitter at @WorldGolfer.
10 Comments

I have a ball marker from the U.S. House of Representatives that was once owned by Tip O’Neill.

I like to use coins left over from trips to other countries (before the CoVID-19 pandemic!). Off the top of my head, I have ones from Cayman Islands, Jamaica, South Korea, Japan, Costa Rica, Canada and Mexico.

Enjoyed your article and agree that ball markers give a golfer the chance to show a little style while not overdoing it. I usually use a magnetic Clemson University ball marker accessible from a hat clip. Clemson is my alma mater. As a retired Air Force officer, I occasionally use one of my military coins or a patriotic-themed marker. I have a small collection of markers from courses I’ve played — mostly in the Spokane area.

I use a 5 pence silver coin that I picked up in Scotland in 1990s - it is the size of a US or Canadian dime, and although British coins are for the entire UK, it has a thistle on it, which, of course, is a symbol of Scotland.

It is low profile, but it means something to me.

I have several favorites:
A “B/U“ in green and gold for my Alma Mater Baylor ;
A two-toned Euro coin;
A golf ball looking marker with my name on it;
and a very flat plastic one for use when the possibility exists of my marker being hit by a playing partner’s shot

My favorite marker is an outsized double-sided one with a smaller marker inside the magnetized side from Merion Golf Club.It was given to me by my friend who was a long time member at this venerable club.

I use a poker chip style ball marker that is essentially also a business card for my travel agency. I give them away to new playing partners, and at charity tournaments that I sponsor. I'd be happy to send you one if you send me an address.

I’ve taken to try and finish the golf digest top 100 and collect a ball marker from each course plus those courses i just like. Have them in a picture frame with a magnetic back.

Looking at each one I can recall different highlights from the round.

This is a really cool idea, John. Send a picture! Love to see it.