Golf's version of chasing the "Big Five" in South Africa 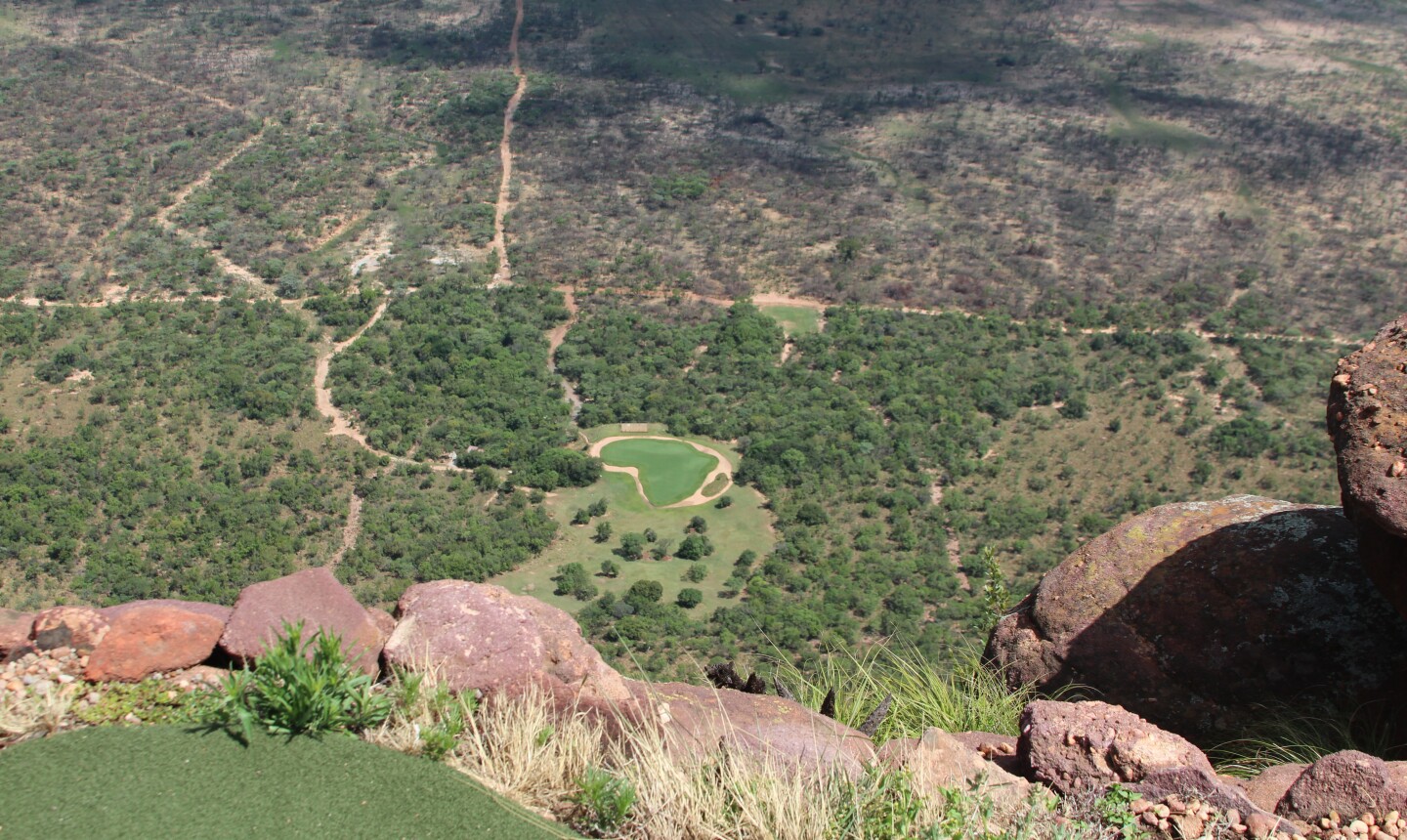 Playing the Extreme 19th hole at Legend Golf & Safari Resort is one of golf's most thrilling experiences. Jason Scott Deegan/GolfPass 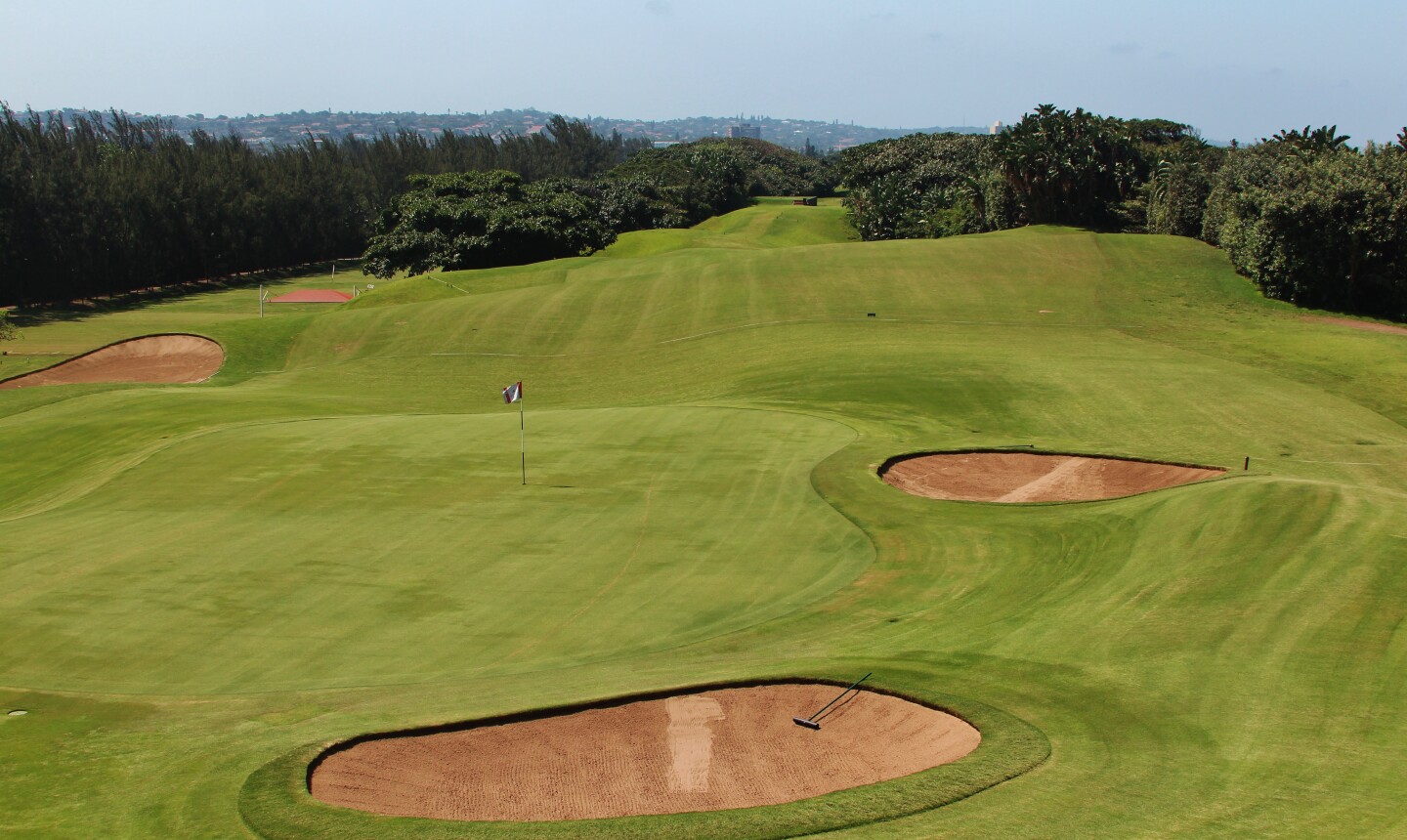 No. 18 at the Durban Country Club is one of the most unique finishing holes in tournament golf. Jason Scott Deegan/Golf Advisor Scenery rules at the Arabella Golf Club, one of the great courses near Cape Town. Jason Scott Deegan/Golf Advisor 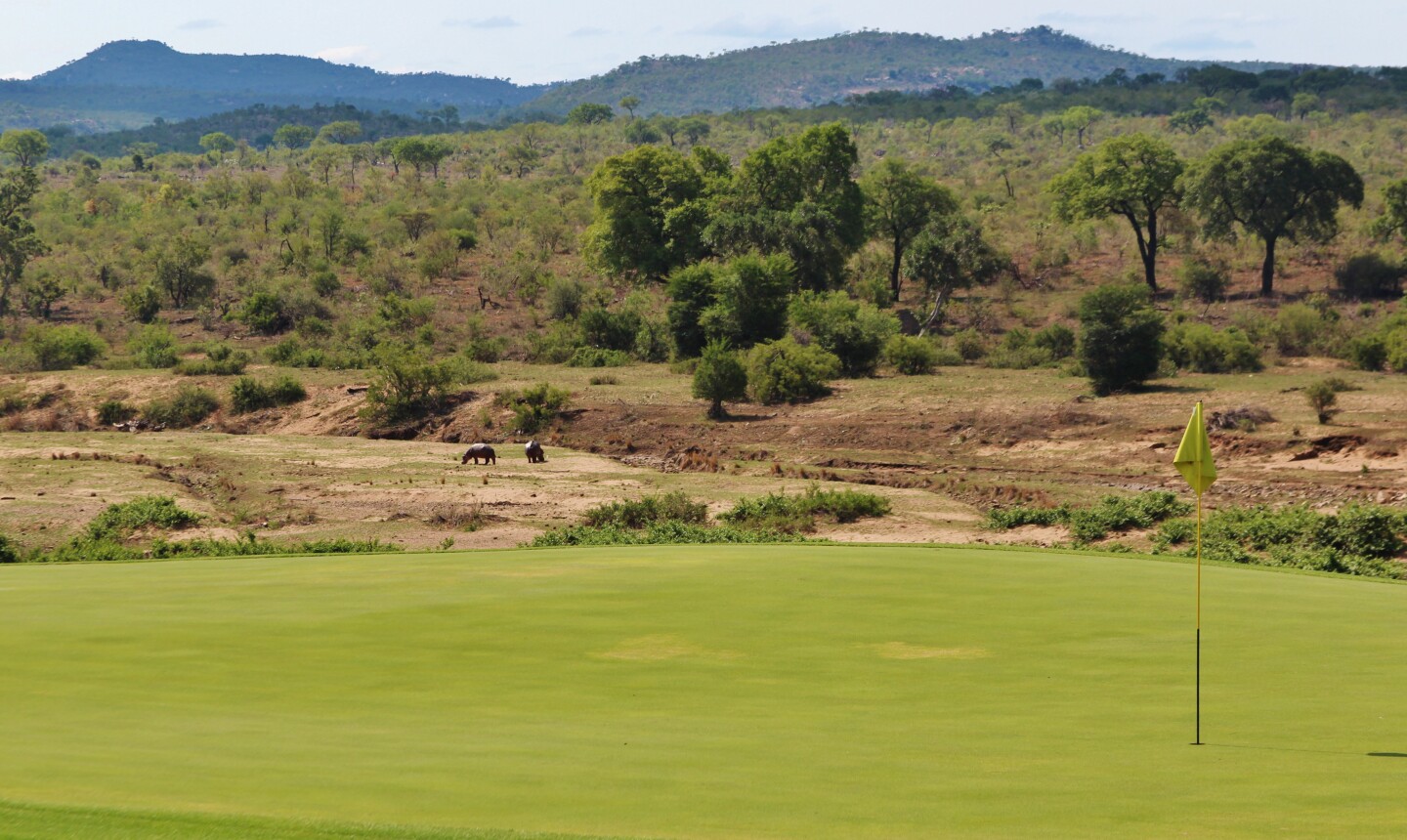 I was no different. I was more looking forward to the safaris than the golf during a 13-day, 10-course golf adventure in December.

I came home blown away by both.

I found my own "Big Five" -- the most memorable places I would recommend to any golfer.

The long journey to South Africa has never been more affordable. The South African Rand is struggling against the U.S. dollar. Golfers can play world top 100-caliber courses and dine like royalty with big savings. To play the exclusive Leopard Creek Country Club -- ranked by some as the best course in the country -- a visitor must stay at one of the 15 affiliated safari lodges and pay 2,750 Rand for a tee time. With the current exchange rate (roughly 15 to 1, instead of the traditional 11 to 1), a round at Leopard Creek would cost $183.

The Links at Fancourt, host of the 2003 Presidents Cup, charges between 1,900-2,000 Rand for resort guests, the equivalent of roughly $125-$135. Not cheap but certainly more affordable than almost any other top-100 experience.

Every North American dreads the 14-hour flight from New York to Johannesburg, but don't let it deter you. I flew business class with South African Airways each way. Good food and wine, along with the reclining bed, keep things comfortable. I also flew a number of SAA domestic flights. Meals (or a meal-like snack) were always served. It seems this African airline is more civilized than most.

Now let's go hunting for that "Big Five" for golfers:

Ever wanted to play those imaginary golf holes you see on "extreme golf" calendars? The Legend Golf & Safari Resort, located less than a three-hour drive from Johannesburg, has its own amazing version.
A helicopter flies foursomes up and down Hanglip Mountain to play the "Extreme 19th", a 400-yard par 3 off of a mountain ledge to a green shaped like Africa. It's quite the thrill. This experience alone is worth the plane ride from America.

Each member of a foursome gets six shots to put a ball in play. We were told it takes a poke of at least 230 yards to carry the jungle in front of the green and 260-plus yards to reach the green. Each ball takes more than 30 seconds to drop to earth. A spotter reports by walkie-talkie where the balls lands -- in play or out.

I'm terrified of heights and couldn't get myself to put a proper swing on the ball. I lost all six of my shots, and ended up making a 15 after a drop near the green. The resort has promised $1 million to the first golfer who makes a hole in one.

The Legend has all the comforts of a high-class golf resort -- individual lodges for sleeping, good food in the new clubhouse, a solid Signature Course and an even stronger 10-hole, par-3 course called The Tribute. Legend is the only golf resort in the world with its own "Big Five" safari park.

Imagine chasing lions and leopards at daybreak on a game drive, then encountering zebras later that day on the Signature course, a unique collaborative effort where 18 different famous pro golfers each designed a hole. That's an epic day of golf and safari right there.


My favorite surprise of the trip was the Oyster Box, a marvelous colonial-themed hotel overlooking the Indian Ocean north of Durban. The lighthouse on the beach has come to symbolize the boutique hotel. The presentations of its most popular meals -- the curry smorgasbord at dinner, afternoon tea and the complimentary breakfast buffet -- look more like an art than food.

The nearby Durban Country Club -- ranked 97th on Golf Magazine's list of the world's top 100 courses -- and Zimbali Country Club provide the perfect 1-2 punch for golf.

Durban Country Club, host of 17 South African Opens, has at least eight world-class holes thanks to some of golf's most naturally undulating fairways. Its opening five holes along sand dunes near the Indian Ocean and closing stretch are simply awesome. The 250-meter 18th hole (at roughly 325 yards) is a drivable par 4 set in the shadow of a 70,000-seat soccer stadium that hosted the 2010 World Cup.

Fancourt became an international draw when Tiger Woods and Ernie Els dueled to their legendary draw at the 2003 Presidents Cup on the Links at Fancourt.

The famous golf resort in George -- a five-hour drive (or short flight) from Cape Town along South Africa's famous "Garden Route" -- continues to modernize and diversify, adding more family programming and luxurious touches. It has remodeled its original Manor House into a bastion of six-star luxury and privacy. Everything else, the spa, food and accommodations, is still first class.

What hasn't changed is the famous Links at Fancourt, a walking-only paradise that's as unique as any course on the planet. Gary Player simulated an inland links by moving mountains of dirt to form mounds and pot bunkers. Where he got creative was his use of water features that aren't normally found on links: Ponds and wetlands lined with elaborate stone bulkheads and decorated with flowering water lilies and walking bridges. A clash of styles? Hardly. It all works in harmony. The Links of Fancourt is the only course I've ever rated five stars in all six rating categories on Golf Advisor (click here).

Fancourt's Montagu Course, a pretty parkland motif of flowers and water, got a major upgrade during a David McLay Kidd redesign in 2005. The new first and ninth holes by Kidd melded everything together. It's equally compelling in its own way. Even the beginner-friendly Outeniqua Course rates among the country's top 20 courses by South Africa Golf Digest.

Golf Advisor's Mike Bailey gave the nearby Pinnacle Point Golf Club five stars for its ocean views, so there are plenty of reasons to stay awhile at Fancourt.

It was easy to be mesmerized by Cape Town after staying at the Taj Cape Town. There's so much to see and do that I would have loved more time than just three days.

Getting to the top of Table Mountain is a must. The views have to be seen to be believed.

Our ferry ride to Robben Island felt like a nature tour. Whales and dolphins frolicked in Table Bay. Obviously, the ride wasn't so pleasant for Nelson Mandela and other prisoners who suffered in captivity on the island during apartheid from 1948-1994. The visit was both humbling and educational.

Back at the water front, be sure to shop for all your souvenirs. The Greenmarket Square, an outdoor bazaar, is closer to the hotel.

Quality golf rings the city. Steenberg Golf Club in the Constantia Winelands is the closest choice, home to a solid course surrounded by the Silvermine mountain range and an awesome bistro for wine tasting and dining in its vineyards.

Arabella Golf Club gets my vote as the best course, although it's a one-and-a-half-hour drive away in the Kogelberg Mountains. The best holes overlook the scenic Bot River Lagoon. The toughest of the bunch might be Pearl Valley Golf & Country Estate, a waterlogged Jack Nicklaus course in the Cape winelands that hosted three South Africa Opens from 2007-09.

Leopard Creek Country Club itself -- host of the European Tour's Alfred Dunhill Championship since 2011 -- looks like any exclusive country club in America. The differentiator is its location adjacent to Kruger National Park.

During my round, I saw monkeys, a splitting cobra crossing a fairway and two hippos grazing along the Crocodile River, which is only visible from the 13th green. My flop shot on the seventh hole inadvertently hit a three-foot lizard sitting on the green.

Leopard Creek was just a short ride from the 12-room Jock Safari Lodge, the safari lodge inside Kruger that allowed us access to the private course. The mosquito net hanging over the bed and the outdoor shower make you feel like you're truly living in the bush. However, the five-star dinners under the stars and the attention from the staff mimic that of a high-end hotel.

The game drives at dawn and dusk were pure magic -- lions fighting hyenas for a kill, lion cubs coming within three feet of our vehicle and a sighting of the elusive honey badger. I'll never get excited seeing a deer on a course again.

A South Africa golf trip changes your perspective on the world forever.