It's the English major in me, but I've always been fascinated by names of golf courses, almost as much as the courses themselves. In the overwhelming majority of cases, I've found that the most direct approach is best.

"Augusta National Golf Club" communicates an impressive amount of information in just four words and, most importantly, it communicates it accurately. Analyzing the name backwards...

1. "Club" implies there are members. Indeed, it is a very elite private club.
2. "Golf" is self-explanatory; the club is devoted to golf.
3. "National" means its players hail from across the nation.
4. "Augusta" is also self-explanatory. This national golf club is located in Augusta (Georgia).

Breaking it down like this seems obvious, but relatively few golf facilities follow this formula. It's amusing how often golf facility names are, despite good intentions of their overseers, misleading.

In the Connecticut town where I grew up, the private golf facility is the Golf Club of Avon. But it's not precisely a golf club, because in addition to its 27 holes, it has a pool, several tennis courts and even a couple paddle tennis courts. Those extra recreational activities make it, by definition, a country club.

The Golf Club of Avon's street address is even 160 Country Club Road.

The club actually did start out as a golf-only concern in the 1920s, and was eventually called "Avon Country Club" until the City Club of Hartford bought the facility in 1945 and gave it its current name. Though it eventually became independent of the now-closed City Club, it's understandable that the club may feel the decades of brand equity stored in "Golf Club of Avon" is such that reverting to "Avon Country Club" would not be worth the potential confusion, logo rebranding, etc. Nevertheless, it's an example of the name of a club not quite matching its true nature.

There are examples on the other side of the coin, too. Also in Connecticut, the public Tallwood Country Club has neither any recreation facilities other than its golf course, nor a traditional, dedicated club membership (it does have men's and women's leagues, though). "Tallwood Golf Club" would be a more precise name.

Another interesting case is that of Beverly Country Club in Chicago, which hosted the 2014 Western Amateur and whose design history includes Tom Bendelow and Donald Ross. The club recently removed its pool, the only non-golf recreation amenity. That makes it a "Country Club" that is now more accurately a golf club.

Even more fraught than potential "Golf Club"/"Country Club" confusion is the distinction between a "Golf Club" and a "Golf Course."

Technically speaking, a golf club does not require a course. Just look to Scotland, where the game was founded. The Old Course and the other St. Andrews Links layouts serve as merely the fields on which various golf clubs - groups of like-minded people who enjoy golf - play their golf. "Golf Club" refers specifically to the people who comprise a membership, not the course(s) where that membership conducts its matches and social rounds. 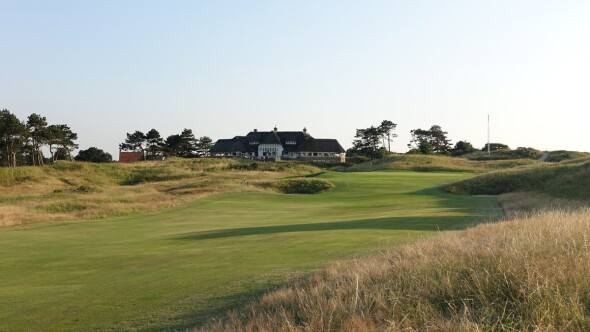 Articles
6 Min Read
Debunking The Links Golf Myth
Certain links golf courses are some of the best in the world. But the term has tended to be overused, and it's not doing golfers any favors. Here's why.

Here in the United States, there does not seem to be much rhyme or reason in the use of "Golf Course" or "Golf Club" in the name of a facility. My home facility here in Vero Beach, Fla., is Sandridge Golf Club, a municipal outpost with 36 holes. But across the country, over in San Diego, you're probably familiar with another 36-hole muni: Torrey Pines Golf Course.

It's a difference without distinction. Neither facility sells memberships per se, though locals do have ways of securing discounted green fees. So, which one is correctly named?

To reiterate, the word "club" has a specific connotation: that of an organized society, membership in which requires some sort of up-front payment and/or application process. All golfers are welcome to play at Sandridge, just as they are at Torrey Pines. Because membership is not required to gain access, I would favor renaming the former "Sandridge Golf Course" for the sake of ultimate clarity.

Why does this matter? you're probably asking.

In the end, a golf facility's name is an important signifier to non-golfers and, more importantly, new golfers. Instinctively, a person who is taking up the game - and who is therefore unfamiliar with all of golf's nuanced customs and conventions - would find a "Golf Course" more friendly and welcoming than a "Golf Club" because of the strings attached to the word "Club."

Exclusivity and snootiness are two perceived facets of the game that hinder its wider cultural acceptance and stunt its growth. It may seem like a trivial distinction, but the way golf facilities style themselves makes a difference in how open their doors seem to new customers.

And don't even get me started about restaurant names!

Interesting article with subtle and not so subtle differences in definitions. I personally don’t have much time for the ‘country club’ title or definition, -reeks of snobbery and the one thing the Scots wanted was for golf to be egalitarian where the successful business man., church minister, judge played with plumbers, carpenters and even the unemployed. We are all equal on the course and it’s the game, not your status that matters.Its ironic that America, that most democratic of countries should develop the idea of exclusive and expensive country clubs.