In a state blessed with no shortage of beaches, the ones on Sanibel Island are some of Florida's very best. Everything tranquil that thoughts of the Sunshine State can conjure come together there: swaying palm trees, sugary sand, mesmerizingly blue water, proximity to drinks served out of coconuts. Four years ago, I interrupted a walk on one of them in order to propose to my wife.

We live clear across the state and were spared any of Hurricane Ian's worst conditions in late-September, but Sanibel wasn't so lucky. Ian severed the Sanibel Causeway, the island's sole connection to mainland Florida, in five different places. It flooded the homes it didn't totally obliterate with wind, water and blowing debris.

Unsurprisingly, the island's four golf courses - The Dunes Golf & Tennis Club, Sanibel Island Golf Club, The Sanctuary Golf Club and the nine-hole South Seas Golf Course - will be closed for a while as the island puts itself back together after facing winds as high as 150 miles per hour.

One local news story in the days following the hurricane points to people's resiliency and desire to reclaim normalcy, even in the wake of such an ordeal as a Category 4 hurricane. Mike Dopslaff, the head pro at The Dunes, where the storm deposited a hot tub on the 18th green, took an almost defiant position in the article, saying, "The inspiration I will get from bringing [the golf course] back and overcoming the challenges...it will feel good again when we open the doors and have someone teeing off that first tee again."

Reclaiming a golf course amid the general devastation of a hurricane seems unimportant, but in a place like Sanibel that is so centered on the idea of leisure and relaxation, and so good at providing it, it is a small though important piece of the overall recovery effort. It is too early to know what will be required to get things fully up and running again, but judging by Dopslaff's resolve, it will be a happy occasion.

On nearby Fort Myers Beach, Matt Oakley, who is the head golf professional at Worthington Country Club in Bonita Springs, helped save the lives of two of his neighbors. His is one of many stories of heroism and resilience from the storm.

Ian's path across the state brought it northeast from Sanibel, inundating Central Florida with more than a foot of rain that caused considerable upheaval at many area courses. As of October 10, four golf courses at The Villages - Florida's retirement mega-complex with more than 30 golf courses - remained closed due not just to slow-receding floodwaters but sinkholes that had opened up near fairways and greens. Two such craters opened up at the community's El Diablo executive course. At the Ritz-Carlton Golf Club, Grande Lakes in Orlando, flooding carried dead fish into some of the course's bunkers. Streamsong Resort's golf courses, situated as they are atop hundreds of feet of pure sand, withstood the weather well and reopened about a week after the storm despite taking on more than 14 inches of rain.

The storm turned an already stressful job into an around-the-clock fire-drill for dozens of dedicated Florida golf course superintendents. A recap by TurfNet's John Reitman reminded readers that Hurricane Irma sent similar misery through the state, robbing many courses of the valuable equipment theyn rely on to maintain their courses. Ian did the same.

In all, more than 180 Florida golf courses faced hurricane-force winds from Hurricane Ian.

If you have a fall or winter golf vacation scheduled to southwest Florida - Fort Myers, Naples, Bradenton, Sarasota - be sure to reach out to the courses or resorts you're planning to visit to get the latest status on their recovery. In many cases, outside the most directly-hit areas, courses have reopened and are welcoming golfers. They will be grateful for both your patronage and your patience as they rebuild.

Although Florida took the majority of the beating from the storm, once it crossed the state and re-emerged in the Atlantic Ocean, it regained hurricane strength before plowing through the northern part of South Carolina's coastline, making landfall around Georgetown, just south of the Myrtle Beach area.

The Grand Strand's golf courses fared well for the most part, with some along the south end needing a couple of days to get back up and running. All of the area's 90 golf courses were open by October 5.

Did your home golf course feel the effects of Hurricane Ian? If you have any updates to share, please post them in the comments below. 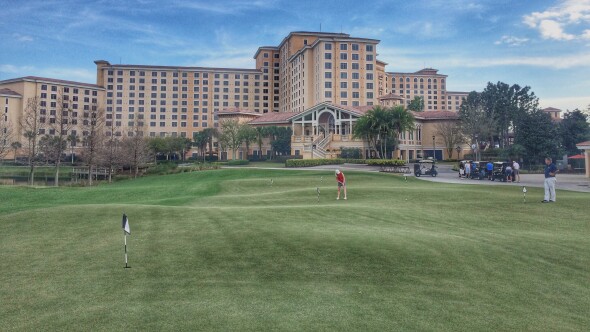