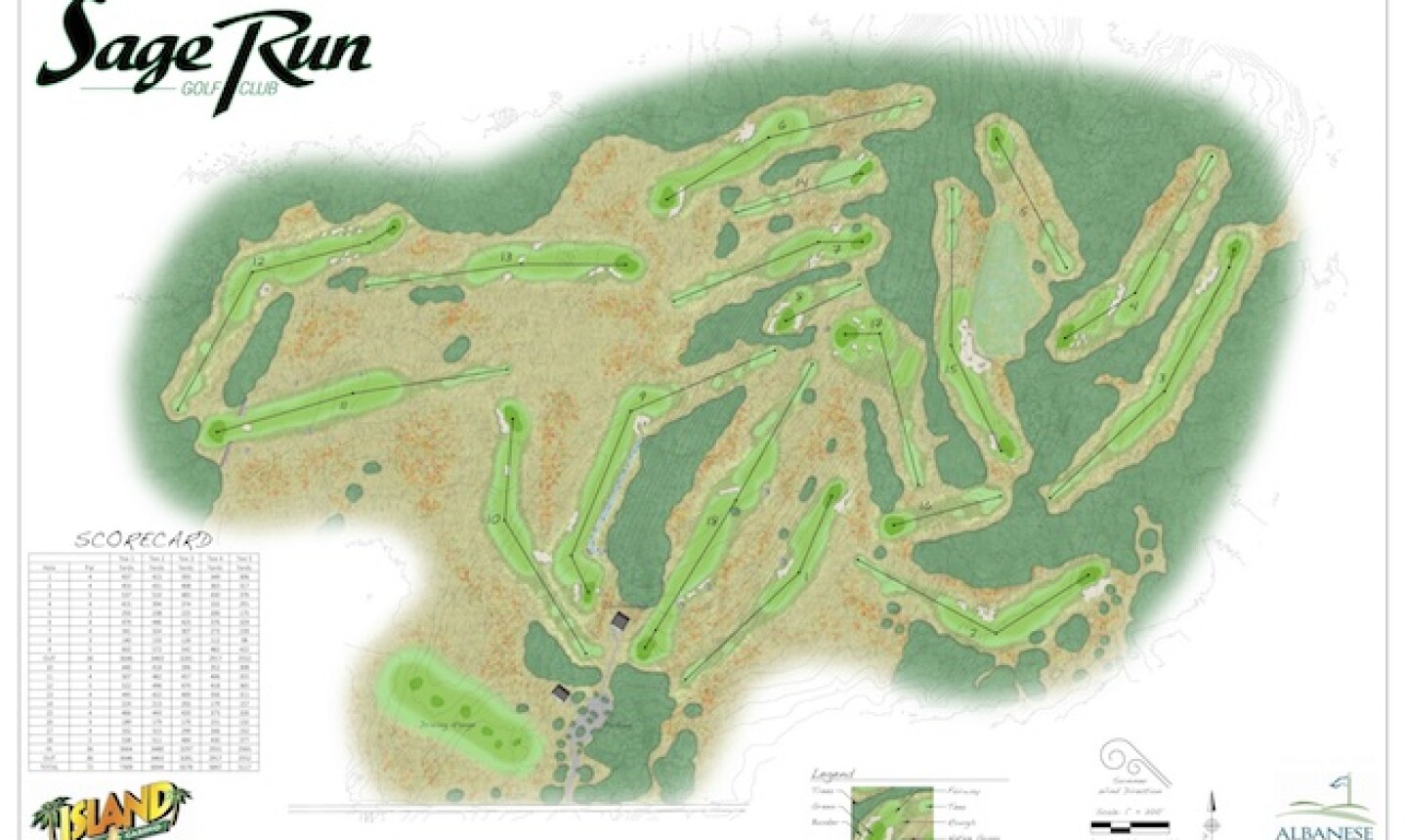 The soon-to-be-famous drumlin at Sage Run dominates the middle of the property, from the clubhouse heading northeast toward the fifth green.

Here's a ten-dollar golf vocabulary word for you: "drumlin."

Not sure what a drumlin is? Neither were we until recently. But traveling golfers are about to get up close and personal with one very soon.

It turns out a drumlin is an oval-shaped hill formed by the movement of glaciers thousands of years ago. And if you venture to play golf at Island Resort & Casino on the Upper Peninsula of Michigan in the future, you're going to play golf on one.

That's because it's the main feature of Sage Run, the resort's second Paul Albanese/Chris Lutzke-designed course, set to debut late this summer.

Despite being designed by the same duo as the resort's original course, Sweetgrass Golf Club, Sage Run will have a very different feel. Sweetgrass' tract of land slopes gently from the clubhouse down toward the fourth green and fifth hole, while the terrain at Sage Run is dominated by the aforementioned drumlin.

Another point of contrast: at Sweetgrass, water comes into play on eight holes. At Sage Run, that number drops to one or two, with no forced carries.

Sweetgrass' main environment is almost prairie-like, while Sage Run is cut out of dense forest. Still, Sage Run's corridors will be very wide.

At Sweetgrass, the fairways are generous, but if you stray, you may end up in some fairly lush primary rough. At Sage Run, the plan is for all regularly maintained grass off the putting surfaces to be cut at fairway/tee height.

That grass, by the way, will be slightly different at Sage Run. Whereas Sweetgrass has bentgrass throughout, Sage Run's fairways will be bluegrass. The more expansive look and feel of Sage Run lends itself to a hardier, more rustic looking grass, which will be able to be maintained firm and fast. That means you can expect your drives to get plenty of run at Sage Run.

Only seven holes have been grassed (the rest will sprout this spring and summer), but it is already apparent that Sage Run will have a number of standouts.

When we toured the course site this past August, we took particular note of a two-hole stretch on the front nine. First, the par-3 fifth hole, which climbs the northern portion of the drumlin, figures to be the course's most challenging one-shotter, at up to 250 yards from the tips. The next hole, a 470-yard par four, will tumble straight down the far side of the drumlin, before number seven, a short par four, mounts it again.

The way Albanese and Lutzke have elected to play with this feature throughout the routing, interacting with it from different angles, underscores the attention to detail inherent in their style.

This being the case, you can expect to hit every club in your bag when you play Sage Run.

We can't wait to see it for ourselves.

For more information on Sage Run and to schedule your next visit to Island Resort & Casino, click here.

Just played this course and it is junk, do not waste your money. They opened way to early I will not go back.

Stay and play at Island Resort and Casino each summer. I have played Sage Run's sister course (Sweetgrass) and it's very good, hosts a Symetra Tour "Road to the LPGA" event for six years and the players rate it highly. Stoked to see how Sage Run turns out. The course designer is Paul Albanese, who authored Sweetgrass as well. If you consider visiting, check out the Perfect Foursome package on the IslandResortandCasino.com website. It pairs Sweetgrass with TimberStone and Greywalls, all in the Upper Peninsula, and all well regarded.