Golfers can savor Sweetens Cove by playing golf in rural Tennessee or sipping its bourbon.

There's a lot of positive mojo happening at Sweetens Cove Golf Club in tiny South Pittsburg, Tenn., 30 miles west of Chattanooga near the Georgia-Alabama border. Who would have thought that a little nine-holer in rural Tennessee would carve out such a celebrated reputation in a crowded and competitive industry like golf?

"When we got involved at the tail end of 2018, the course had had a precarious existence," recalls Mark Rivers, the co-founder of Sweetens Cove Spirits and managing partner of Sweetens Cove Golf Club. "It was beloved in its own way. It had been held together by (owner and architect) Rob Collins, duck tape and glue.

"We got involved to preserve and protect it. If golf had national parks, Sweetens Cove would be one of them. ... It is counter to country club culture. It celebrates golf in its purest form."

Rivers is part of an ownership group that includes Peyton Manning and Andy Roddick and has transformed the Sweetens Cove experience, both at the course and with a new line of bourbon whiskeys launched in 2020.

"There is a certain parallel to our bourbon and golf," Rivers says. "Both are a hidden treasure but high quality. We are committed to do [them] in the right way." 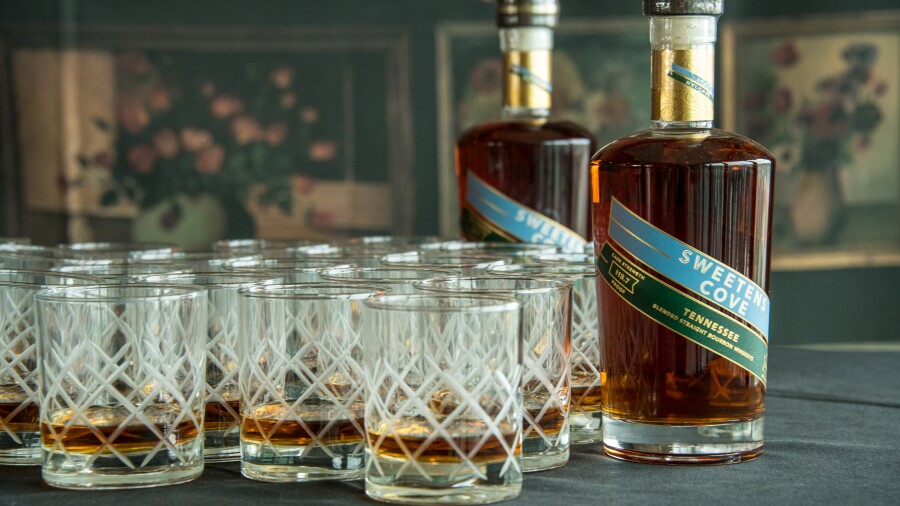 The Sweetens Cove released its 2021 bourbon in a commemorative bottle. Courtesy photo

Rivers said the idea for making bourbon was inspired by watching so many groups drink a shot on the first tee before the round.

“We saw the ritual that preceded our involvement (at Sweetens Cove)," he said. "They would bring their own bottles. We thought it was romantic."

The first blend launched in 2020 in the heart of the pandemic when no bars or restaurants were open to serve it. Not ideal, obviously. The 2021 Sweetens Cove bourbon, sold in a commemorative bottle with blends aged 4, 6 and 16 years, costs upwards of $200, a price point that attracts only discerning sippers. The 2022 Kennessee was created from a mix of barrels from Kentucky and Tennessee by Master Distiller/Master Blender Marianne Eaves. Rivers calls her a "unicorn" in the industry for her talent. Its price point of $60 is meant for mixing cocktails like the old fashioned and mint julep.

Sweetens Cove bourbon is now available in nine states. The plan is to turn out multiple bourbons, including a premium like the 2021 bottle, every year moving forward. "We love the craftsmanship," Rivers says of the Kennessee. 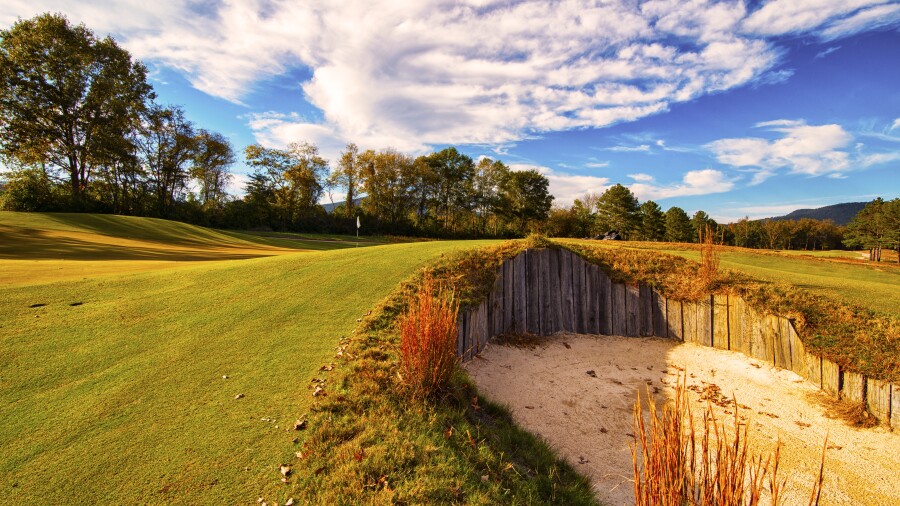 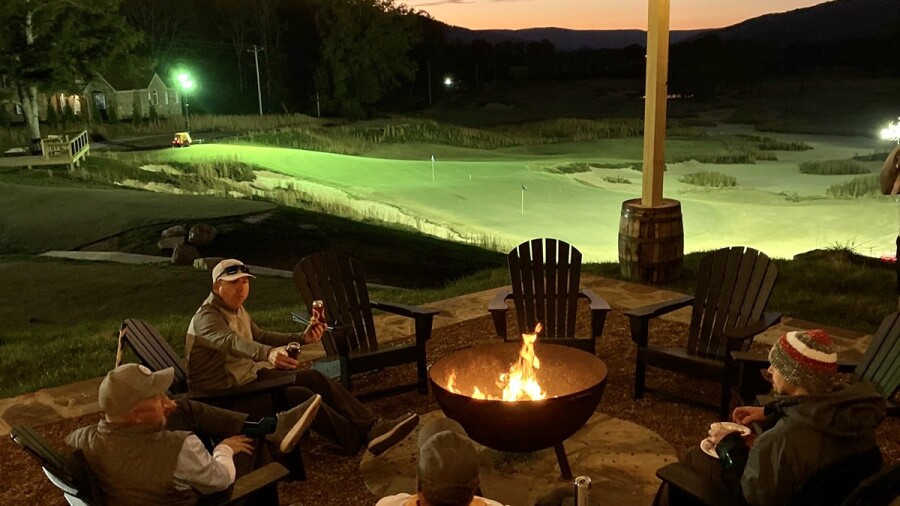 Golfers gather around a firepit at Sweetens Cove. Courtesy photo 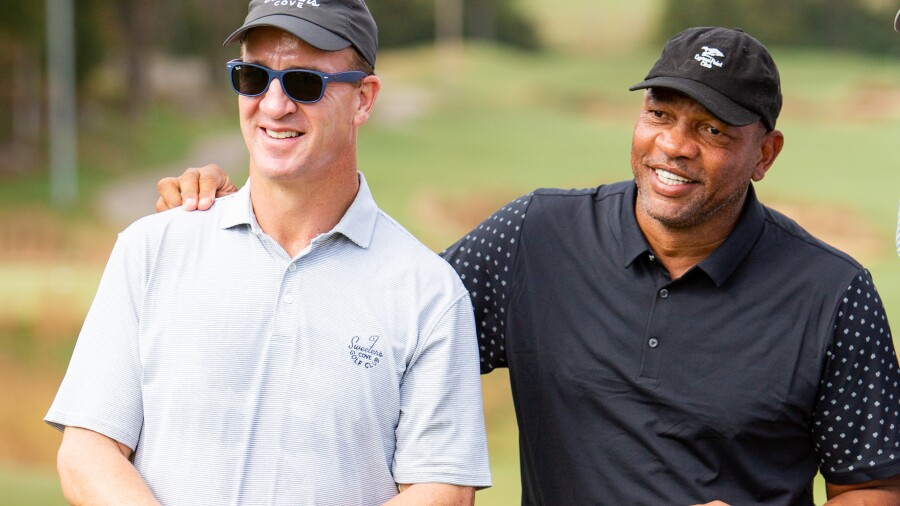 You never know what celebrity owner you might see at Sweetens Cove. Courtesy photo

The irony of it all is that nobody can buy Sweetens Cove bourbon - or any other alcohol - at the course. There's no clubhouse to drink it in and no liquor license to serve it.

The course operates out of a wooden shed. If golfers want to partake in the traditional first-tee shot, they will likely need to stop at Andy's Liquor on US-72 to stock up.

Sweetens Cove which dates to 2014, doesn't sell tee times anymore. Golfers who want to play need to buy weekday 9- and 18-hole tickets on Tuesday and Wednesday or all-day passes from Thursday through Sunday for $115 walking and $165 riding. Wilson calls the daily passes the "best value in golf", especially for diehards who try to log as many holes as possible. With the course's popularity and golf travel starting to pick up again, online reservations are rapidly selling out in 2022.

Sweetens Cove has ranked among the state's top nine courses in Golfers' Choice every year since 2016. A five-star review by Blackburn1984 in 2021 recounts a memorable January day battling the course's legendary greens: "Purchased an all-day pass and played 40 holes without having to wait for more than 1 or 2 shots. Loved how they manage the amount of people out there to benefit speed of play. Course was in excellent shape despite a little bit of casual water here and there. Greens rolled extremely well. Each hole had a distinct challenge and required different shots. Obviously the show stopper here is the greens, which are wild and comically difficult in some places, bordering on unfair but that is the whole allure. Once I stopped keeping score and just hit shots, I had the most fun."

The celebrity ownership group has added some upgrades since taking over - new drainage, permanent bathrooms to replace the Port-a-Potty, an outdoor pavilion, a firepit and a heckle deck above the ninth green. Beyond that, they all want to keep Sweetens Cove's blissfully low-key vibe intact.

A few lucky golfers have enjoyed random encounters with celebrities who might be in town with Manning, Roddick and friends. They gather every fall for a founder's outing.

"Everybody really enjoys playing out there. One of the great attributes is it's so casual and enjoyable. It is easy to be out there," Rivers says. "There have been some occasions, where Peyton or Andy or Jim (Nantz) wander around course while playing. (They say) 'Can I play this hole with you?' I went out there and Jim was calling random play by play (for a golfer). He call it the 'Rocket Mortgage shot of the day.' Where else does this happen?"