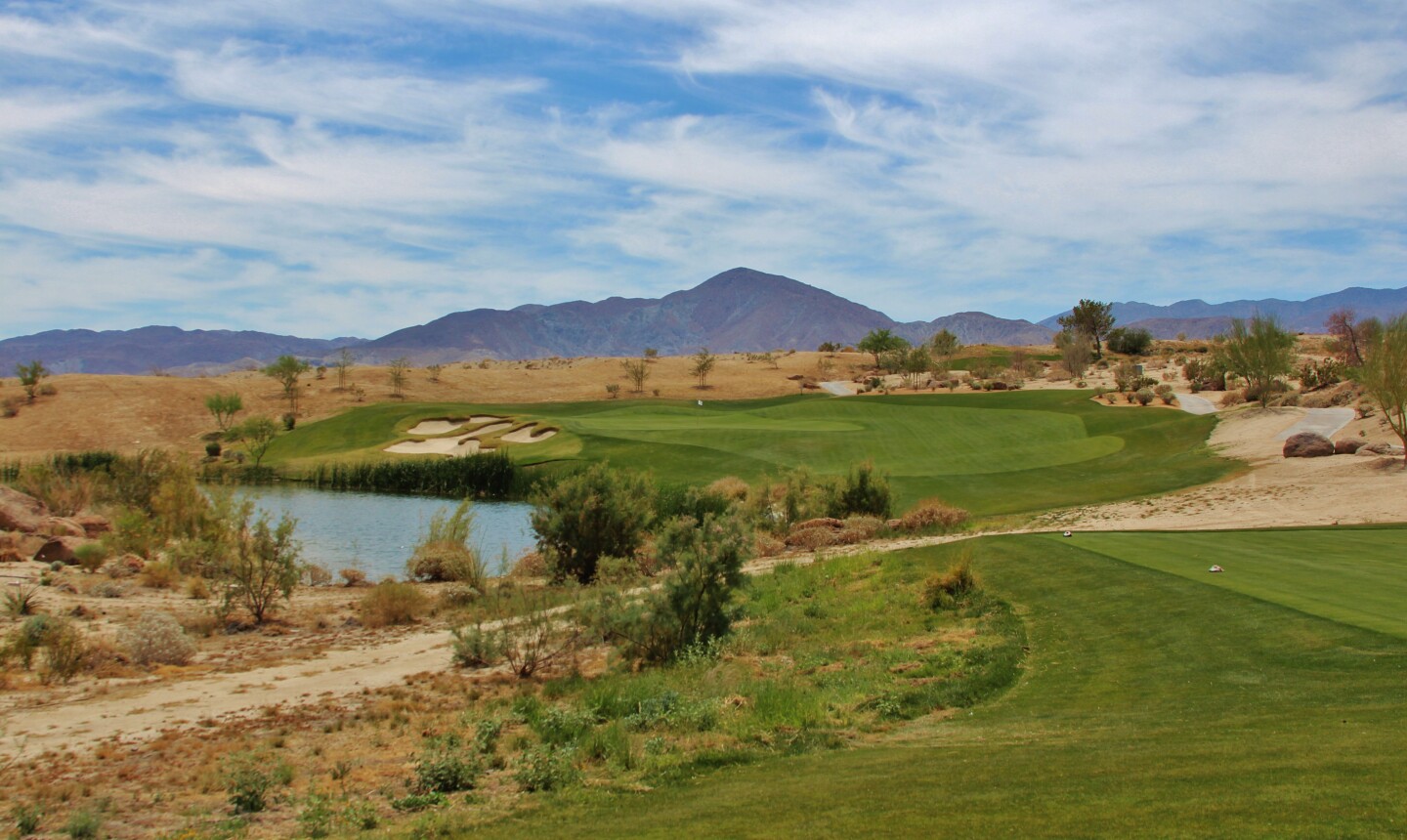 Rams Hill Golf Club might be the most scenic round of golf in southern California not on the ocean. Jason Scott Deegan/Golf Advisor 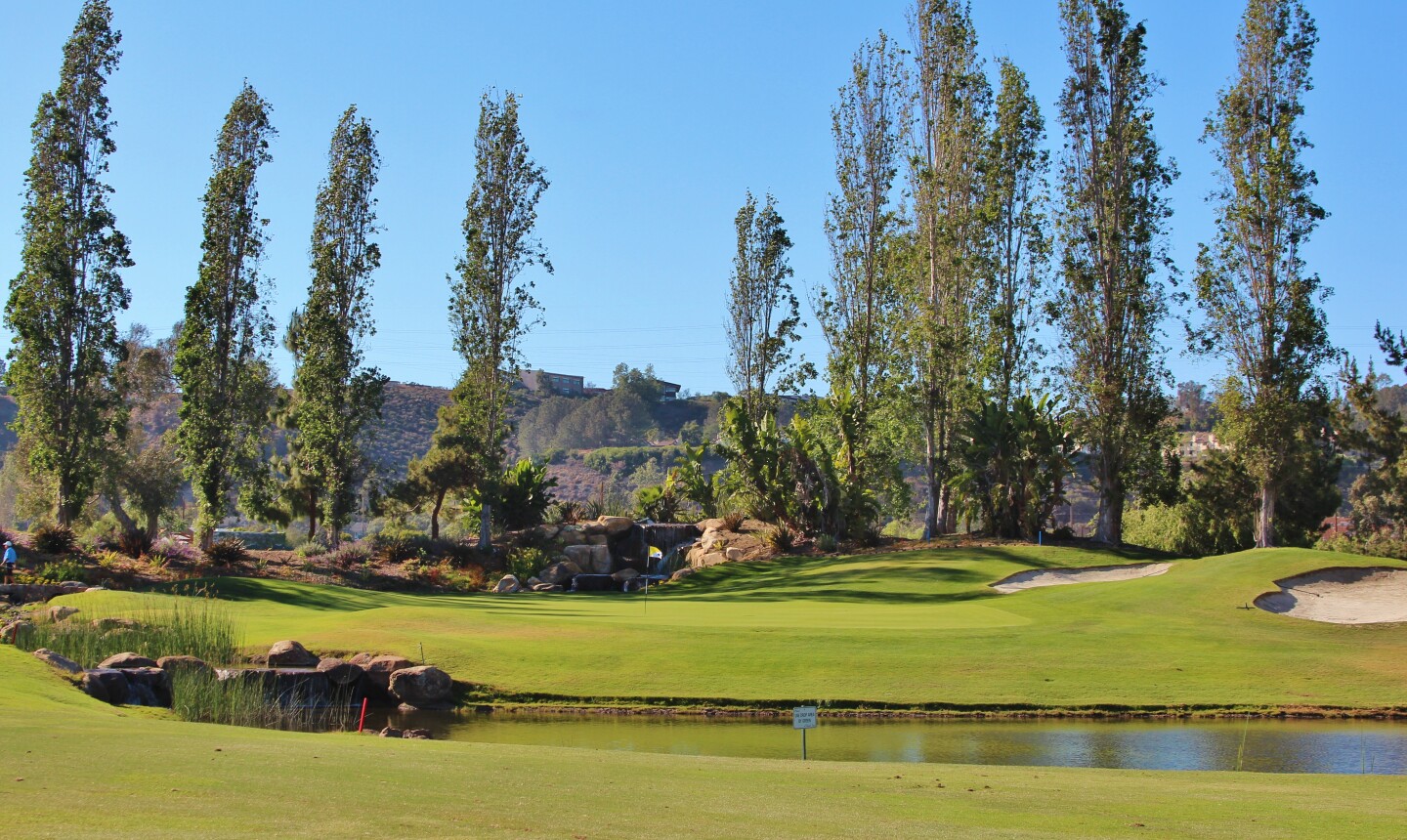 The third hole on the Mission nine at Riverwalk Golf Club doglegs left toward a green featuring a pond in front and a waterfall for decoration. Jason Scott Deegan/Golf Advisor 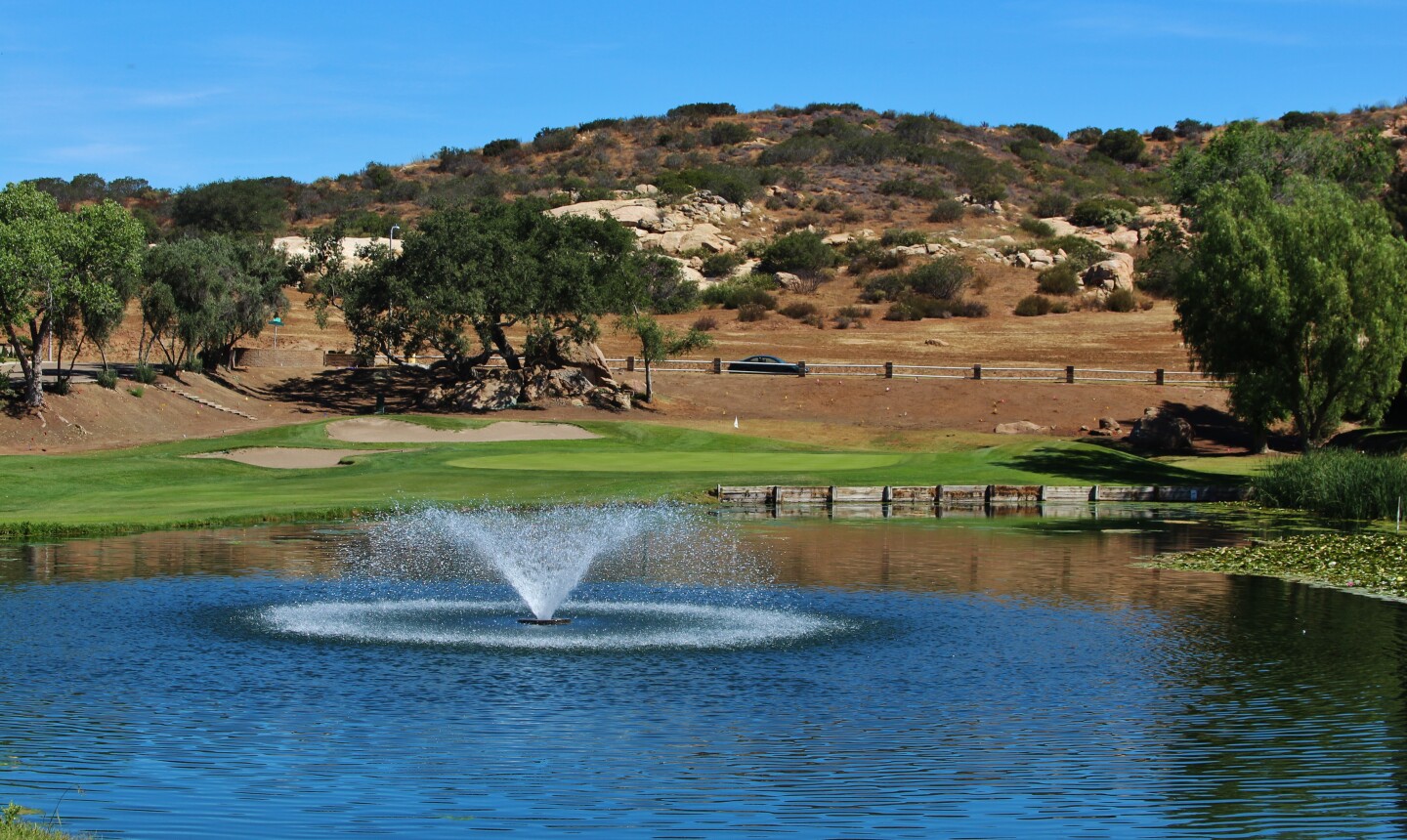 Shrubs and trees will be planted on the 12th hole at San Vicente Golf Resort to make the par 3 even more scenic. Jason Scott Deegan/Golf Advisor 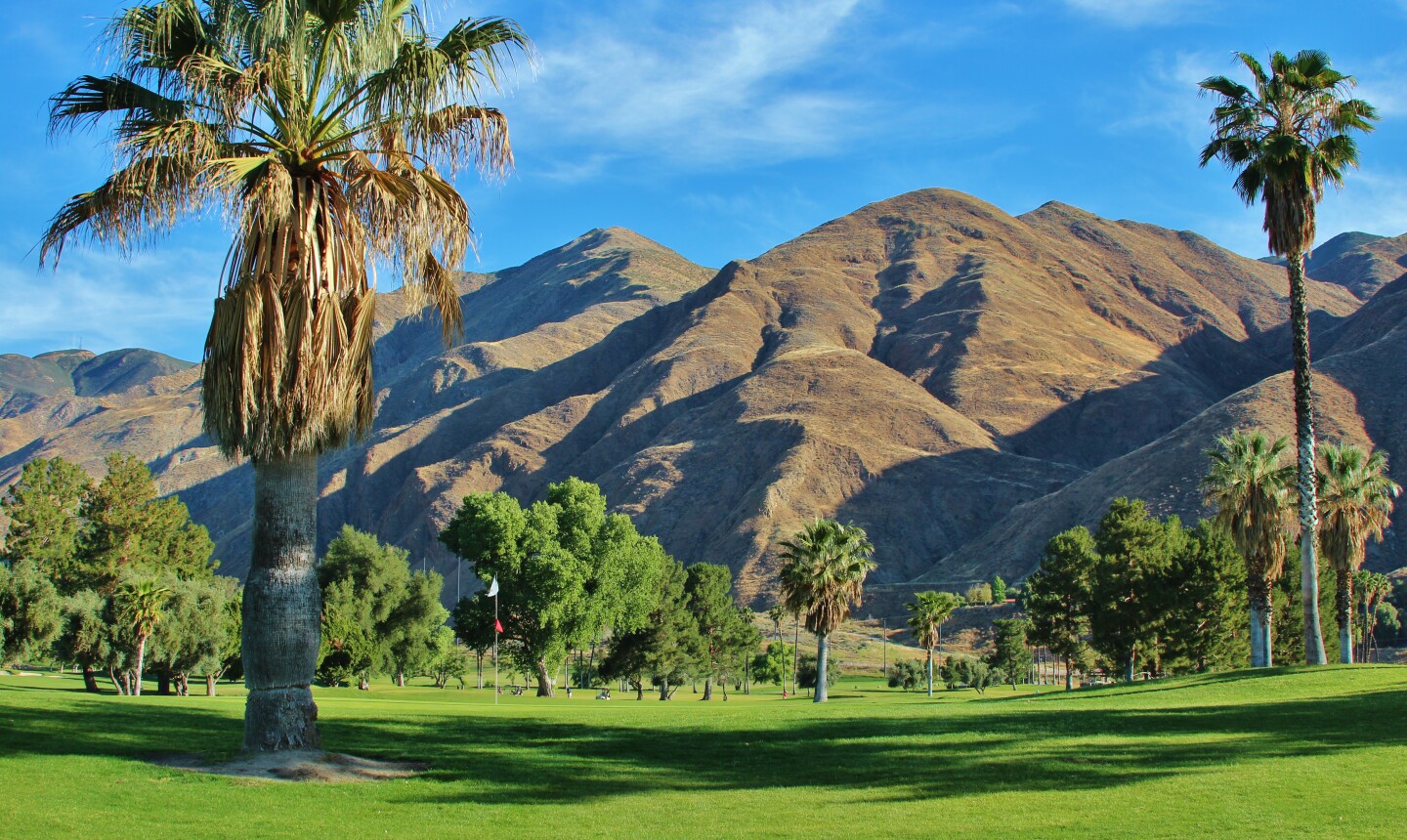 A look back from the first green of the Country Club at Soboba Springs showcases the beautiful mountain backdrop. Jason Scott Deegan/Golf Advisor Watching the ball drop off the dramatic 18th tee is the signature moment at the Golf Club at Glen Ivy in Corona, Calif. Jason Scott Deegan/Golf Advisor

SAN DIEGO -- No sane golfer schedules their trips like a golf writer.

My latest visit to southern California featured a mad rush from course to course, driving 50 to 100 miles each day. Within an hour of landing on a Tuesday, I was on the first tee in the heart of San Diego. On that Friday, I walked off an 18th green in the middle of the desert two hours from the airport.

In between, I sampled 108 holes on golf courses I had never heard of before booking. I drove by plenty of famous tracks -- Barona Creek Golf Club and Coronado Golf Course, for example -- and still don't feel like I missed out on much.

Everywhere I played was a four-star-caliber layout with excellent and fast greens. It's a credit to the depth and quality of southern California golf that these places exist without much fanfare from national magazine raters. The locals love them, and any tourist who isn't locked into staying on the coast will, too.

It took just 15 minutes once I got my rental car to reach Riverwalk Golf Club.

The piece of land housing the 27-hole course has so much golf history on it. Riverwalk's Mission, Friars and Presidio and nines are the third reincarnation of golf along the San Diego River. The old Mission Valley Country Club hosted an early edition of the Farmers Insurance Open called the San Diego Open Invitational from 1957-61, twice crowning Arnold Palmer as champion. Mission Valley was renamed the Stardust Country Club in the 1960s, while continuing to host several more professional invitationals won by legends such as Gary Player (1963) and Billy Casper (1966). The construction of the San Diego Trolley in the 1990s forced a complete redesign, and Riverwalk was born.

Riverwalk is both convenient and cool. The watery Presidio and Mission Courses are the preferred loop. The club has bought into staying up to date on the thriving local craft beer scene, keeping new flavors and brands on tap. Golfers can purchase large growlers that keep four beers cold throughout the round. I only had a taste of one at the bar. I moved on to find a slower pace of life at San Vicente Golf Resort in Ramona 35 miles northeast of downtown.

The room, one of 28 recently remodeled in San Vicente's AAA 3-Diamond Lodge, was plenty spacious and comfortable for a good night's rest.

San Vicente's old-school charms won me over immediately. I teed off with the men's club and couldn't have felt more welcome to their little paradise. The setting in the hills is lovely. The 6,633-yard design is undergoing a million-dollar turf reduction program to save on water costs. Wood chips or native plants will replace roughly 18 1/2 acres of grass on the layout's perimeter by the end of the summer. The ponds impacting the first and third holes and No. 14 have been rebuilt with liners to keep from losing water.

After golf, I fueled up on a outstanding salad in the Oaks Grille & The Par Lounge to prepare for the winding roads leading to the Eagle Crest Golf Club in Escondido. Eagle Crest, a David Rainville design dating to 1992, looks more like a jungle than San Vicente, roaming through a wildlife preserve in the secluded San Pasqual Valley. Eight lakes, thick vegetation and natural hillsides form a solid 6,537-yard routing. It's a challenge not to lose too many balls in the water holes of the back nine.

This was my favorite day by far. The golf courses really surprised me.

The Country Club at Soboba Springs in San Jacinto -- located 85 miles southeast of Los Angeles near Hemet -- looked in good enough shape to host the Soboba Golf Classic all over again. The club hosted the Nationwide Tour event from 2009-2012. I surpassed the 65 a young Rickie Fowler shot during a 2009 tournament round after halfway through my back nine. The rock-lined water features and backdrop of the mountains really give the course character. If I was local, Soboba Springs, owned by the Soboba Band of Luiseno Indians, would be on my regular playing rotation.

Normally playing the final round of back-to-back 36-hole days is torture, but the scenery of the Golf Club at Glen Ivy in Corona kept me going strong. I started on the dramatic, downhill, par-5 10th hole. The back nine climbs to new heights from there, culminating in a memorable 200-foot drop off the 18th tee, one of the biggest elevation changes on a golf course in the United States. I'm a lowball hitter, and I still counted a full nine seconds before my ball landed in the fairway. What a ride!

Day 4: A flower in the desert blossoms again

My grand finale was discovered in remote Borrego Springs 90 miles northeast of San Diego -- Rams Hill Golf Club, one of the best public courses in SoCal.

The winding canyon roads I drove within the Anza-Borrego Desert State Park, the biggest state park in California, reminded me of the road to Hana on Maui. The scenery along the journey to Borrego Springs is beautiful. It's all the constant hairpin turns and getting stuck behind slow traffic that gnaws at you.

Rams Hill has a checkered past, starting as a 27-hole Ted Robinson design in 1983. In the 2000s, Tom Fazio was hired to redesign the routing. The renamed Montesoro Golf & Social Club had a short-lived run from 2007 to 2010 before closing at the height of the recession, leaving property owners who bought homes in the neighborhood high and dry.

Where others saw disaster, Bill Berkley, a Rancho Santa Fe real estate investor, saw potential. He bought the development for pennies on the dollar in 2013 and spent millions to revive the course, remodel the clubhouse and solve the water issues that scared away other suitors.

Rams Hill, which reopened in November 2014, might be the most scenic round of golf in southern California not on the ocean. Mountains tower in the backdrop. Gorgeous bunkers and water features threaten every shot. Firm and fast conditions and Fazio's shaping sometimes require a ground game. Choosing the right club and shot is always tricky.

After golf, I had just enough time to sample the outstanding food in the Yacht Club Grill in the clubhouse. I would have loved to stay longer. I had a flight to catch, unfortunately, and some narrow roads to navigate back to civilization. Such is the life of golf writer -- always driving, on and off the course.