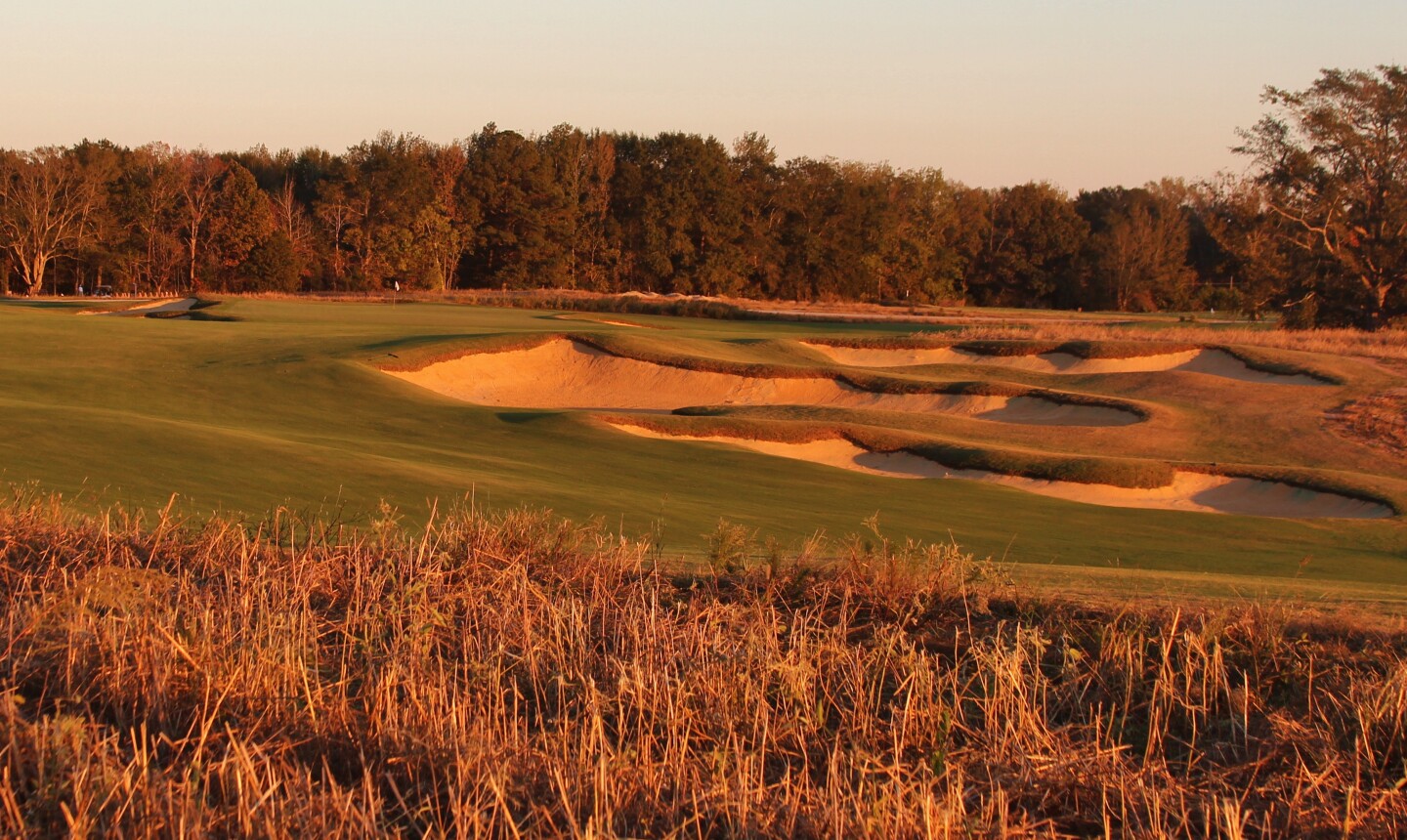 Mossy Oak Golf Club has more than 100 bunkers, including these beauties along the fifth fairway. Jason Scott Deegan/Golf Advisor 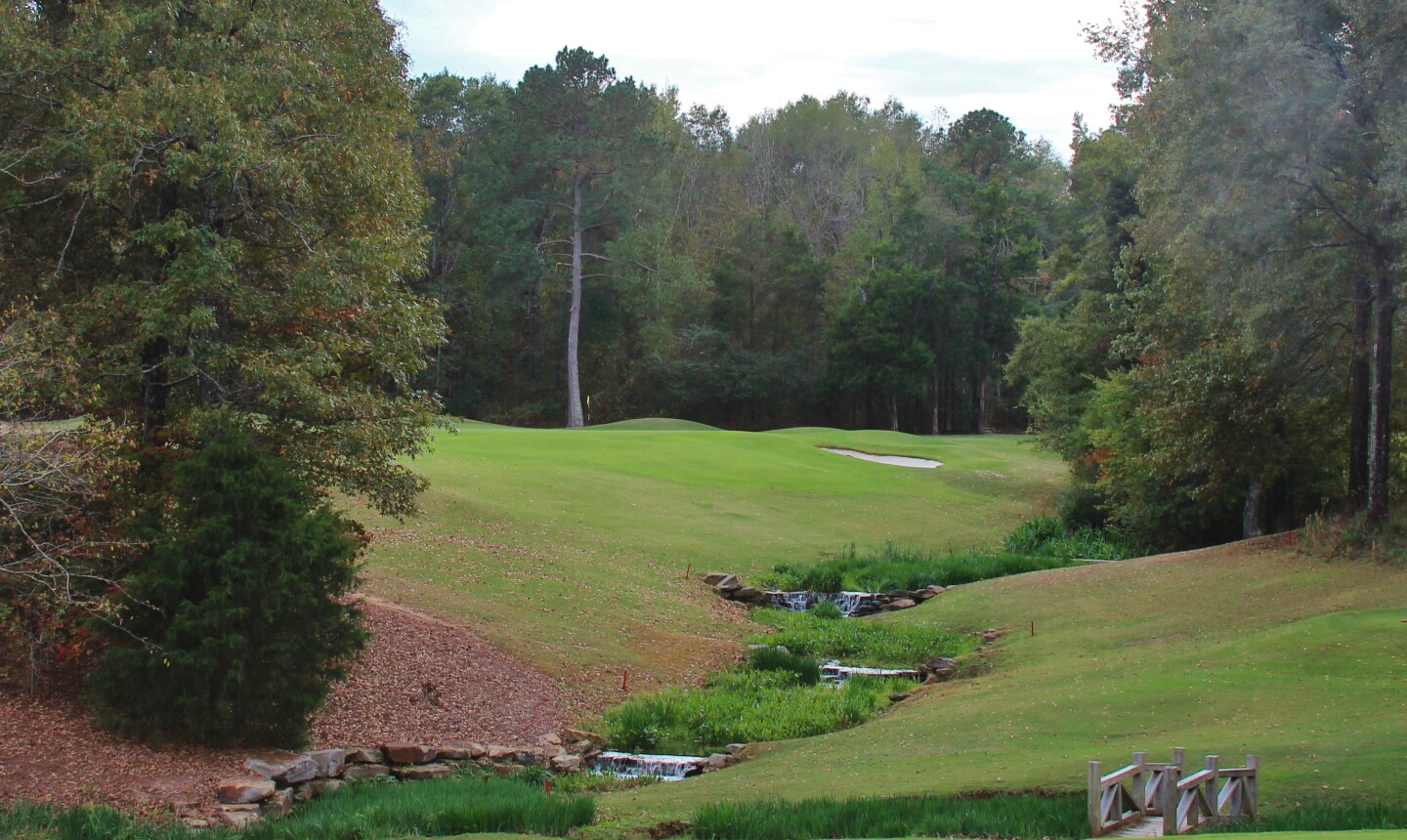 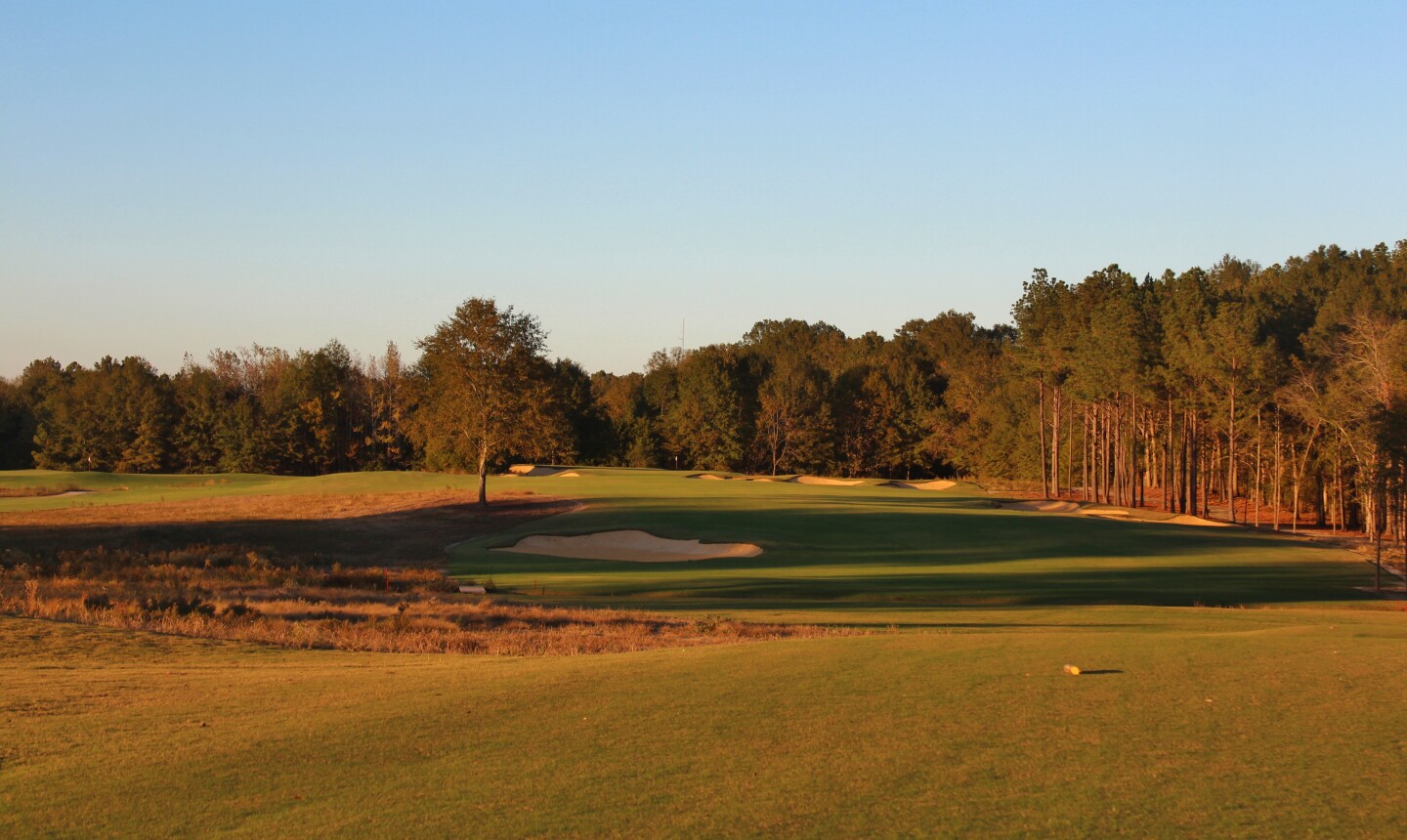 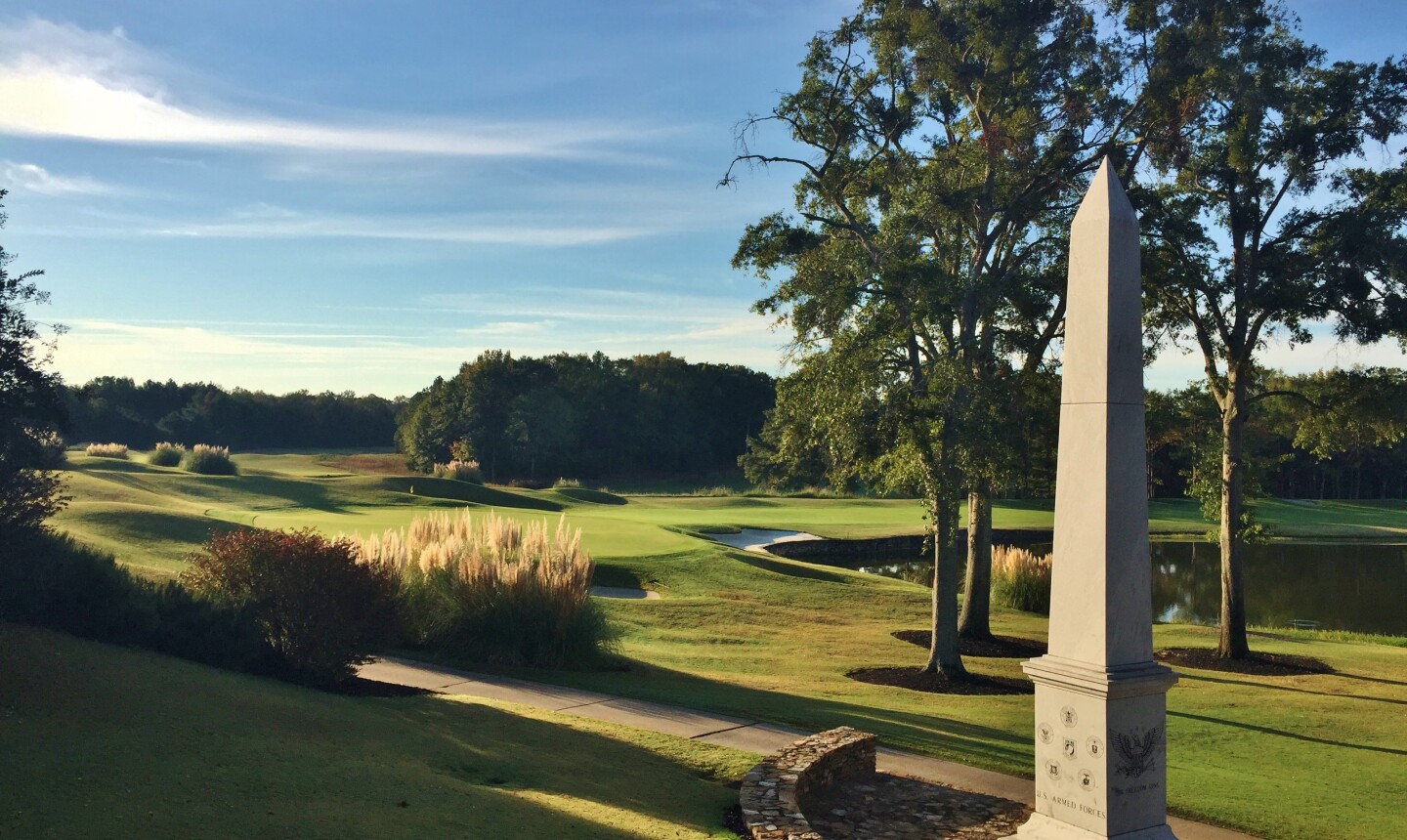 WEST POINT, Miss. -- Chris Jester and I stood on the third green at the new Mossy Oak Golf Club, looking back.

Jester, the club's director of golf, pointed to a portion of the fairway left of the green that I thought was part of another hole. He explained that a layup off the tee following that route might be the percentage play to set up an easier approach on the short, 299-yard par 4. Me? I like banging driver to the tongue of the elevated green, leaving a delicate pitch over a bunker from a tight lie.

Gil Hanse would be happy to hear this debate. He designed Mossy Oak to be the ultimate chessboard for golfers. It might take dozens of rounds before figuring out the best route on any number of holes. Mossy Oak is a maze of bunkers, ditches, blind shots, wide fairways, false fronts and engaging green surrounds that most golfers will never grow tired of playing.

Building a new course seems like risky business these days but not in the case of Mossy Oak. It occupies an old dairy farm across from the Old Waverly Golf Club, one of the classiest clubs in the South. When Old Waverly became semiprivate a couple years ago by allowing outside stay-and-play packages at its cottages, villas and condos, George Bryan, the original developer, needed another reason to attract traveling golfers. Why not hire the hottest architect in the game to create a dynamite public course to spice up the offer?

Forget any stereotype you've heard about Mississippi. This is a great spot with a growing SEC school, Mississippi State University, right down the road in Starkville, and some of the friendliest people you'll meet. I got my fill of Southern hospitality during a long golf weekend this fall.

A delayed flight from Atlanta to the nearby Golden Triangle Regional Airport in nearby Columbus ruined my Friday round. Dinner at Cameron's in the clubhouse at Old Waverly was a nice consolation prize.

There are multiple places to drink and dine inside the Waverly Mansion, a plantation-style building with stately columns and a Southern cupola. Cameron's, the bar upstairs, feels like a Scottish library. Be sure to check out the wall-sized painting of the Swilcan Bridge on the Old Course at St. Andrews in the adjacent room. Tables are also set up in the men's locker room if you just want to hang with the guys.

After a hearty breakfast buffet Saturday morning back at the clubhouse, I scratched another item off my bucket list -- an SEC football game. In a former life as a sports writer, I've been lucky enough to cover Big Ten games, but I've never experienced noise quite like a Mississippi State University home game in Starkville. Fans carry thousands of decorated cowbells into the stadium to cheer on their Bulldogs. Those things ring and ding until the quarterback starts his cadence. It's deafening, especially when the Bulldogs are beating Texas A&M, 35-28, in one of the upsets of the year.

By the time Jester and I teed off at Old Waverly in late afternoon, the course was mostly empty. Jerry Pate and the late Bob Cupp teamed up to design Old Waverly in 1988. Hosting the 1999 U.S. Women's Open remains the pinnacle for Old Waverly.

A mix of hardwood trees, stately homes and four lakes set the backdrop of Old Waverly. The sixth hole -- a sneaky par 4 over a pond -- and the par-3 seventh hole (where "Palmer Falls" decorates the setting) finish a fantastic loop of secluded holes through the forest. The large Lake Waverly dictates the strategy on the back nine, coming into play on five holes. The toughest, of course, is the last, a 445-yard knee-knocker of a par 4 with water seemingly everywhere. I made par in the heart of darkness to cap a magnificent day.

My home for my stay was one of the cottages, all within walking distance of the clubhouse. They are unique in that guests like me have their own bedroom and bathroom but share a common living space with a TV, fridge and fireplace.

A lesser architect than Hanse might not have pulled off Mossy Oak all that well. The site has some nice ridges and high points where you can view many of the holes, but it's the strategic elements that define Mossy Oak -- named after the popular camouflage apparel company headquartered in West Point. The wide fairways throughout the 7,212-yard course lull players into a sense of comfort. The problem is, when you're not in proper position, hitting the greens becomes a chore.

The fourth hole on Mossy Oak

My favorite hole is, without a doubt, the 10th, a drivable par 4 that turns on the right blinker at the green. At 282 yards from the blue tees, it plays more than 250 yards, so anybody can reach. The proper line, by the way, is further left than almost anybody imagines -- another in a long line of deceptions by Hanse.

Later, on the par-5 12th hole, Jester and I faced similar pitches to a dangerous pin on a shelf of a severely elevated green. We spent several minutes practicing shots, some rolling back to our feet when they caught the fall line.

Caddies are required on Mossy Oak, so they should be able to warn players about making the same mistakes we did. Immediately after finishing, I wanted another crack at the course, a feeling shared by virtually all.

Cottages and a permanent clubhouse are part of the long-range plan at Mossy Oak.

That afternoon, I spent more time aiming at targets -- this time with a shotgun shooting clays at Prairie Wildlife, a sprawling natural preserve that offers Orvis shooting and fly-fishing schools, hunting, horseback riding and off-road driving in LandRovers. Much like Mossy Oak -- which promotes the tagline "Nature's Golf" -- Prairie Wildlife promotes a natural escape from the crush of everyday life. Many premier golf resorts -- the Greenbrier and the American Club, for example -- feature shooting schools as well, so this could turn out to be a key partnership in attracting and entertaining corporate groups and buddies trips.

It might be tough, however, to pull groups away from the golf courses. They're completely opposite in style and feel, but the perfect combo to put this out-of-the-way destination on the map.