Shannon Greens Golf Club (formerly known as Clarendon Golf & Country Club) in Santee incorporates three different lakes, Lake Santee, Lake Marion, and Lake Moultrie. Santee is one of the East Coast's premier golfing destinations and Shannon Greens still manages to stand out among the area's great courses. The golf course sprawls across gently rolling hills studded with towering California pines. It is definitely a shot-maker's course that will require the use of all the clubs in your bag. There are challenges in store, but it is a fairly open layout that is much more forgiving than it seems though golfers will have to contend with a lot of water. The course offers some great scoring opportunities, making it easier for beginners to approach with confidence. Shannon Greens Golf Club's 16th hole is one of the most memorable and scenic holes thanks to its island green.

This course/club is great for:
Locals 7

A tournament was booked to start at the same time my tee time was scheduled. They did not do a shotgun start and had all members starting at hole #1. Staff was running around trying to get the tournament going, but when you had their attention they were friendly and courteous. The fairways were unkempt and balls were lost in tall grass where they should’ve been easy to find. Grass clippings remained in the rough as well. It was a cheaper day fir golf, but the hour of travel will keep me from visiting this course again in the near future.

Staff was great and very friendly. Course was a challenge. Family had a great time.

This is a very challenging course. We had a reserved Tee time but was allowed to hit em earlier. There are many water spots and the island hole is Difficult. My group had a very enjoyable trip and we WILL be back !

bulldoze and start over

We played on a COLD(34*) windy day and had the course to ourselves. That and the friendly pro in the shop were the positives. Everything else about this place from the carts that were falling apart, cigarette butts in them, cracked windshield/taped together seats, to the driving range nets that were in tatters and falling down, greens plagued with bluegrass, non existent cart paths, fairways that existed only because the weeds had taken over and a club house that has original retro furniture and amenities. Save yourself the trouble and bypass this goat track on your way over to Wyboo.

Guys you need to revisit the course. The grounds keeper has really improved the course. It is back to a great playable course. Still no amenities but if you just want a round of golf, then Shannon Greens is the place to play. Can't beat the fees. Also have new carts!

The greens and tee boxes were painted green with large areas on some greens that were re-sodded. The front of the first green looks to have eroded away due to a lack of grass. It was hard to find a blade of grass in the fairways, they are mostly just wild vegetation. When a course doesn't even have water coolers on the course it just looks like they don't care at all. I have played this course many times before and this is the worst I have ever seen it.

was a nice coarse that challeneged the player...the staff was excellent

No grass on fairways greens sparse and hard as a rock

Enjoyed my round. Lots of water and dog legs. I plan to play again.

It was a great deal

You will be pleased if you play here . I was skeptical from the negative reviews . The course suffered from the flood but they are working hard to improve conditions daily. I will be returning in the near future to play again

I PLAYED HERE IN MAY / 2016 AND THE OLD COURSE HAD LOST THE GREENS, I ASSUME TO THE BAD FLOOD / WINTER... I RETURNED TWICE IN THE LAST MONTH AND THE COURSE IS IN GOOD SHAPE. THERE WERE STILL A FEW SMALL SCARS ON A COUPLE GREENS FROM THE FLOOD, BUT OVERALL VERY PRETTY GOLF COURSE... GREEN ROLLED WELL, FAIRWAY & ROUGH CUT..

STAFF WAS VERY FRIENDLY AND I RECEIVED A SLEEVE OF GOLF BALLS , HOT DOG AND A DRINK AS A PROMOTION OF SOME SORT... OVER ALL VERY NICE... I WILL BE BACK

Enjoyed the par threes. Fairways a little rough but playable

greens were aerated week before and impossible to putt on. fairways were not mowed everywhere with either high grass or piles of mowed grass. cart paths in poor repair.

This course has a great layout

The Golf pro was very friendly. The course itself was in pretty rough shape. I would not bring people her to play. I had a great deal on Golfnow so I wasn't expecting it to be a great shape but it was still fin to get out and hit it around.

Not bad for the price

There are not a ton of courses to choose from in this area of Manning, SC. This course could be something really special if they invested some money into it. The design is well laid out and each hole is unique unto itself. It's obvious that this course does not have a full time maintenance staff as seen by the pics enclosed. The greens were probably rolling around 6 on a Stimp, at best. I was there to visit on a weekend and the place was pretty busy and a ton of locals controlled the course; but were SUPER friendly and talkative. I played during the week and i had the course to myself. I would recommend this course for new players or for a player who wants more than the driving range. Wasn't too bad for $20.

Scruffiest course I have ever seen

On the drive in I remarked that the course did not look good, and I was right.
The Tee boxes were in an awful state and the rough and fairways were indistinguishable. The greens were quite fast and many had severe slopes making putting very difficult. However, the greens were not bad, which can't be said of the bunkers which had grass growing out of the sand, what there was of it.
The signature seventh with it's island green was certainly a challenge hole, but lacked any wow impact due to the complete lack of any landscaping, which was a feature of the course.
There were no on course facilities like water fountains or lavatories. The bar/restaurant area was closed up in darkness so I went elsewhere for lunch
Not a good golfing experience.

Course is in rough shape. Bahai grass in fairways up to your knees. Many areas unmowed. Tee boxes are horrible. Greens are ok but need some tlc. Used to like playing here but over the last two years course has declined rapidly. 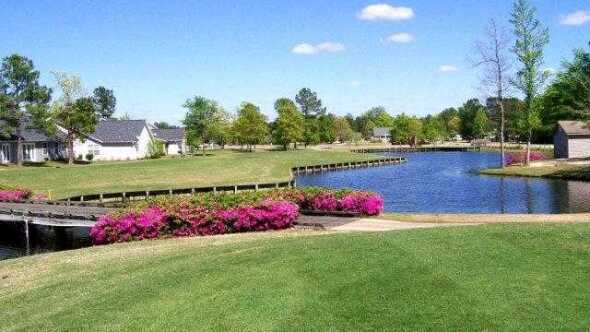 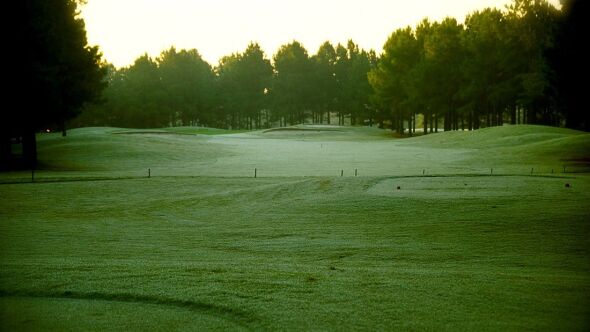 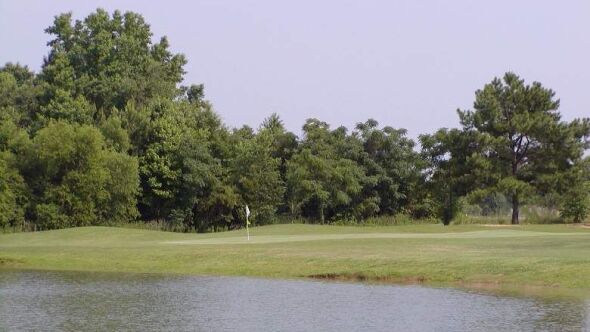 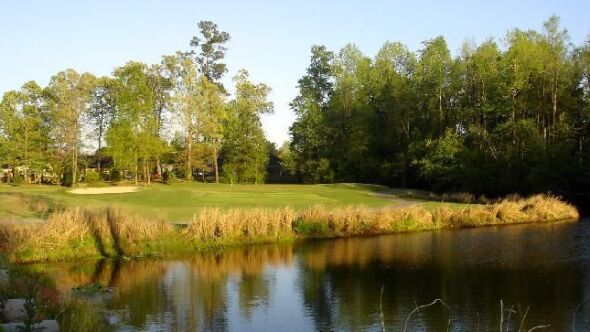 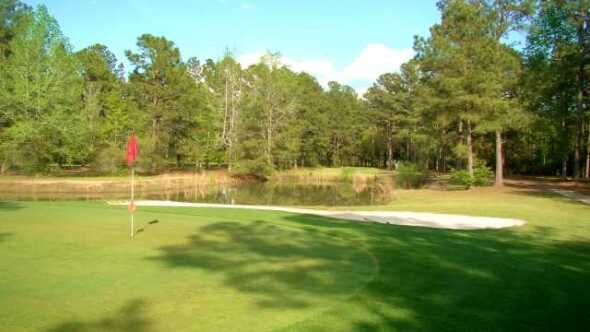 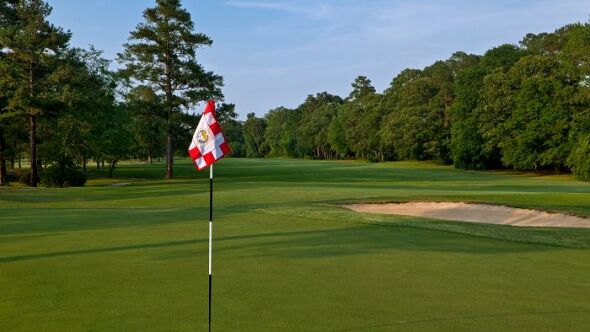 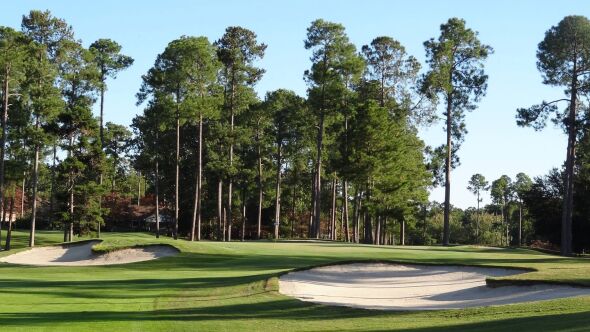 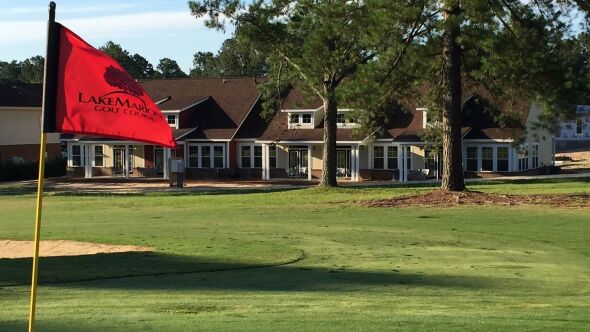 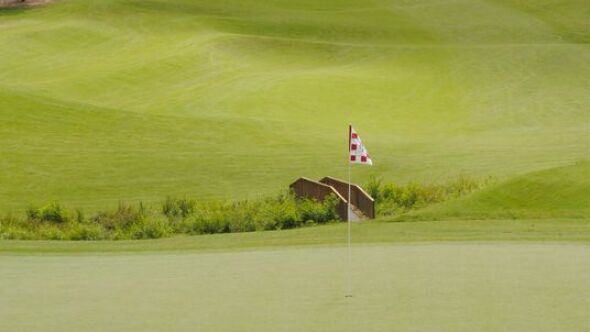 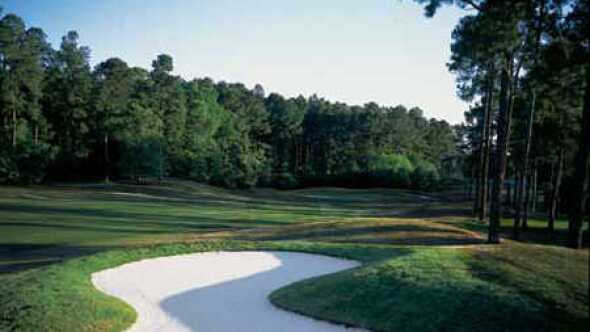 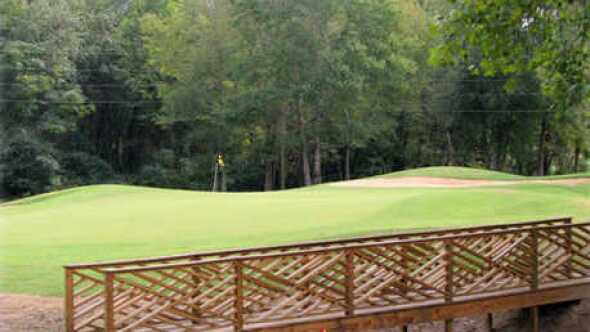 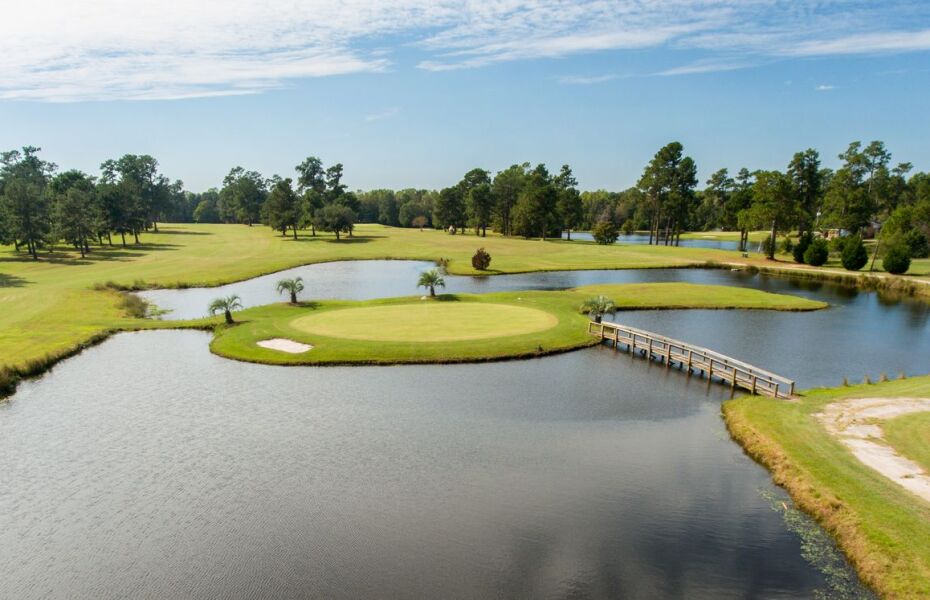 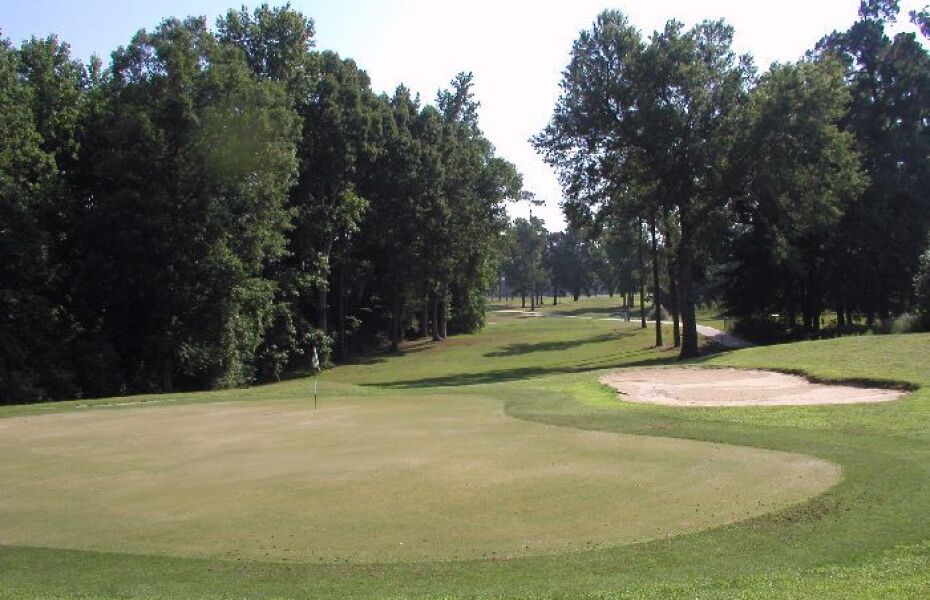 A view of the 2nd green at Shannon Greens Golf Club 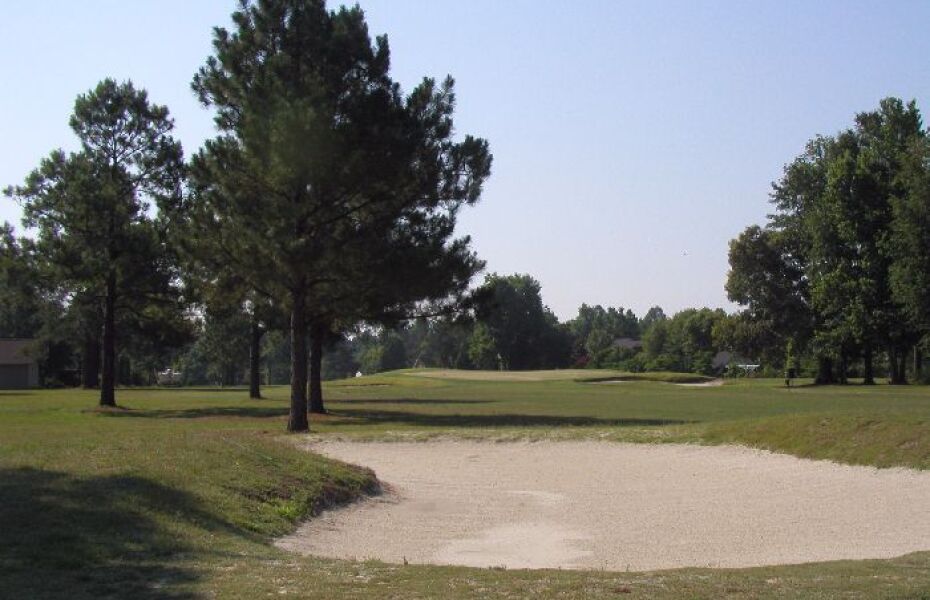 A view of the 3rd green at Shannon Greens Golf Club 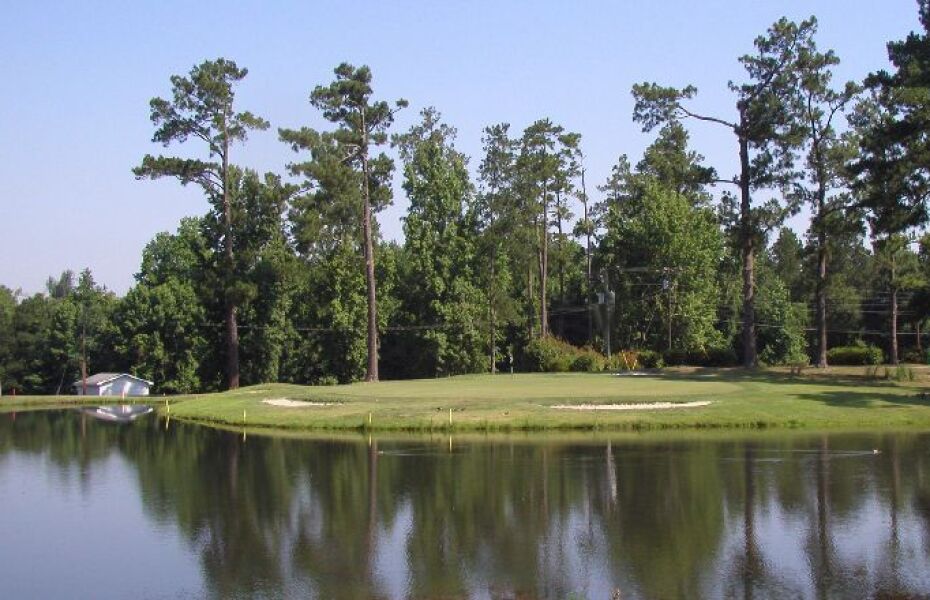 A view of green #18 at Shannon Greens Golf Club 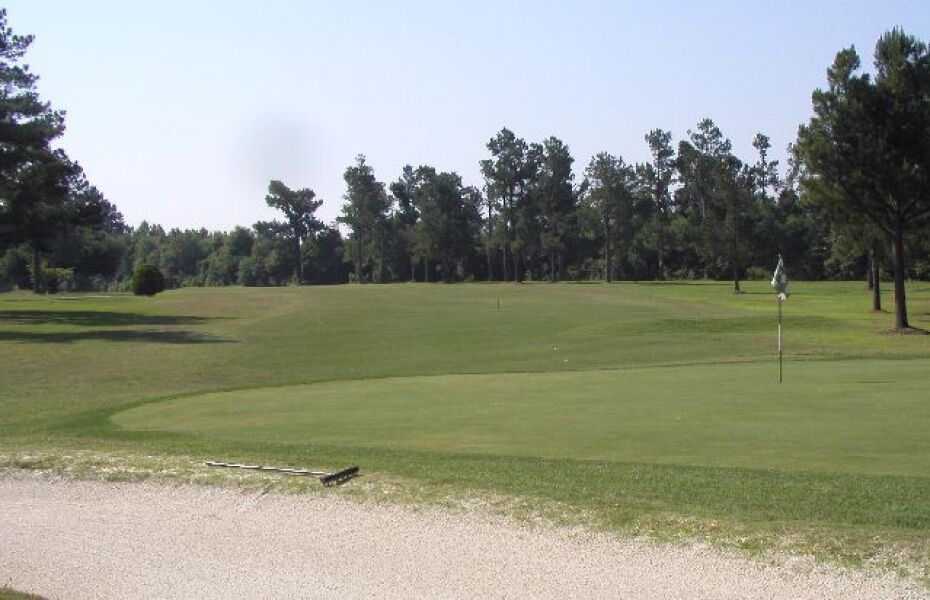