I have been playing the course now for many years. And I can say hand on heart it is currently in the best condition I have seen it in. There are a few things that need addressing (bunkers mainly) but over the last year it has been improving weekly. There are areas that have had a lot of irrigation work done recently that needs a bit of time and effort to get back to where they were but on the whole a good test for all abilities.

The course is in a awful condition, they seem to be trying to make it better, then seem to just give up and hope the grass will just grow.

Layouts a bit uninspired at times but it’s still a nice course, back nine I found had more character than the front. Everywhere’s pretty flat (could do with some raised greens/tee boxes) but greens are small and trees are plenty.

Has some nice driving holes and you can usually find your ball after miss hits, might need to play safe to get back on to the fairway but at least you have the chance to play out of trouble unlike other courses where missing the fairway by 10 ft means a reload.

We tee’d off at 11 and were waiting on a couple shots but nothing major for a dry Saturday. Course was in fairly good condition (well drained for the most part) after a cold wet week in the middle of winter.

Visited this course in early September it was excellent weather and the course was quiet. Some interesting holes to think through not a long course but enjoyed playing it very much. Well worth a visit

Found this to be a pleasant experience, the fairways were in great condition however the tee boxes were a little uneven and could do with some work, most of the greens were good however some appeared to be recovering from recent maintenance. Friendly staff however no facilities available due to current COVID restrictions, will definitely return for another round in near future.

This was a disaster.

The course, if one can call it a course, was in such a terrible state. At points it felt like i was wading through mud in a vietnam monsoon.

The greens were bumpier than a Madagascan road and the rest of the course wasn't much better maintained. I could review the fairways if I was aware where they started and the rough ended, but alas that seemed too much to ask for £36.

For some odd reason despite it being the wettest time of year trolleys were still allowed, and the tyre marks on most fairways, made it feel as if we were on beaches of normandy, on that note the Green looked like it had seen more bombs than the battle of the bulge.

There was molehills throughout and most teeboxes (if you could even locate them) were muddy and slippy, to keep your grip while driving was a task in itself.

The staff were not welcoming in the slightest and it felt as if we were interrogated at every turn about our appropriateness to play at this 'club', despite forking out £36 for the privilege.

One must only assume they are using the £36(!) each to raise the funds for a greenkeeper as they clearly don't have one currently.

Just a tip for anyone thinking of booking this club, there are plenty of others in the area that are a similar price and considerably better.

This was not a golf course it is a public park, it was not worth the extortionate fee that it required, I will not be returning.

Awful course, couldn’t tell the fairways from the rough. Like playing on a bad park.

Played today for the 1st and last time, The tee boxes, fairways, and greens were in a stocking condition.

Such a shame as the course could be nice with a lot of work, it really did look like the groundsman has been on holiday for 3 months

The condition of the greens was terrible. Putts kept being pushed off line by unrepaired pitchmarks and bare patches.

The bar staff are fine, but the greenkeeper was mowing the fairway on one hole so I couldn’t tee off. He didn’t even acknowledge me. I had to miss the hole and move to the next one.

Played this course for the first time yesterday. For £37 I was expecting something half decent. There was dug up holes next to tee boxes, wheat growing on the fairways. Greens were quite slow. It wasn’t a terrible course, but for £37 not worth the money. for £15-20 I would’ve been satisfied. It wasn’t on par for the value I’ll say that much.

The course is average, and a little overpriced for what it offers. However, the worst part is the pathetic attitude of the proprietor. He really could do with attending a crash course on customer service. I had seen reviews on this and other sites pointing at the poor attitude of the bald, middle aged gentleman who I make out to be the proprietor and didn’t quite believe some of them until a couple of recent experiences, which left me absolutely dumbfounded. You’d think he is offering customers a favour rather than selling a service.

Playing full greens in good condition for time of year , soft in places but not unplayable, staff are friendly and it has a range and putting/chipping green .

The only reason this has a 2 is because the greens were ok..
The fairway was like playing off a Sunday league football pitch.. The tee boxes looked like they had been attacked by a pack of wild boar.
But the worst part was the man behind the till, older chap, greyish short hair.. He is quite simply the rudest person I have ever dealt with.

so, we got to the course at 6.45 ready for our 7am tee time booked through Golf Now.. The gates were closed, we got his attention and he screamed back "GATES OPEN AT 7"... nice.
Anyway, 7am came and gates opened as promised. I went into the club house and said we had a 7am tee time that is why we were surprised the gates were closed.
he said " you can't have a 7am tee time, we don't start till 7:10" (the chap next to me was off at 7.08 by the way)
I said I booked online and it gave me 7am as an option
"well it shouldn't have" barked this cretin behind the till..
I said he should check with Golf Now then as I can control it
He then just grunted..
Then tried to take my payment again, even though I had already paid and moaned about having to check the system

All in all course is very average, the greens are ok but the rest isnt great. I do appreciate its the Autumn and we have had rain but its not in a good state. But the guy who served is is a grade a c.......

Won't be heading back here in a hurry 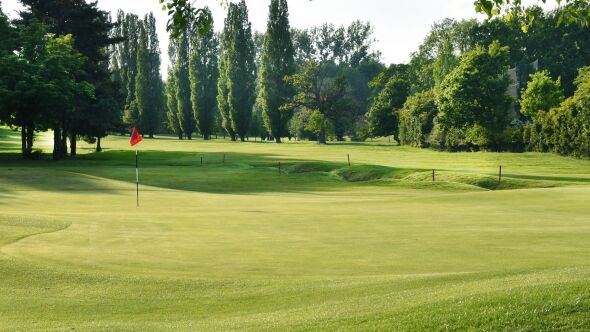 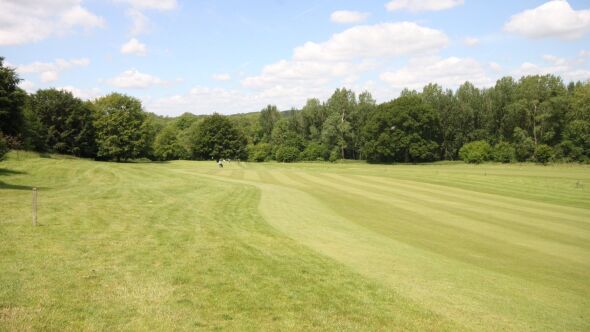 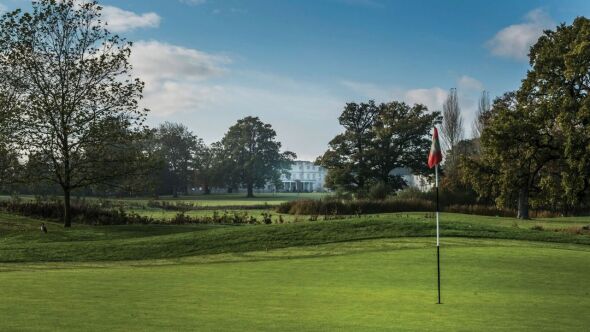 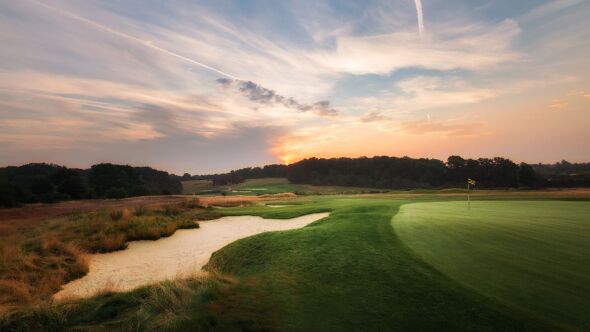 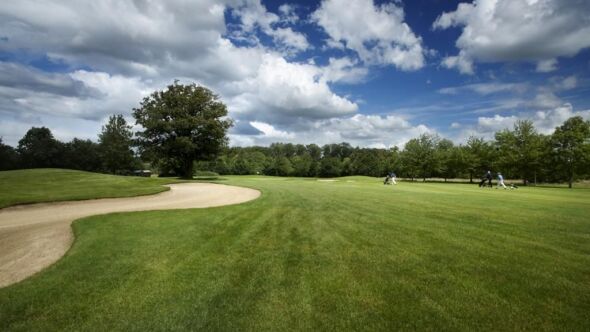 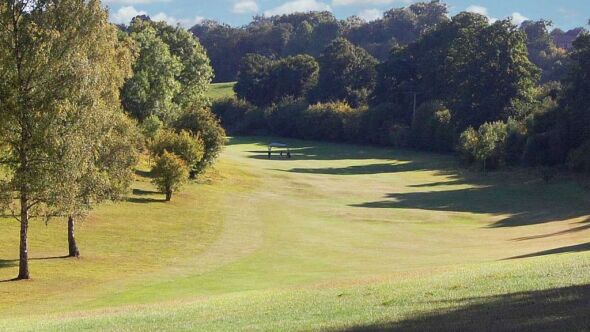 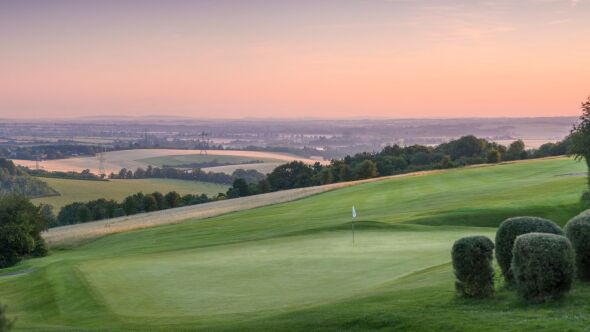 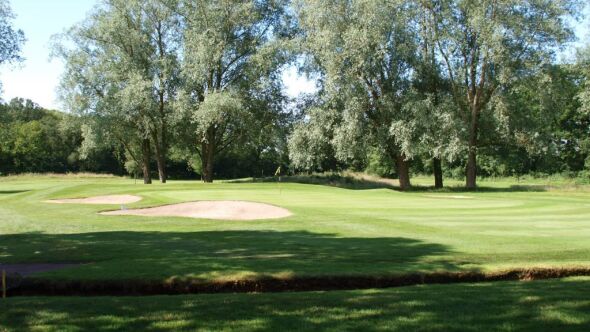 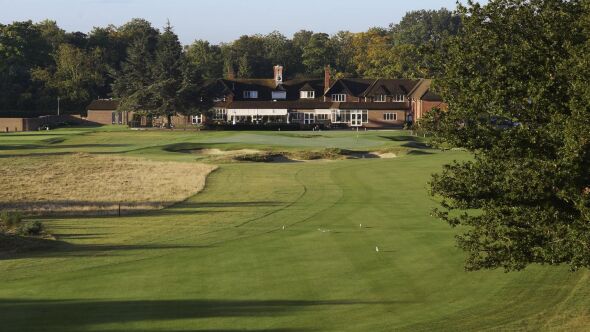 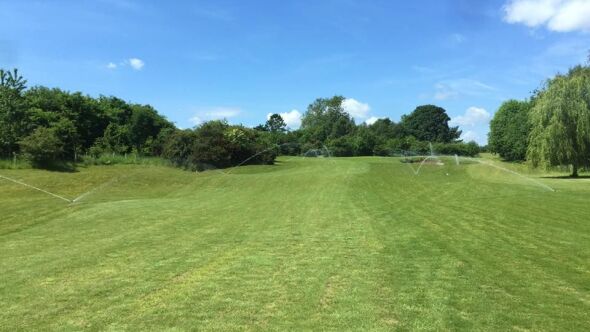 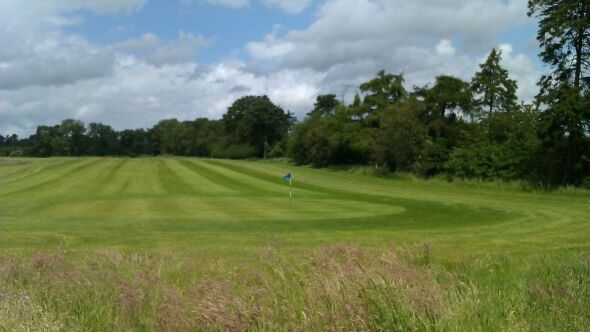 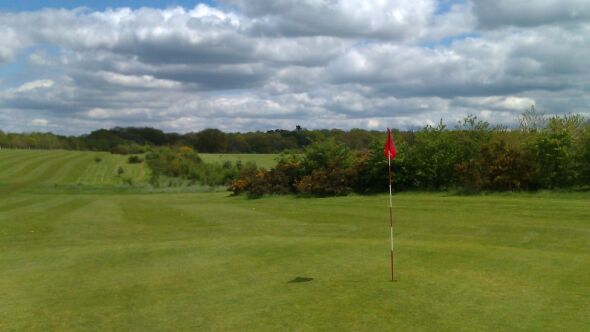 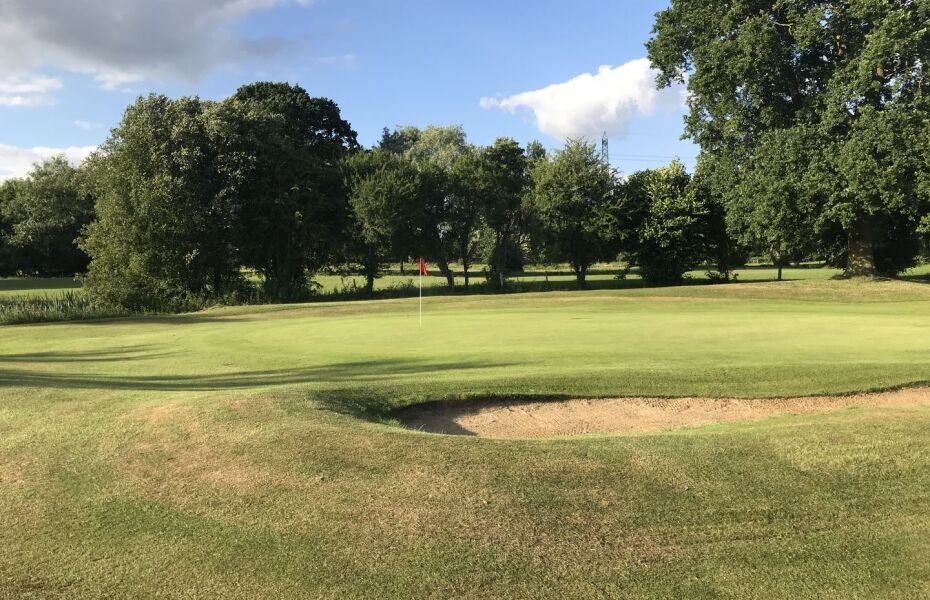 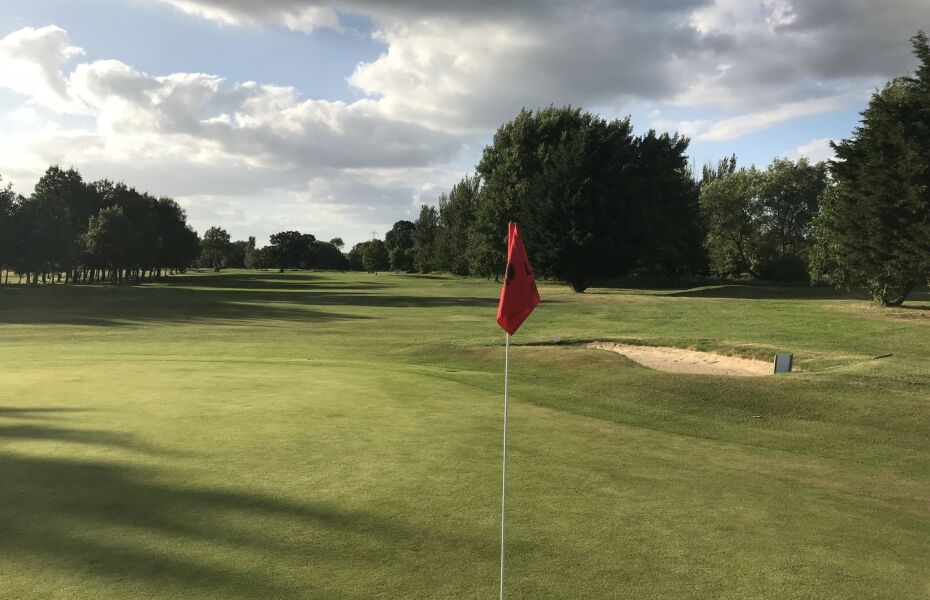 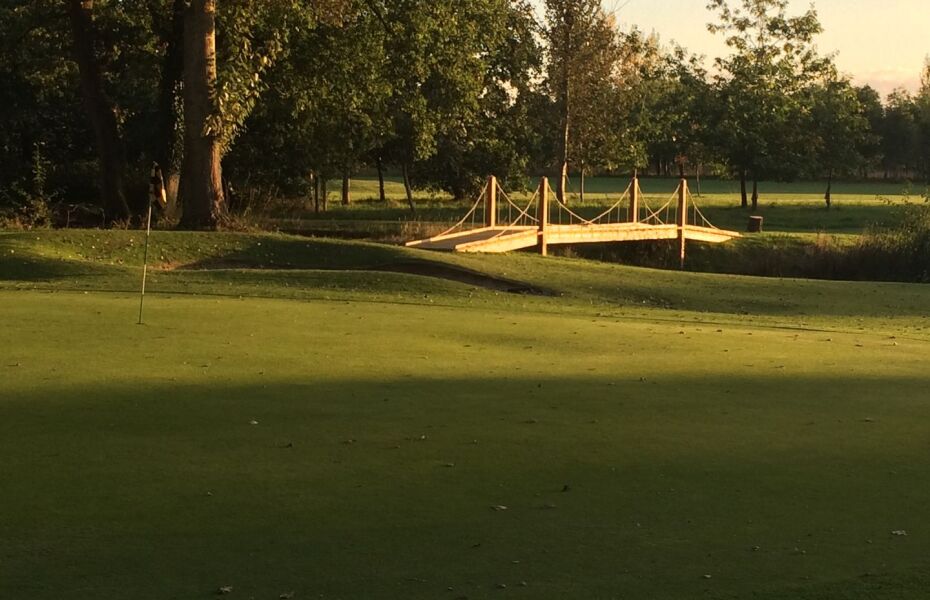 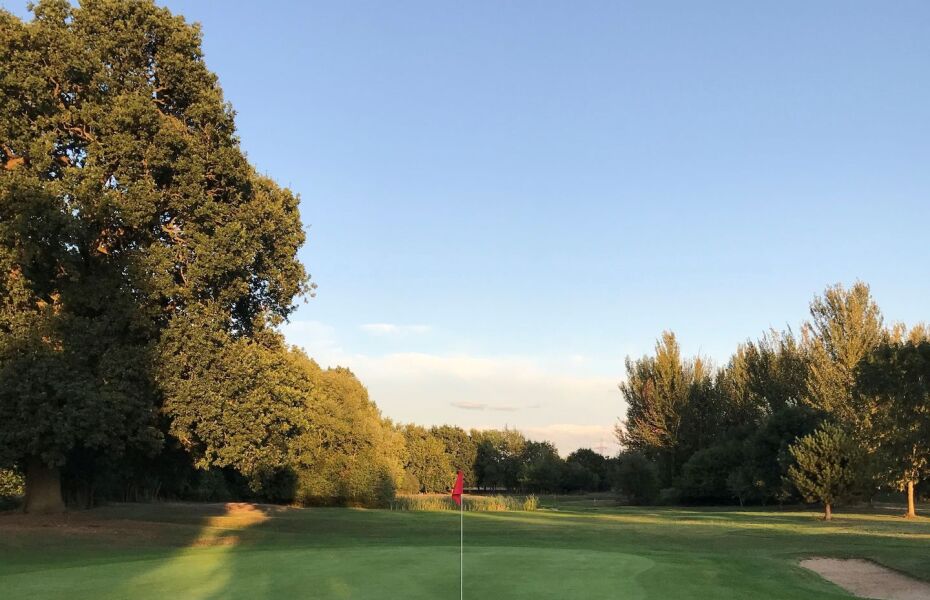 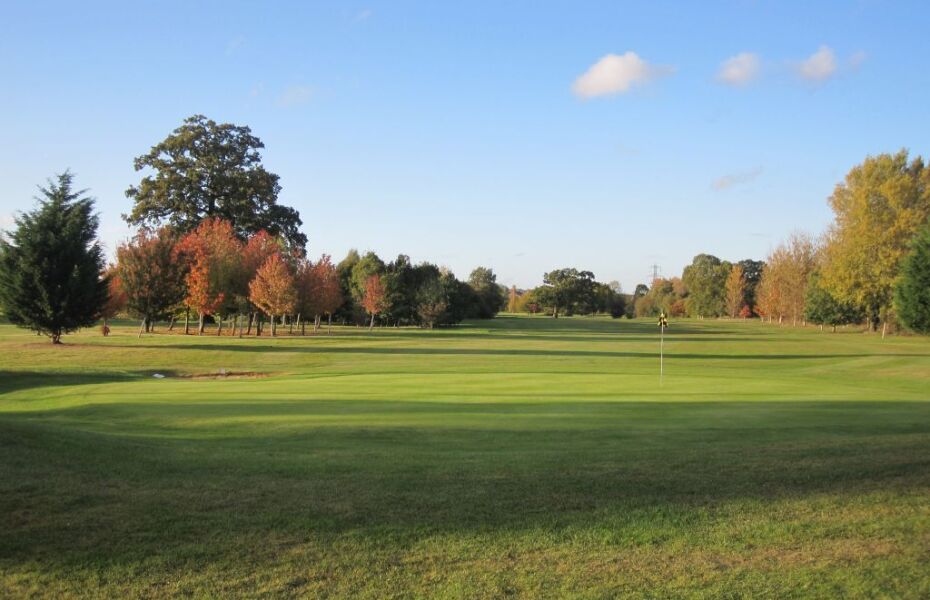 Fairway and green at Theale GC 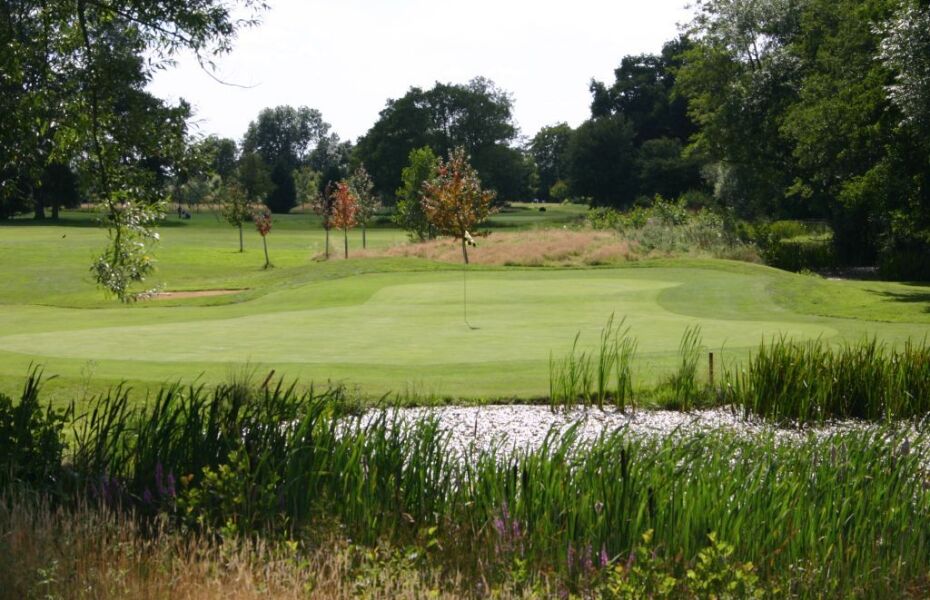 Green and water hazard at Theale 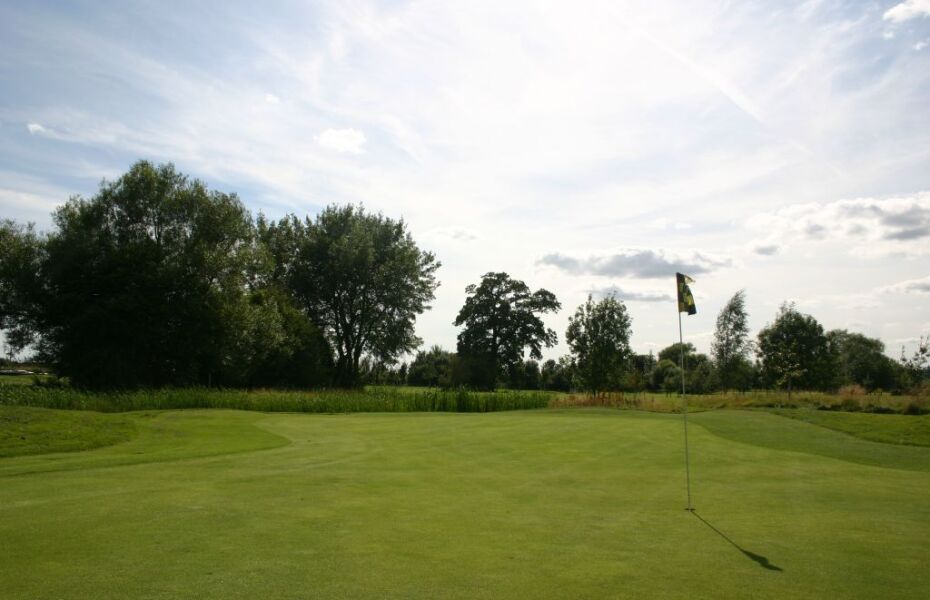 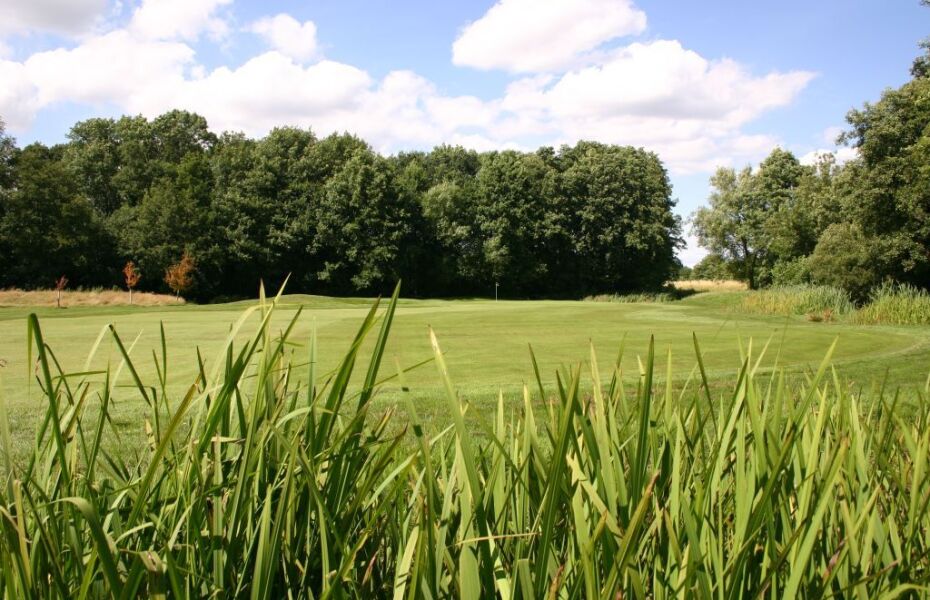 Theale is a parkland course 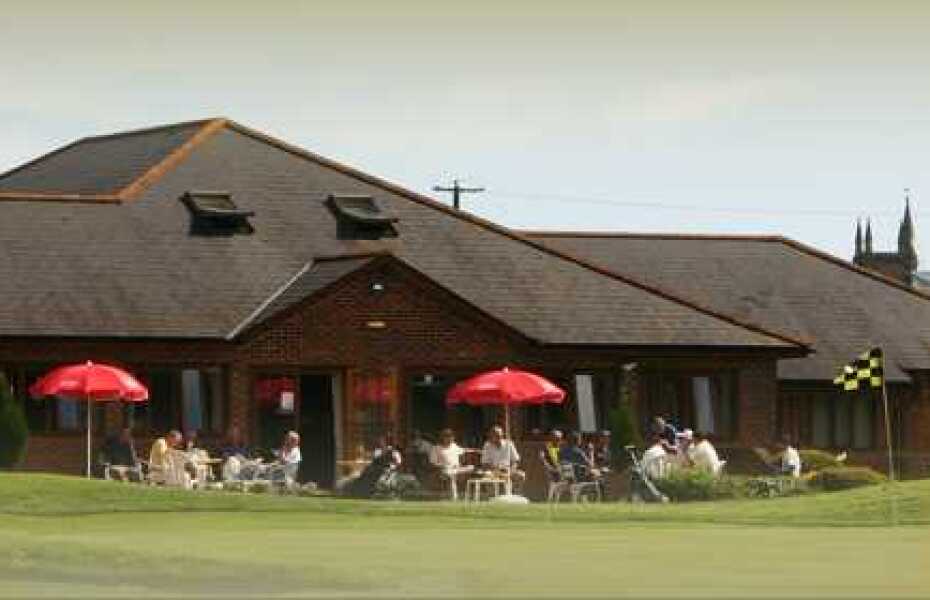