Lessons learned from my first round with an LPGA pro

SYLVANIA, Ohio — What sporting enthusiast wouldn't love to see how their skills compare to the world's best? It's easy to do in a timed sport like swimming. It's dangerous in MMA.

In golf, comparing our games with the pros might be the most fun, even if it's a bit humbling. At least there is swag.

I've played in a handful of Pro-ams over the years on the PGA Tour, European Tour and PGA Tour Champions, but had my first LPGA experience at the Highland Meadows Golf Club in Slyvania, Ohio for the Marathon LPGA Classic presented by DANA.

Highland Meadows is a historic, tree-lined Midwestern layout with small greens and narrow, gently doglegging fairways. As a 7-handicapper, that means feeble attempts to steer drives onto short grass while not making too many mistakes with the scoring clubs.

And lots of punch-outs.

Fortunately there wouldn't be too many punch-outs. The format for the Pro-am was a team "Shamble" (Everyone in the group tees off from the same place, selects the best drive, and then play their own ball into the hole from that location). Our pro was Ssu-Chia Cheng, from Chinese Taipei and now resides in San Diego. She was very pleasant company but clearly there with a task at hand. As she scribbled up notes with her caddie and putted to various pin locations on each green, I was helping myself to barbecue sandwiches and lagers at the hospitality tents. For Cheng, at 23 years old and ranked No. 268 in the world rankings and No. 104 in the CME, future playing opportunities on the LPGA are no guarantee.

There is a common notion that it can be more fruitful for amateur men to watch and learn from the LPGA or Champions Tour over the PGA Tour. The relatable part is the length of course (this was the first pro-am where we got to play the same tees as the pros). A well struck drive by us will be in the neighborhood of theirs.

After nine holes (our back nine was rained out, sadly) playing with Cheng, it was evident what parts of our games were a galaxy or two away from relatable.

Sure, I had a few flashes of brilliance on this afternoon; a birdie using my own ball tee to green on the opening hole (Boom!), a crafty sand save on a long par 3. On a long, 580-yard par 5, I connected perfectly on a drive with a high fade that found the narrow sliver of fairway.

But in between the highlights were all the sad shenanigans you'd expect from an am: A skulled PW on a par 3 over the green, a double-cross tee shot squirted dead left, worm-burners, mis-clubbing approach shots and more. The 3-wood I hit after that perfect drive sailed into the trees.

All these mistakes put me in a spot where double bogey would be more likely than a par.

Meanwhile, Cheng hit 6 of 7 fairways (the one she missed, she still had the only non-punch-out position so we took her drive and she made an easy par). She played a nice and tight high draw with her driver. Her approach shots were almost always pin high. After peeking in her bag, my fellow am Eric - a 2-handicap - remarked to me in disbelief that the worn spot on her irons were ever so tiny and dead center of the face.

Had a front row seat to the stripe show today, playing in the @MarathonLPGA pro-am with @ssu_chia .

(Highlight came on the 9th hole when, after her two shamble partners chunked their wedge shots, she stepped up and jarred it from 115. 🦅) pic.twitter.com/njlTd7QO0u

Last year after a particularly good round, I realized the difference between an average round and one significantly better than your index: Miss in the right spot, and then follow those misses immediately with a good shot back into position. When Cheng missed a green early she lipped out her chip shot for a gimme par. On her approach into a par 5, she hit a pretty average pitch to about 25-30 feet.

Birdie opp squandered? Not so fast. She rolled the putt right in.

Cheng's bag has 14 weapons. Mine is full of knock-off explosives. The signature example of the chasm between our ability came on our last hole together. From the fairway we had 115 yards in to an elevated green with a dramatic fall-off right. Myself and Eric both hit timid wedges a little heavy and didn't even make the green, one of our balls trickling down the falloff leaving a perilous pitch. Cheng stepped up and struck a perfect looking and sounding wedge of her own that never left the flagstick. We couldn't see it land but the hoots and screams from a few volunteers by the green said it all. Holed for eagle.

As I sucked on an Arby's milkshake on the drive home reflecting on the round, the path to elite golf seemed so simple: tighten up my shot dispersion, make solid contact with my irons and wedges every time (and pull the right club). Then throw in a couple brilliant shots and I'll be under par in no time at all. Easy game.

As I'm sure anyone does after they play a Pro-Am, the following day I checked the leaderboard of the Marathon Classic to see how Cheng did after Round 1. I was pleased to see she was T-3 after an opening day 66. Like other pros I've played with in Pro-Ams over the years, I'll carry with me a little twinkle of investment in her career with this idea that our paths crossing on a rainy Wednesday for a few holes somehow realigned her in the cosmos on a path to future success.

More likely, a rise up the world rankings will be the result of a dedication to her craft. For me, the afternoon was inspiration. It's awe-striking to see the game played so simply and in control. Witnessing the swing and sound of a hole-out up close is motivation to groove those wedges. 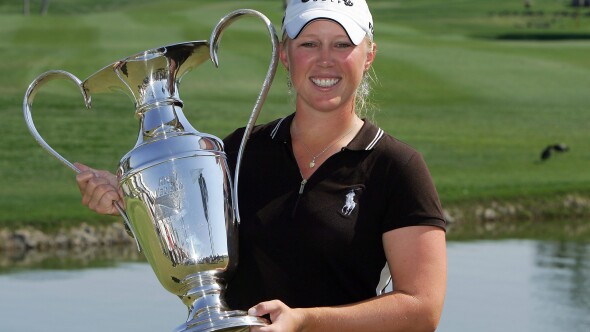 Lessons with a Champion Golfer: Morgan Pressel
An incredibly steady game and prodigious grit and determination have served Pressel well over her long career. In this series, Martin Hall picks Pressel’s brain about what has made her successful, and what everyday golfers can learn from her.