A $100-million renovation has revived and renamed The Oasis at Death Valley. Twenty-two new casitas are part of a massive renovation of the historic inn at The Oasis at Death Valley. Courtesy of Xanterra 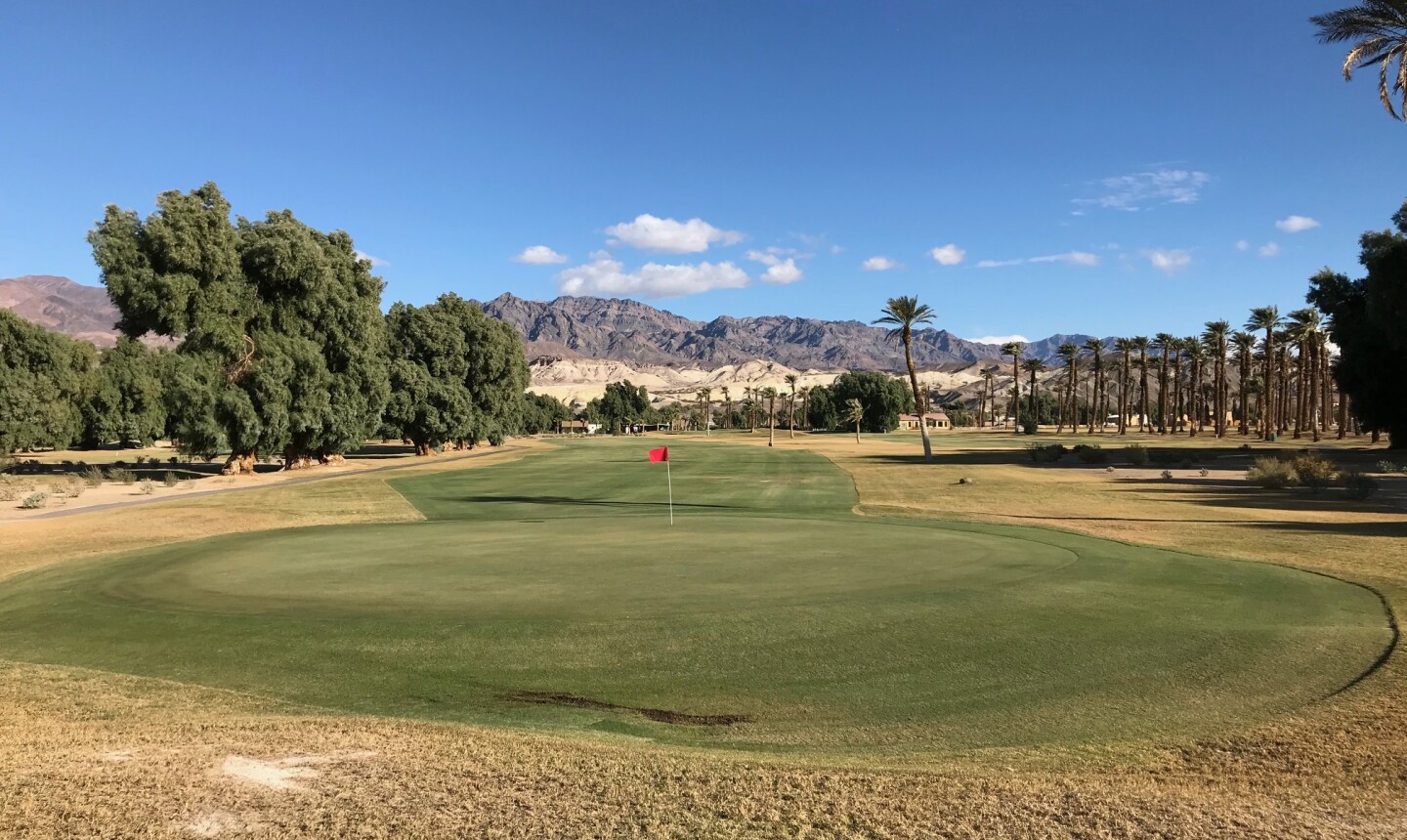 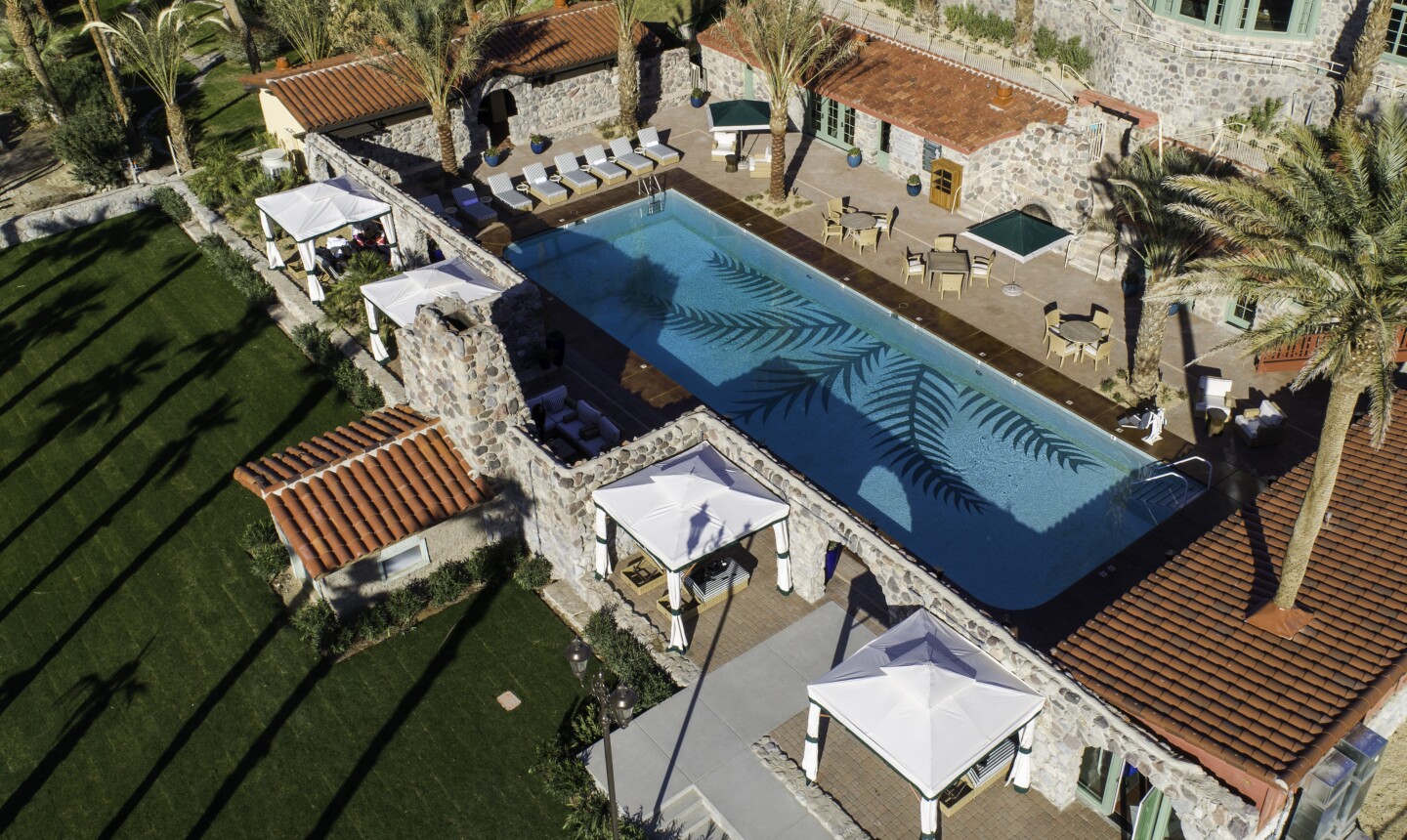 Both pools at The Oasis at Death Valley are spring fed. Courtesy of Xanterra 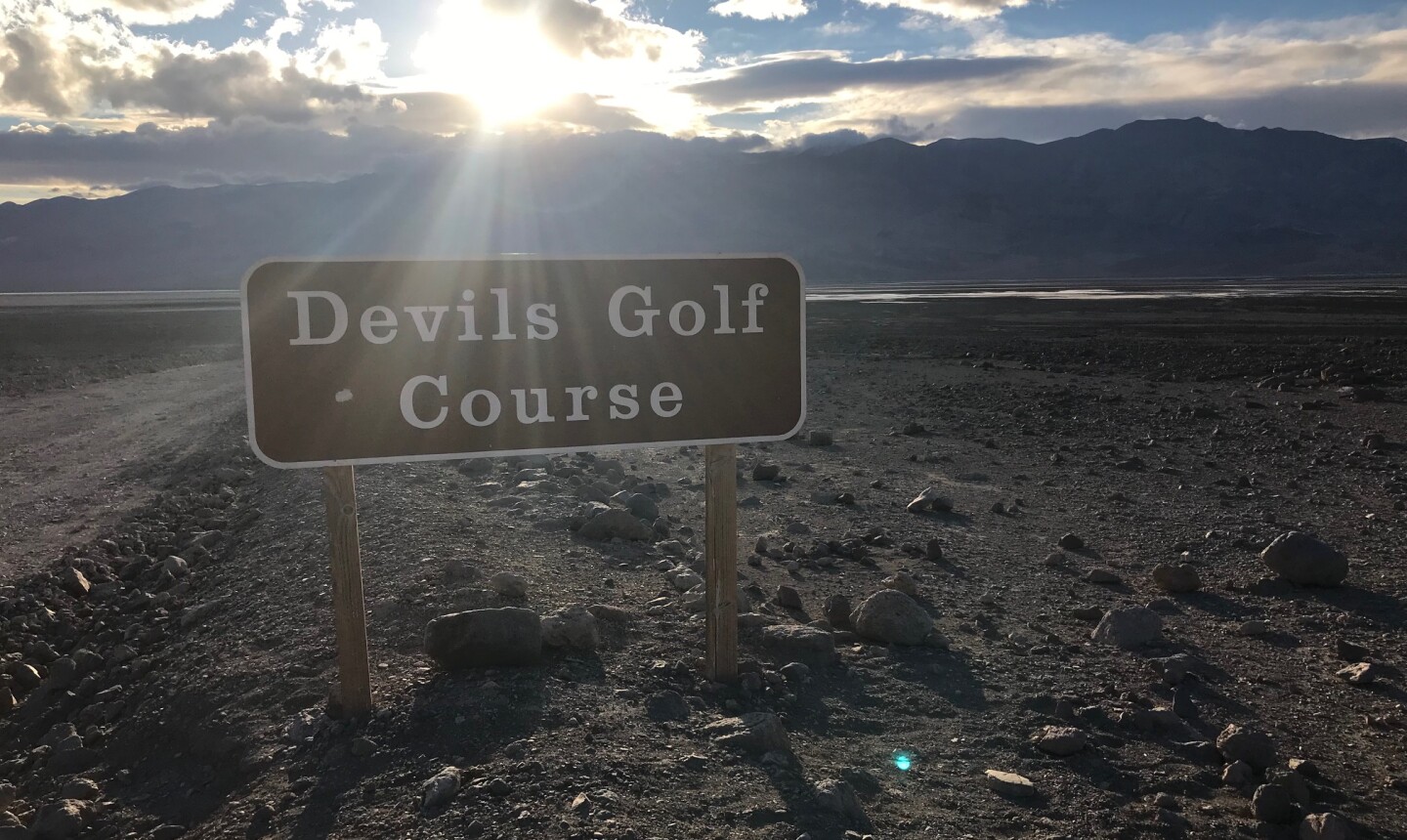 The Devils Golf Course is one of the many landmarks in Death Valley. Jason Scott Deegan/Golf Advisor

Kukreja, the executive director of operations at The Oasis at Death Valley, didn't mention the pond I would lose a couple of balls in or the greens I would eventually three-putt. Nor did he bring up the fact that, at 214 feet below sea level, the ball wouldn't fly as far as my normal shot.

"I'm a little worried about a sandstorm kicking up," he said.

Whoa, that's a new one. It was another not-so-subtle reminder that Mother Nature lives in the extremes in Death Valley, a beautiful but harsh desert landscape lost on the California and Nevada border somewhere between Las Vegas (southeast 120 miles) and Los Angeles (southwest 275 miles). The wind was wicked at times, but in no way did it derail a fun and interesting round in one of America's most remote golf destinations. The course was in fine shape, a sign of the ongoing rebirth of the former Furnace Creek Inn and Ranch Resort. Roughly $100 million has been spent to revive and rebrand this historic getaway, which dates to 1927.

The resort's new name, The Oasis at Death Valley, is more inviting and more appropriate given the drastic changes to the luxurious 66-room inn and the more family-friendly 224-room ranch adjacent to the golf course a short shuttle ride away. A vacation in Death Valley isn't for everybody. But for adventurers, dreamers and explorers, it's a special kind of escape.

The Oasis at Death Valley

A fascinating history oozes from The Oasis. The Pacific Coast Borax Company built the compound in the late 1920s after moving its mining operations elsewhere. Having invested millions on an infrastructure of roads and the railway, the company's executives built a 12-room inn aimed at generating tourism. Eventually, Furnace Creek became a Hollywood hot spot, attracting Clark Gable, Betty Davis, Goldie Hawn and countless other stars. Dozens of movies and westerns have been filmed in the desert, including Star Wars. In fact, U.S. President Ronald Reagan worked his final gig as an actor in 1964-65, hosting the long-running TV show called "Death Valley Days".

That SoCal celebrity love affair still lingers. I met NBA and UCLA legend Bill Walton at the grand reopening party in November. Walton calls Death Valley his happy place. When he needs a break from life on the road as an ESPN college basketball commentator, he retreats to the desert for 100-mile bike rides on empty roads and laps in the resort pool. He will sometimes stay two or three weeks at a time at The Oasis. It's easy to see why.

The rock-walled inn exudes a special charm. The four-diamond property sits on a hill surrounded by a lush landscaping of green grass, palm trees and bubbling streams, things you certainly won't see elsewhere in the national park. The expansive view of the valley floor stretches for miles to the Panamint Mountains in the distance. The lounge and lobby have all received extensive remodeling including new furnishings, a completely new bar and historic paintings. The rooms have been nicely updated, and you can thank owner Philip Anschutz's wife for demanding the bathrooms be significantly upgraded to meet the needs of modern luxury. Anschutz, a billionaire entrepreneur who owns stakes in the Los Angeles Lakers and Los Angeles Kings among other businesses, became involved with Furnace Creek in 2008 when he purchased Xanterra Parks & Resorts, which owns The Oasis and manages a number of other lodges in various national parks as part of its Xanterra Travel Collection.

Perhaps the most exciting change is the addition of 22 new casitas in the Oasis gardens. Each casita - with a bedroom, living room with sleeper sofa and wet bar - comes with a complimentary golf cart for guests to use to get around the property. Cars can't reach these rooms.

The tiled pool lies at the heart of the inn, naturally heated by the sun and the springs that feed it water. Furnace Creek used to close in the summer when scorching temperatures would scare away tourists, but plans are to keep The Oasis open year-round. Winter temperatures are mild in the 60s and 70s, ideal for snowbirds from the Midwest and East Coast. To relax on arrival day, I spent the afternoon getting a massage in the spa, home to two treatment rooms near the pool. Later that evening, guests gathered for an outdoor concert under the stars at the Mission Gardens, a wedding venue and outdoor meeting space that at one time was simply the resort laundry mat. Dinner was served back at the refurbished Inn Dining Room, warmed by fireplaces, good food and a friendly staff.

The Ranch complex we explored the next day felt more like a small Western outpost you see in the movies. There's a "town square", general store, the National Park Visitor Center, a gas station, U.S. Post Office and lots of entertainment for families: A spring-fed pool that is consistently 87 degrees; golf; communal fire pits; tennis, basketball, and volleyball courts; horseshoe pits and a playground. You can ride horses or take a carriage ride out of the Furnace Creek Stables or rent a Jeep to explore the park. The Fiddler's Creek campground is available for RVs. The Last Kind Words Saloon at the Ranch held another grand reopening party that evening. Square dancing followed more live music. It's probably one of the crown jewels of the renovation. The decor of "Wanted!" fliers and vintage movie posters brings the old West back to life.

The Furnace Creek Golf Course has a proud history of its own. Debuting nine holes in 1933, it was the first all-grass course in the California desert, maybe even the inspiration behind the explosive growth of golf in the nearby Coachella Valley. Old photos show sheep grazing its fairways to keep them trim and tight.

This history puts The Oasis and its Furnace Creek course proudly among the most historic golf resorts in America, along with titans like Pebble Beach, The Greenbrier, French Lick, Sea Island, Pinehurst and The Broadmoor, a sister property in Colorado. Its presentation compared to such illustrious company is, well, subdued to say the least. I was told I would shoot the lowest round of my life by several resort employees, probably because the par-70 routing is as straightforward as they come. There's little to no elevation change. Only a handful of bunkers guard the fairways and greens. And the one pond is really only in play on two, maybe three, holes at most. If you're crooked off the tee, towering palm and tamarisk trees lining the fairways tend to be the most formidable hazard. More than 15 acres of turf has been removed during a recent renovation to conserve water.

Its location is the biggest challenge. I'd estimate that its 6,215 yards plays more like 6,700 yards. Maybe when the temperature soars past 90 degrees in summer will you gain back some of the distance lost from the sunken elevation. Wind can be a constant playing partner, too. At one point, a coyote played through our fairway, although it didn't snatch any balls, which has been known to happen.

The pro shop is small but homey. Even resort guests who don't play love to visit the revamped open-air 19th hole for a burger and a beer. Overall, the vibe is more laid-back than your local muni without the hordes of golfers vying for a tee time. For that, it gets bonus points in my book.

The story goes that Death Valley got its name in the winter of 1850 when a group of lost gold-seeking pioneers climbed the Panamint mountains, barely escaping with their lives. One of the men looked back, simply saying "Goodbye, Death Valley."

"Hello" is the more appropriate word today. Death Valley has never been more welcoming to travelers. Proclaimed a national monument in 1933, Death Valley eventually became a national park in 1994. Executives of the Borax company laid much of the groundwork for the landmarks visitors enjoy.

One afternoon, I explored the surrounding sites with a friend by car, visiting the Devil's Golf Course, a large salt pan on the desert floor, and the Artist's Drive, a five-mile loop with an unforgettable stop at the Artist Palette, a colorful display of rocks in the canyon. We caught the sunrise at Zabriskie Point the next morning. As day broke, the canyon walls transformed from brown to vibrant orange and pink. It was a brisk 45 degrees, almost 100 degrees cooler than the day that made Death Valley famous. It was July 10, 1913, when Death Valley hit 134 degrees - the hottest air temperature ever recorded on Earth.

Thankfully, the course and resort weren't open at that time. Those poor golfers would have wilted. Imagine the pool party, though!

If you would have done just a little research you would find that DV does not get it water from the Colorado River. Until you go to DV you will never understand what it is all about. Last time I went in the spring there was a tournament going on so I could not go golfing but I plan on going back soon! Not just for the golf but the whole experience of DV. From -282 to 11,000 feet.

Seems to me that Golf Advisor should not be advocating golf courses which require a lot of water in an area that receives very little rain and can only receive it thru irrigation and utilizing already stretched natural resources of the Colorado and other sources. The west coastal cities and vineyards already are experiencing major water shortages.

DJ...I used to work there and both pools (at Inn and Ranch) are spring-fed pools, so the water is changed frequently and the pool water goes to watering the golf course and landscaping!