Opening the No. 7 par-3 course and several key renovations improves life on the mountain at this exclusive Arizona community and club.

SCOTTSDALE, Arizona - Private clubs are notoriously adverse to change. Club traditions rule every decision, sometimes to the detriment of progress.

Not at the Desert Mountain Club, long known for its six Jack Nicklaus courses. One of the nation's largest private clubs is proving to be one of the country's most forward-thinking. In the past year or so, Desert Mountain, the private 8,000-acre golf, recreation and real estate community, has debuted a series of monumental innovations and upgrades that have the club well positioned for future growth.

* No. 7 - appropriately named as the seventh course in the community - debuted earlier this year. The pairing of this new 18-hole par-3 course with a modern clubhouse and a wildly popular bocce ball facility has created a community hub where members gather.
* Renegade, a ground-breaking course built by Nicklaus in the 1980s, has reopened after being modernized and improved.
* Turf upgrades have created year-round playing conditions, something nearly impossible to achieve elsewhere in the Valley of the Sun. At 4,500 feet in elevation, Desert Mountain now has a mix of grasses on its courses. In essence, when one type of grass is struggling to grow or to be maintained, the other is thriving. Renegade and No. 7 are both bentgrass. Ryegrass blankets Chiricahua and Apache. Cochise and Geronimo feature Bermudagrass that is overseeded with rye in the fall. Bermuda also covers Outlaw but isn't overseeded, leaving the dormant grass firm and fast in winter. There's always somewhere pristine to play.

Spending two days "inside the gates" at Desert Mountain, dining, playing golf and touring the impressive array of amenities and facilities felt like an escape into a fantasy land. It was hard to fathom that this is how some lucky folks live. One member I met called joining the "best bargain in golf," having access to so many different courses (seven), clubhouses (six) and restaurants (eight). Sometimes, bigger is better.

The Club and Community 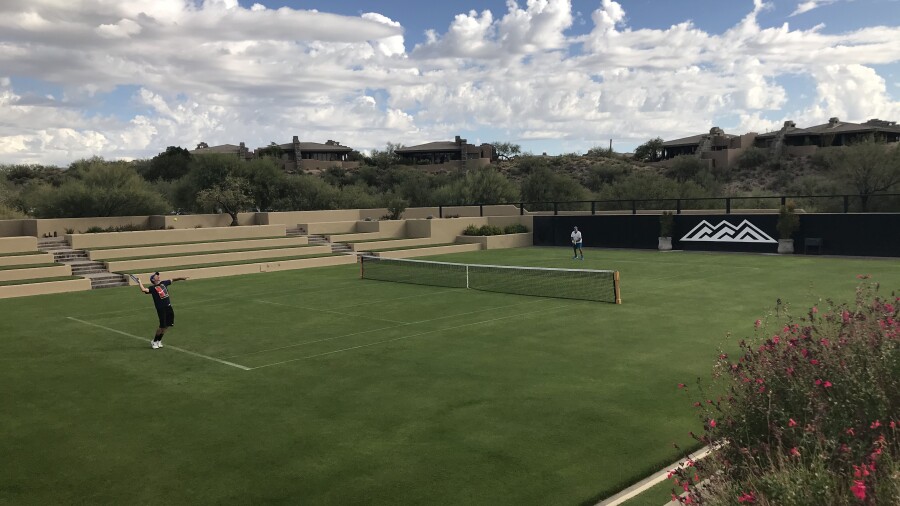 The stadium court at the Desert Mountain Club is all grass. Jason Scott Deegan/Golf Advisor 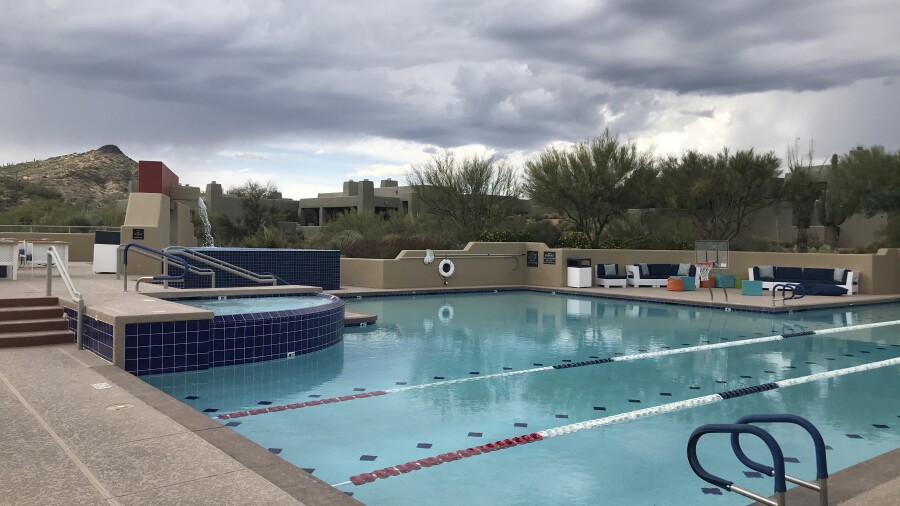 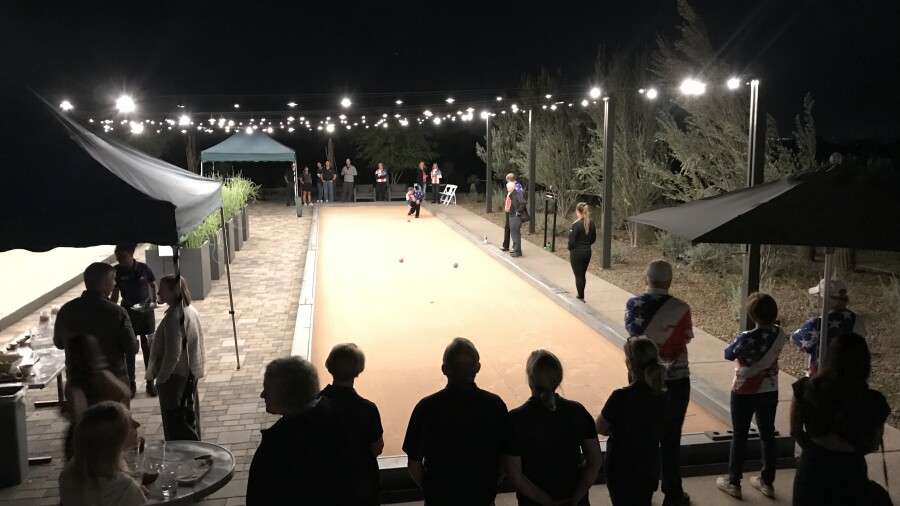 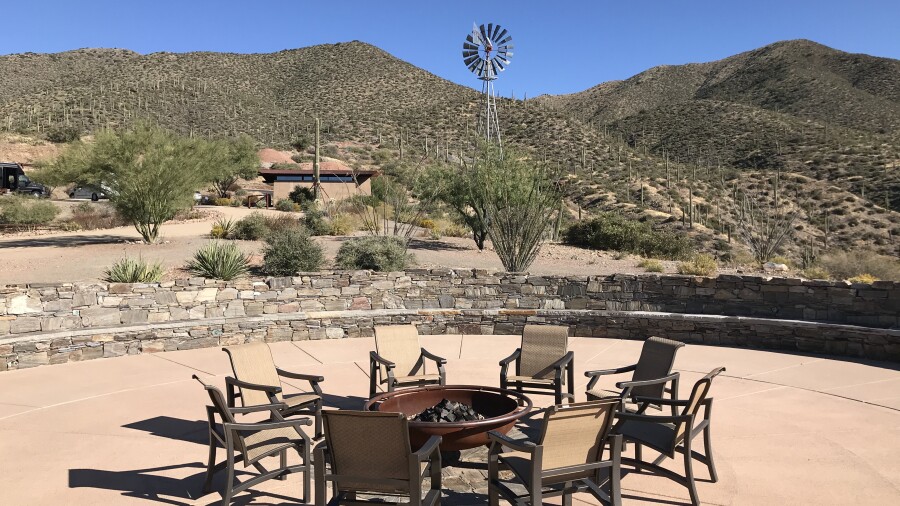 The Ranch, the home base for adventurous outdoor activities, is located high up on the mountain at the Desert Mountain Club. Jason Scott Deegan/Golf Advisor

Entering the fourth quarter of 2019, a record number of homes were under construction within Desert Mountain, while resales have been robust. A couple under the age of 50 recently bought a 7,600-square-foot home for $9.3 million, a record in the community. Through October, Desert Mountain had surpassed the all-time record in annual custom home sales at nearly $200 million. The club membership is trending younger with nearly 90 new members in 2019.

The most impressive part of Desert Mountain is something no man can build. Mother Nature's handiwork is evident throughout the community. The higher you drive on the mountain, the bigger the boulders and cactus, it seems. The Ranch is located in this rarified air, offering adventures of all kinds - horseback riding, yoga in the Kiva (a ceremonial building used by indigenous cultures), glamping in canvas tents and hiking on trails maintained by a die-hard group of members called the "Desperados."

Later, we spent time at the Sonoran Clubhouse, the wellness and health center better than any gym you'll ever join ... stocked with outdoor tennis courts, outdoor pickleball courts, studios for yoga and spinning, an outdoor lap pool and family pool, tons of workout equipment, Cafe Verde and a spa. All the staff are club employees, meaning they have a vested interest in your workouts, whether it's teaching tennis or personal training. The main tennis court (of nine) is an all-grass stadium court.

After a healthy lunch at Cafe Verde, I spent an afternoon relaxing at the spa. A lot of spas treat men like second-class citizens, but not here. Everything was perfect, from the masseuse to the post-treatment soak in the hot tub.

As for dining, the culinary program on the mountain is world class. Eating at the Chef's Table at Constantino's was a special experience in a private room within the kitchen at Chiricahua, the jewel of all the clubhouses. The most fun menu is found at Seven, the newest clubhouse. After downing a milkshake spiked with alcohol, I almost signed my membership papers right there. You don't have to live in the community to be one of the 1,900-plus golf members.

Seven golf courses to choose from at Desert Mountain 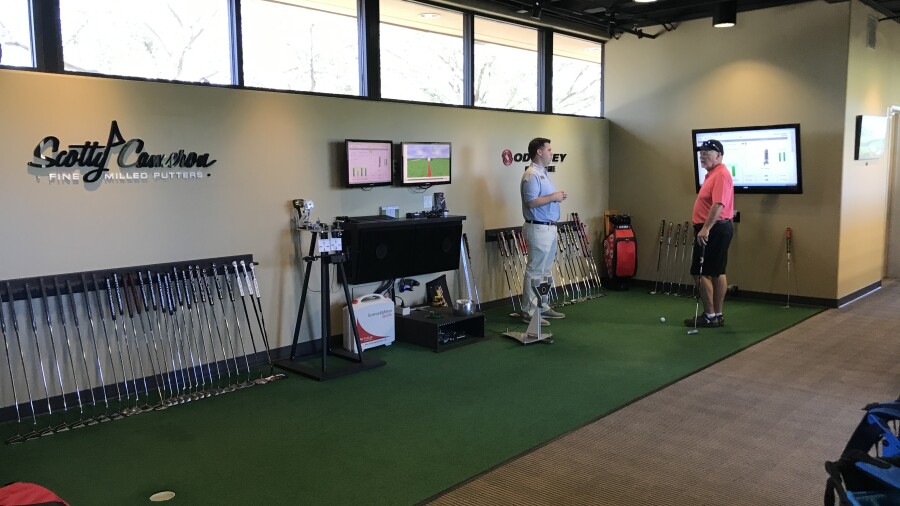 A golfer works on his putting with an instructor at the Flick Golf Performance Center at the Desert Mountain Club. Jason Scott Deegan/Golf Advisor 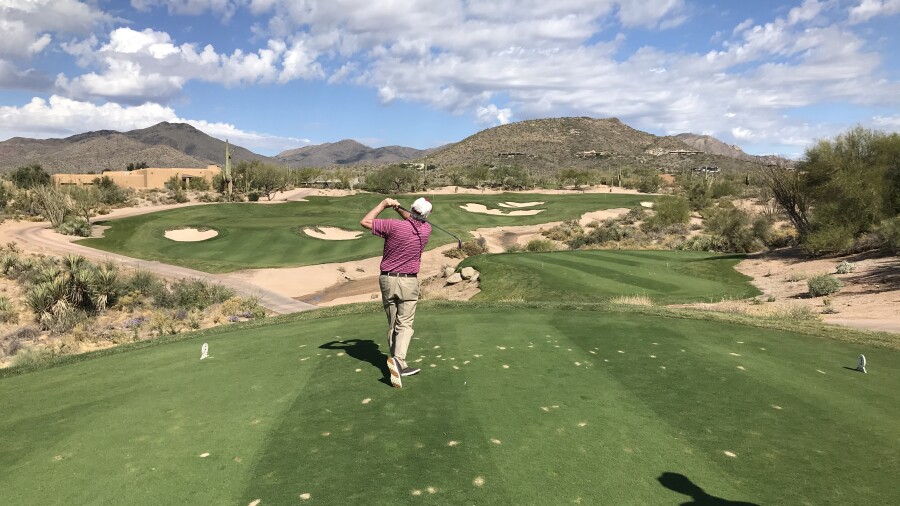 Hole 14 on Renegade at the Desert Mountain Club might be the only hole in golf with three greens. Jason Scott Deegan/Golf Advisor 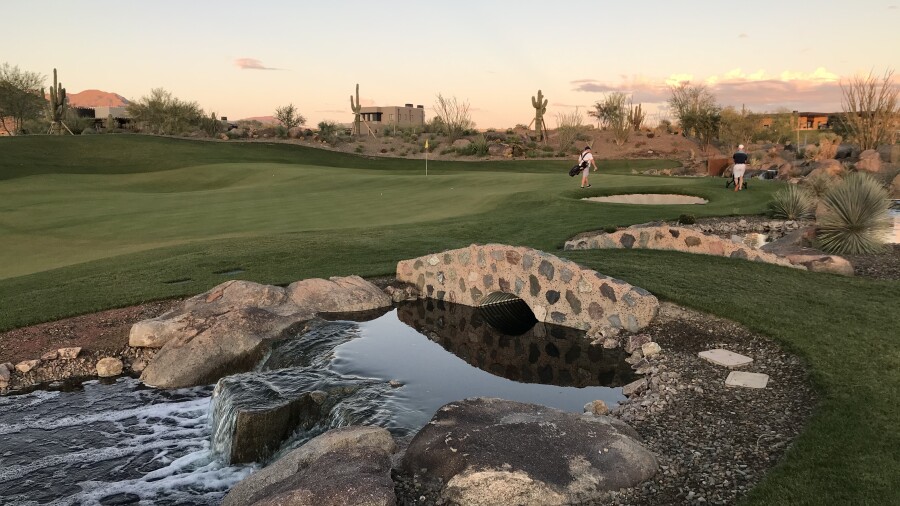 A water feature is a prominent part of No. 7, the new par-3 course at the Desert Mountain Club. Jason Scott Deegan/Golf Advisor

A quick chipping and putting lesson at the Flick Performance Golf Center dialed in my short game for the upcoming challenges on the course. The 6,500-square-foot operation can help golfers fix all parts of their swing and putting and get custom-fit for new equipment. A Science and Motion Balance Lab determines how the body's limitations impact the swing. It is heaven for golf tinkerers.

Designed by Wendell Pickett and Bill Brownlee, No. 7 is only the second 18-hole, par-3 course in the nation that allows golfers to post scores for their handicap index. The front nine eases everybody into their round, especially beginners and juniors. On the back, the layout amps up the energy with a few longer, tougher holes. I love that rounds are fast and you actually have a chance to shoot golf's magic number. I would have shot 58 or 59 if not for a bad break (hitting a rock and bouncing O.B.) on the final hole of the day.

Should more clubs go all-in on elaborate short courses to grow the game? Probably so, if they want to attract more families and casual golfers as members.

Playing Renegade was both stimulating and confusing at times. When it opened in 1987, it was considered a revolutionary design. Each hole offered two pin placements – a white pin usually set forward on the green for easier access and a gold pin in a more difficult spot on the same double green or a different green altogether. The gold pins often proved to be too difficult and most rounds ended at the white flags.

The redesign by Nicklaus this year softened everything. Mounds were removed. Greens were separated for a cleaner look. I still played to the wrong flag once, but that was after my group decided to change tees and pins on the back nine. Between the six tee boxes and two flags, members have hundreds of course combinations to play from, offering the opportunity for a new look and feel almost every round. That flexibility is a huge bonus.

Having played three of Desert Mountain's courses, I'd like to consider myself as a club expert. The truth is I've only tasted an appetizer of life on the mountain. Considering that Golf Digest has named Chiricahua as Desert Mountain's best course and that two golfers I trust called Outlaw their favorite, I've still got a lot to experience. Members and residents are fortunate. There's always a new adventure to tee up, on or off the course.

Check out these Desert Mountain videos