Winged Foot, host of the 2020 U.S. Open, is considered his finest work. But where are Tilly's best public courses?

Shackelford: The life and legacy of A.W. Tillinghast

A.W. Tillinghast was one of the most prominent golf course architects of the United States' Golden Age of golf course design. "Tilly" is credited for having worked on at least 265 golf courses. Some were his original, while he consulted on or upgraded many others.

Today, many of his designs are part of elite private facilities, particularly on the east coast. The 36 holes at Winged Foot near New York City, a popular U.S. Open host, are regarded by many as his finest work. But he designed plenty of other exclusive private clubs across the U.S. as well. 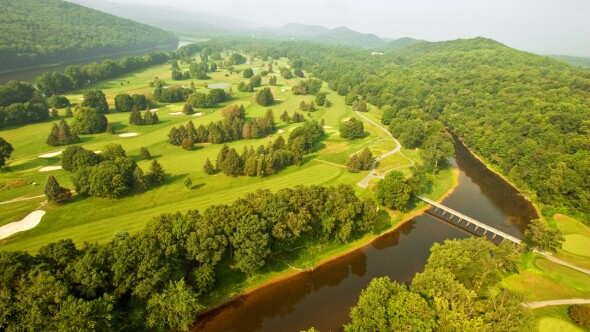 A.W. Tillinghast, golf course architect
Tillinghast was one of the most prolific course designers in the game's history. Learn more about the Golden Age architect and browse his total portfolio of courses.

There are some notable Tillinghast golf courses open to the public, none better known than Bethpage Black, one of five 18-hole courses at the Long Island state park. Bethpage was built for the public golfer from the start, but many of his accessible designs are formerly private and have since gone public or semi-private. Many are actually now quite affordable, often a result of their walkability and smaller footprint (many just 6,200 yards or so). Some are located at resorts as well.

One of the latest Tillinghast courses to begin offering public access can be found in Ohio: Avalon Field Club, formerly Newcastle Country Club. Public green fees are $100 walking. It has received just one review in 2020 and it is very positive:

Terrific AW Tillinghast course that is no longer completely private and allows some public play. Course has a tremendous layout that takes full advantage of the rolling terrain and creek that runs through the property. The fifth hole has to be seen to believe. Course is well worth your time and effort to play.

In our database of more than 1 million reviews, we have over 1,800 reviews of Tillinghast-designed golf courses. These include designs he co-designed or have since been renovated or redesigned. Most reviews are of his public, semi-private and resort courses, though a fortunate few have reviewed such prestigious courses as Winged Foot and Philadelphia Cricket Club.

With the 2020 U.S. Open returning to Winged Foot West we thought we'd revisit which of his designs have fared best according to your reviews. If your favorite Tillinghast work isn't listed below, be sure to write a review here.

Editor's Note. One of the courses that was in this Top 10 when it was originally posted in 2016 has since closed, Grossingers Country Club. Virginia's Belmont Golf Course is also undergoing an extensive reconfiguration via recent investment by The First Tee.

Brandon Tucker
Brandon Tucker is the Sr. Managing Editor for GolfPass and was the founding editor of Golf Advisor in 2014, he was the managing editor for Golf Channel Digital's Courses & Travel. To date, his golf travels have taken him to over two dozen countries and nearly 600 golf courses worldwide. While he's played some of the most prestigious courses in the world, Tucker's favorite way to play the game is on a great muni in under three hours. Follow Brandon on Twitter at @BrandonTucker and on Instagram at @btuck34.
6 Comments

Growing up in northeast Jersey on the golf team in HS I played numerous Tilly’s including our team Home course Forest Hill Field Club. Got to play Montclair CC and Upper Montclair and the stunning Alpine CC among others. Of course at 17 years old I didn’t realize how lucky I was to have the privilege. It wasn’t until a few years ago I got to play a rather unknown Tilly the Hempstead Country Club that it dawned on me how all Tillinghast courses have common features. The “false front”, and also the sucker front bunker that are really 10 yards in front of the greens but optically designed to fool your eyes to believe they are set against the green and not 10 yards away. The greens are always fair but force you to play strategic approaches. If you play Ross tracks and Tilly’s or are truly lucky enough to find a McKenzie or a MacDonald consider yourself one fortunate soul. Today’s modern tracks are beautiful but to be honest they are designed in ways to aid speed of play or other owner demands. Pretty cool isn’t it that only a few guys got under par at WF?

It's a good thing amateur golfers don't have to play the Black Course in front of spectators. When I saw the PGA Championship there last May with my son, a couple of New York fans (99.9 percent were very well behaved) yelled vile things about Dustin Johnson's wife, and also about Francesco Molinari's heritage. Uh, not really necessary. You don't hear this stuff on TV, and frankly it should be embarrassing for the tournament. I didn't see these guys getting thrown out.

I've never played the Black (don't want to sleep in my car) but I enjoyed the Red greatly back in 1999. I saw it as quite tough, but fair and always engaging. Holes one and eighteen, I remember distinctly, were fantastically challenging. Long four-pars abounded. It was first-rate golf and showed Tillinghast's mastery.

I've played Manchester Country Club, near me, many times. It's not the test that the Red or Black at Bethpage are, but again it demonstrates Tillinghast's philosophy, bunkering style and design virtues quite well. Well worth a visit for any serious golfer.

Belmont golf course? You must be kidding me. Poor shape most of the time, layout on the front is cramped to say the least. By far Tilly's WORST design - there are a number of public tracks in Richmond that are better, much better.

Belmont was the site of Hermitage CC before they moved out to Goochland. The PGA Championship was played at Belmont in 1949 with Snead defeating Palmer in what was then a match play championship. Good to hear that Belmont is getting a major make over through the First Tee program - - - thanks Tiger.

Add Rock Hill Country Club in South Carolina to his worst designs. It may have been good in 1934, but greens have settled into bizarre mounds and course lacks personality and conditioning. There are 5 better PUBLIC courses within 25 minutes.

Thanks for the information re the Tillinghast courses you can play. Was disheartened to read about the fairway and bunker revisions at the Black. By the way I am a Tillinghast.