Cooperstown (baseball), Saratoga Springs (horse racing) and Lake Placid (Winter Olympics) are known for other sports, but they're great golf destinations, too.

COOPERSTOWN, N.Y. - I came for the hall and fell hard for the other white ball.

Growing up, baseball was my game. I was a little league all-star (in a very small town) and collected thousands of baseball cards, which now sit in boxes in my attic. I still have the front page of the Detroit Free Press when the Tigers last won the World Series in 1984. Golf entered my universe in college, eventually overtaking baseball as my favorite pastime. However, as soon as my son picked up a glove and a bat, he reignited the fire.

Last fall, I built an entire golf vacation in upstate New York around visiting the National Baseball Hall of Fame. My two favorite worlds collided in the most spectacular fashion. I lucked out with ideal fall weather, mid-70s, no rain. The leaves had just started changing.

Cooperstown was the highlight - as expected - but there were so many great surprises along the journey. The trip actually became a hall of fame tour of classic golf architecture, playing courses with ties to Dr. Alister MacKenzie, Donald Ross, Seymour Dunn and Devereux Emmet. I'd ride with that foursome anytime.

Day 1: The magic of Cooperstown

Gone, thankfully, were the throngs of baseball fans and families of little leaguers that invade in the summer. It almost felt like I had this little slice of Americana to myself. The drawback was many of the baseball souvenir stores and card shops along the quaint main street were closed during the week in late September. The good news was I could roam the hall of fame and look for memories of my favorite Tigers without interruption. My spine tingled seeing Kirk Gibson's famous one-legged blast on a highlight reel of memorable moments, one of the many interactive displays. I was 16 when it really happened, the most influential of ages.

Cooperstown and Baseball's Hall of Fame

The best advice I got was to watch the movie in the new Grandstand Theater (opened in 2018) before touring the hall. The movie 'Generations of the Game' sets the stage for appreciating baseball's history and all its great players and feats. It's emotional and inspiring, almost to the point where I had tears in my eyes.

The hall is open year round except Thanksgiving, Christmas and New Year's Day. Ticket prices are reasonable: $23 for adults, $15 for seniors (over 65) and $12 for children (under age 12). Even for a casual fan, it's every bit the bucket list as Pebble Beach and St. Andrews are for golfers.

As much as I cherished feeling like a kid again at the hall, the attractions down the road, the lakeside Leatherstocking Golf Course and Otesaga Resort Hotel, brought back the reality that the pampering necessary to survive adulthood isn't so bad. Yard for yard, Leatherstocking (6,401 yards) might be the most memorable course in America. It's a thrill ride of hills and views of Lake Otsego. There's so much character and quirks. The final tee, an island in the middle of the lake, plays to an epic par-5 finisher on the water. Every year, a charity golf outing welcomes back baseball's legends to celebrate the newest inductees.

I stayed at the Cooper Inn, a charming 15-room inn halfway between the course and downtown, so I could easily walk to both.

Day 2: Horsin' around in Saratoga Springs

Did you know there's another hall of fame 75 miles north in Saratoga Springs?

I'm not much of a horse racing fan, so The National Museum of Racing and Hall of Fame didn't make my itinerary, but it could yours. I'd much prefer spending my time horsing around during a tee time.

What a contrast in experiences at Saratoga National and Saratoga Spa: Both special in their own way. Saratoga Spa is just a small part of an impressive state park. It's a classic, no-frills test accepting of all handicaps and budgets. It's one of several fine courses that are a part of the New York Golf Trail, which I highly recommend for setting up packages.

Saratoga National, designed by Roger Rulewich in 2001, counter punches as the best "country club for a day" maybe in all of New York. The clubhouse was built for lavish parties, banquets and weddings with a large patio overlooking the 18th hole. The tough layout isn't my cup of tea, a smorgasbord of target golf and intimidating shots over wetlands and scraggly bunkers. However, the perfect conditions and staff friendly make it a must-play, for sure.

Weary after 36 holes, I drove the 25 miles north to Lake George, crashing at the Fort William Henry Hotel and Conference Center, which sports a beautiful location overlooking the water.

With a boat instead of a rental car, I'd have cruised the 10 miles by water to the iconic Sagamore Resort, located on a 70-acre island on the lake's western shores. The 137-room resort, dating to the 1880s, oozes class. There's fine dining, a spa and an outdoor pool right on the lake.

Reflections: The #Sagamore - set on an island in #LakeGeorge - is one cool hang in upstate NY. Its elevated first tee is legendary.

This family vacation and corporate retreat heaven in Bolton Landing, N.Y., also happens to have a world-class Ross course on the mainland. The elevated first tee at the Sagamore provides a stirring start. Hilly terrain and tricky greens will torture your scorecard, but the wooded, serene setting will return the favor by lowering your blood pressure. I'd love to return for a week-long stay in summer to enjoy the water and the golf.

Baseball, horseracing and .... hockey? The golf trail I was blazing was turning into a sports enthusiast's dream.

The 75-mile drive from the Sagamore into the Adirondaks was beautiful. Like many sports fans, I'd seen highlights of 'The Miracle on Ice'. Unfortunately, I knew very little about the rest of the 1980 Winter Olympics held at Lake Placid. I should have stopped for a selfie inside the Herb Brooks Arena at the Olympic Center and toured the museum, but my days were too packed with golf ... 72 holes in 48 hours. Not a terrible problem to have.

The Whiteface Club & Resort is a community with all the amenities of a resort - vacation rentals, tennis courts, the Moose Lodge Boathouse Restaurant on the water and a fun, interesting 6,451-yard course. Again, this is more throwback golf with a routing that dates to 1898. Long-time pro J. Peter Martin, a local legend, shared during the round that the course was in as good a condition as he'd ever seen it.

Lunch on the Cafe on the Green near the finishing hole sent me off in search of the Saranac Inn Golf Club in nearby Saranac Lake. The main inn burned down in 1978, although a quaint 10-room motel adjacent to the clubhouse does allow stay and plays for small groups. False fronts and tiers haunt the greens of this Dunn design circa 1901. They're touted as the best conditioned and fastest greens in the area, so hold on tight.

After golf, I stayed at the Crown Plaza Lake Placid perched on a hill overlooking town and Mirror Lake. I soaked in the indoor hot tub to recharge my golf muscles before dining on the patio of the Great Room restaurant. Even with a chill in the air, guests gathered around the outdoor fire pit for drinks after dark. It was a nice, relaxed vibe.

The two courses of the Lake Placid Club are almost run like two different facilities. The Links course, located across the street well below the hilltop clubhouse, is where most of the members play. They can just park their cars near the first tee and go. It's regarded as the "better" of the two courses, but "better" doesn't always equate to more enjoyable. The coolest features are the "Dunns" named after the designer. These little mounds of fescue sometimes pop up unexpectedly in fairways or near greens to snatch your ball. Famous visitors like Nancy Lopez and Michael Phelps are commemorated with plaques near individual tees. 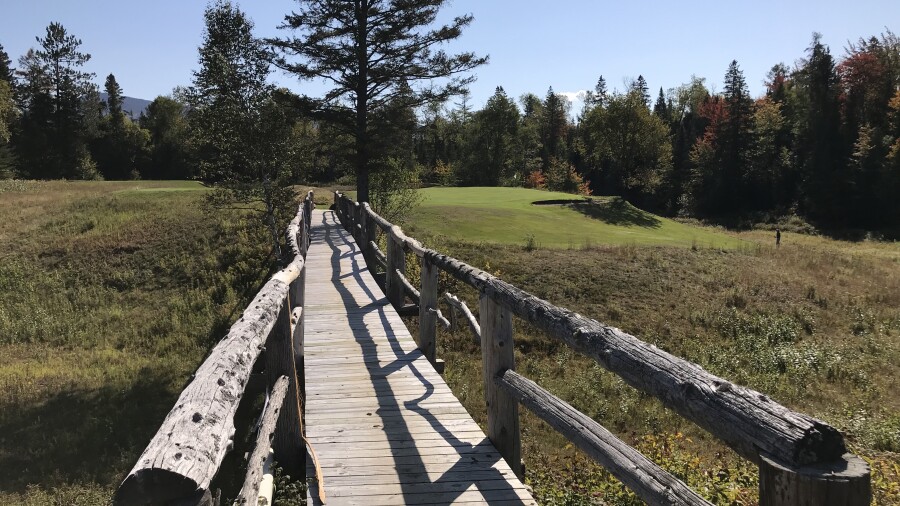 A walking bridge leads to the green at the par-3 14th on The Lake Placid Club's Links course. Jason Scott Deegan/GolfPass 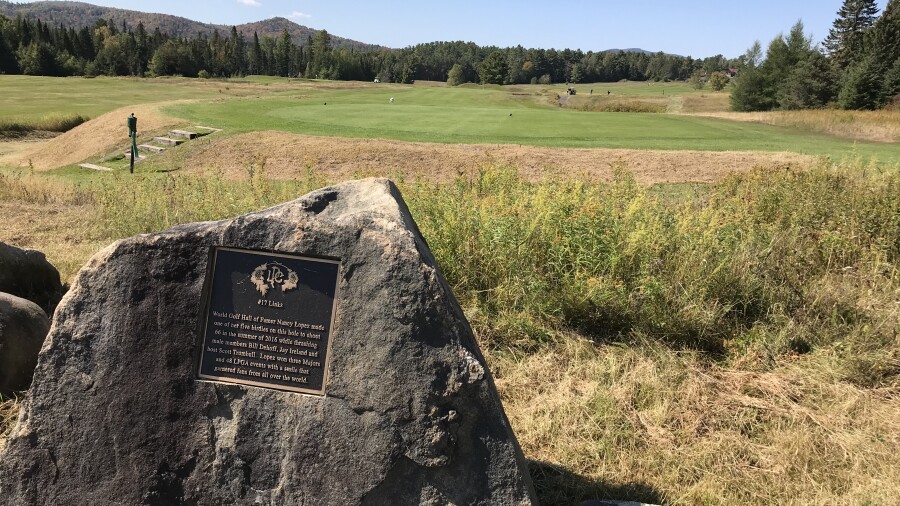 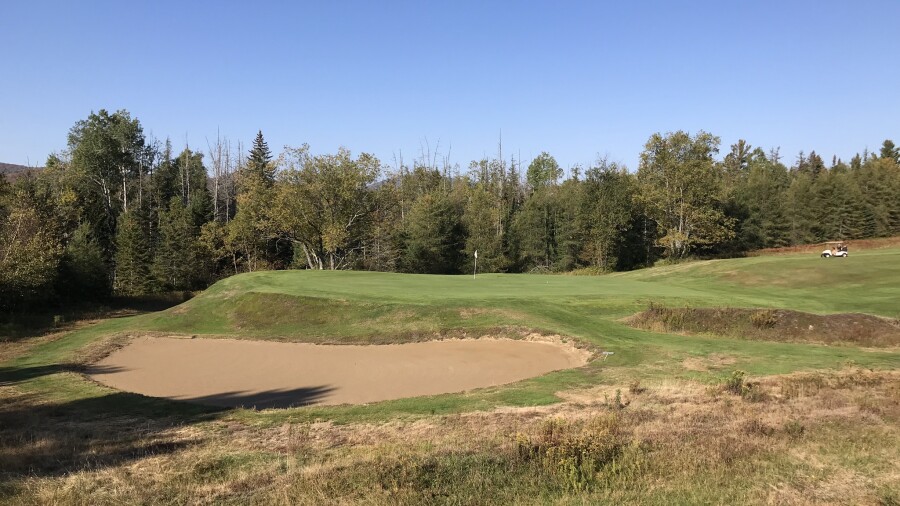 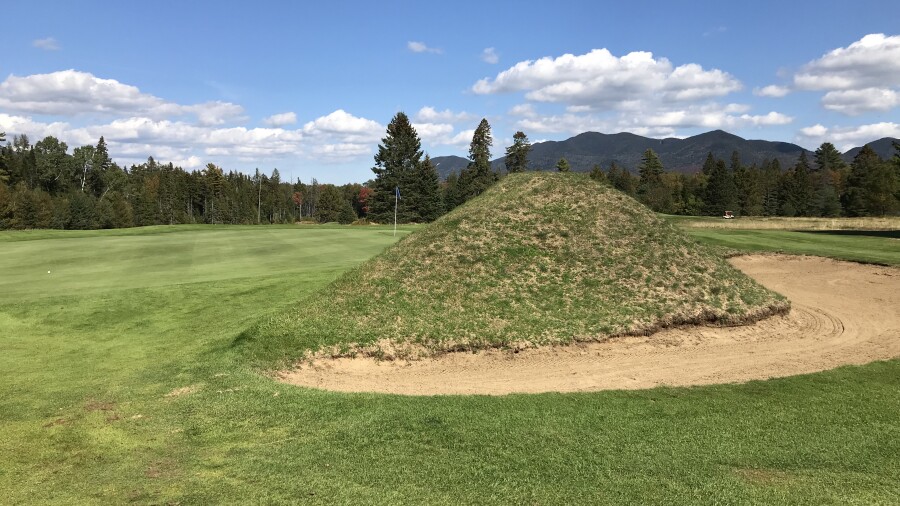 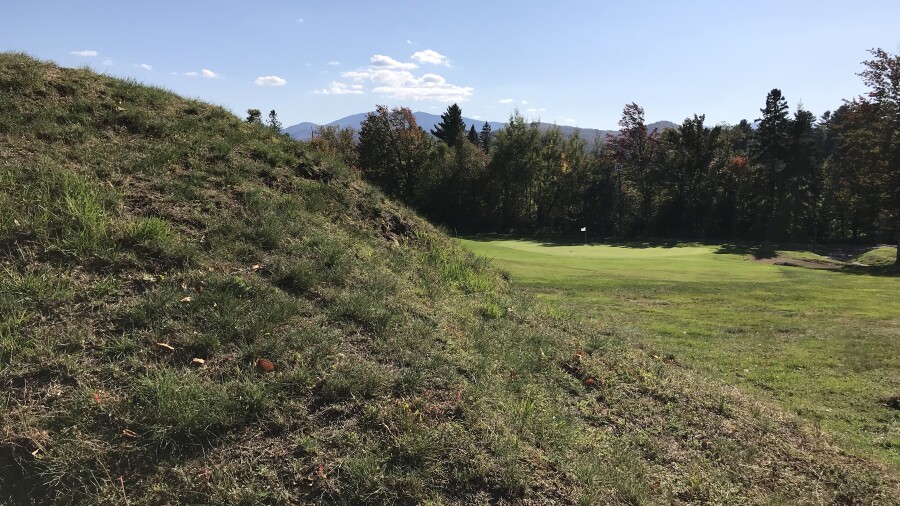 A look beyond the mounding that makes for a blind shot on the par-3 15th hole on the Lake Placid Club's Mountain course. Jason Scott Deegan/Golf Advisor 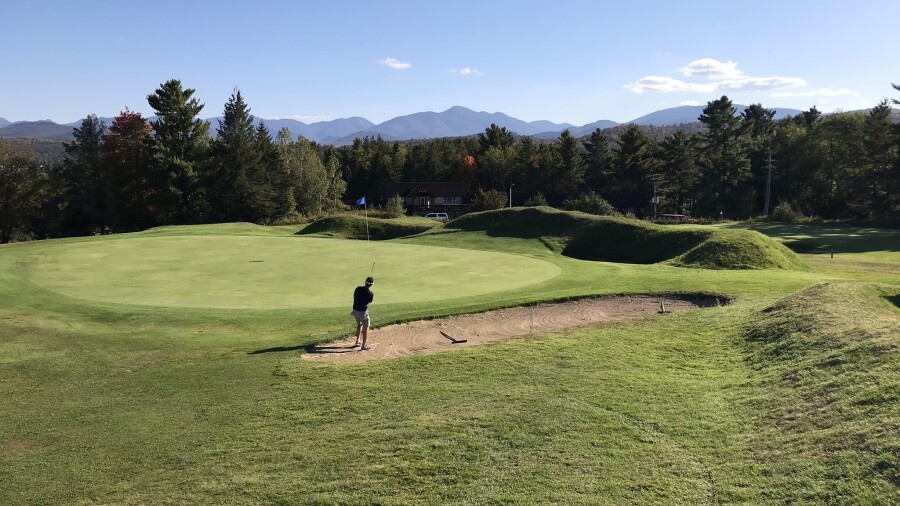 A golfer hits out of the bunker on the 17th hole of the Lake Placid Club's Mountain course. Jason Scott Deegan/Golf Advisor

I had more fun on Mountain, a super quirky 6,501-yard course with MacKenzie roots. There are so many oddities thanks to more hills and elevation changes: The back-nine starts with two 600-plus-yard holes that might be the longest two-hole stretch in golf. Next compare the yardages of the par-3 12th (280 yards) to that of the par-4 14th (242). Two blind par 3s, a shot over mounds at No. 15 and an uphill climb to No. 17, left my head spinning ... in a good way.

The Golden Arrow Lakeside Resort on Mirror Lake was my final resting place before the two-hour drive back to the Albany airport in the morning. In baseball terms, this golf trip wasn't a home run. It was a grand slam.

I enjoyed the article very much. It is nice to see some appreciation for the golf offerings in upstate New York. I was pleased to see Saranac Inn receive a mention. This course may be the best kept secret in the Northeast. You sense something "special" when you play Saranac Inn. The layout is unique and seems like it is a gem dropped in the middle of nowhere which is a somewhat accurate description. The course was designed by Seymore Dunn and his Uncle Willy Dunn. They claimed Saranac to be their "masterpiece", This is a big statement considering Willie designed Shinnecock Hills