The 19th Hole is Great For:
Drinks 39
Brunch 11
Watching the Game 11
Course Challenges Include:
Bunkers 119
Water Hazards 33
Plays Long 26
This course/club is great for:
Advanced Golfers 52
Locals 50
A Weekend Splurge 22
This Course's Location is:
In the 'Burbs 44
Convenient to the City 38
Worth the Drive 33

The course has seen better times.

I have to admit that the course has improved since last season. However the details have been neglected. There are a great many sand traps and not one of them had been raked or ready for play. The sand trap was a solid mud area. The fairways were cut but the second cut was irregular. The hole numbering changed a few years ago but the markers had not changed. On some of the markers there where makeshift signs covering the original, but many had fallen off. The washrooms on course could have been cleaned better. The inside handle of one ladies washroom has torn off and I had to rescue a lady trapped in the washroom. Signage was nowhere to be seen. I had to direct someone who was playing the course for the first time on how to reach the 10th whole on the other side of the property.

Last year carts had gps and course looked in better condition. No drinks cart, no gps and no deals when staying at hotel. No ice bucket on cart so drinks dont keep cool. Greens were only thing in good shape, fairways not like pictures thats from years ago. Playable but lots of other courses around seem better value. Pity as liked convenience of course by hotel. Range ok.

When informed the pro shop that it took over 5 hrs in the morning his respond was. What do you want me to do
Well I can tell you you what you can do
Get your fat butt out there and get things moving after we complained about slow play after 3 holes. There was a group ahead of us that played from the blue tees and average handicap was 35
Guess what. We played here many times and it will take a miracle for us to come back again
It’s not the first time it was slow. Get a course Marshall

Average course but had a good time

Played Heron Bay for the first time in 8-9 years.

Course conditions are average but nice. Greens were nice. Fairways and tee boxes were a bit long.

They definitely need to work on the bunkers. All of them.

Had a good time. We played in less than 4 hours. I would recommend as long as you don’t paytop price to play there

This was my first TPC Course and it had a great layout. Checked in and went out to hand in my slip to the starter before we hit a few putts. We had about 27-30mins before Tee off but The Marshall insisted we had to go then or we wouldn’t get out. I debated a bit but decided not to challenge the issue so we went to the first tee. All in all, the course had a great layout. Most of the tees were good although grass was long. Fairways were rough in places. Greens were in good shape but were all fairly hard. Bunkers were prett bad but the views and the price ($26.70 each) made it worth the time. The two young gentlemen who were taking care of carts and course (Marshall’s)
Were friendlier then the first one we met. Will play here again, maybe in August.

Course won't be open in August, They close it for the summer because "it floods" aka nobody plays there because its a dump. Wont reopen until mid-December.

Just to follow up, Heron Bay reported back to Canam Golf that I was a “No-Show” for my tee time. This was a bit dumb as I had to use my name to check in. Don’t know how or why this happened but obviously there are staff problems here. Canam Golf is a great service that I use to book tee times here in South Florida.

Good day ..the course could use a lot of work. The staff is friendly but not to well informed. No cart service on the course so on a hot day you're not getting a drink until you turn around on 9.

I love all the bunkers across the course, makes it fun and challenging!!

GOOD VALUE FOR THE MONEY

My group travels to the area every March since 2001. We played Heron Bay each year from the time it was a TPC course and now understand their philosophy. Offer a challenging course for a reasonable price. I contacted GOLFLINK to complain about the lack of GPS or yardage markers. I got a response that promised to have the lack of yardage markers addressed. The greens and fairways were really good. The fairway bunkers are really waste bunkers now because they lack sand. The greenside bunkers could use more sand and be consistently maintained. Overall when considering the price you have to realize that this is a good value.

Great course. Best course we played on This holliday.

Great golf course if you get the discount rate. Bare minimum service, not a country club. However, for $50 or less you can play on a PGA layout.

The tee boxes are cut too high, feels like rough.
-Fairways are in decent shape....not the best but very playable. The negative with the fairways are the divots not being filled AND an abundance of ant piles.
-Greens were hit and miss. They are on the slow side (all of them), but some of them haven't been rolled in months. They are bumpier than a sand trap.
-Sand traps are OK....not soft but not rock hard. it rained a day or 2 earlier and you can tell they were not raked or anything since.
-Driving range is in good shape. All grass, but again.....the grass is cut too high.
-Chipping area is in good shape for what it is.
-Practice outing green is OK. Bumpy and the nighttime lighting sucks as the lighting is blocked by an un-manicured tree in the way.

In the end, its very overpriced. I am a local resident and the course was closed in for 6 months due to "rain" aka there is nobody out there in the summer due to high rates. All Clublink did was mow the grass in that time.
If the city / county / private owner bought the course or if Clublink put some money into the course.....it would be a gem.

Course is laid out for a PGA event (its massive), don't bother walking.

As it is, Clublink is letting this one go into the ground and hoping a developer will buy the land in a few years when the contract expires with the city.

Few things the course lacks, no 150 markers or 100 markers on fairways it would be nice if they also would have a beverage cart for drinks. Also I don't think I have ever seen a Marshall on the course

This was one of the most disappointing rounds ever. The course is advertised as the former home of the Honda Classic. They fail to mention that the course is in less than municipal course condition now. All bunkers were dirt with a sprinkle of sand. The tee boxes were often similar to the rough at my local course. The greens were soft and the ball was bouncing on most putts.

Clearly they are putting zero effort into the upkeep of this course but still charging a premium because of what the course used to be.

It rained the night before which didn’t help because it was cart path only but there is no GPS on the carts and no yardage markers on the course. Give me a 150 stake at least! One of the greens was so lumpy, it could not have been rolled since the last PGA tournament there years ago. Don’t waste your time and money! 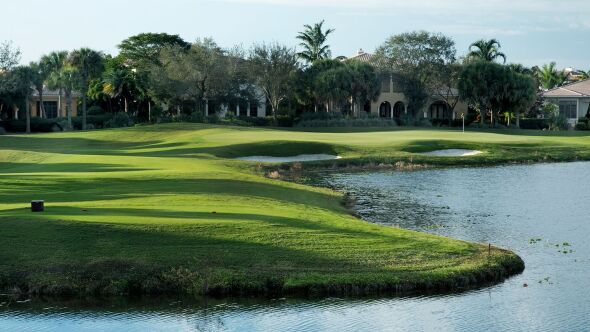 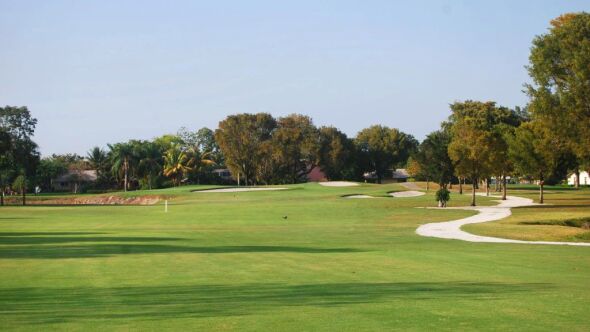 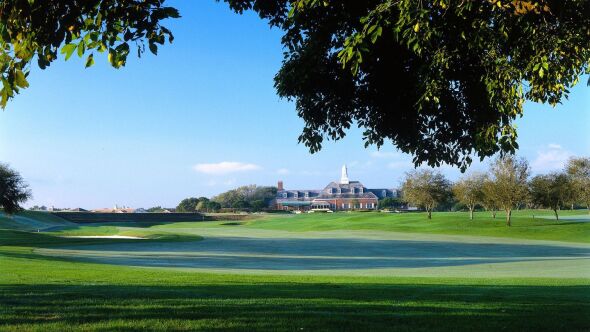 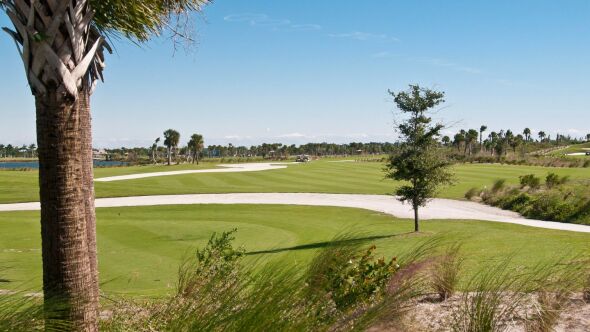 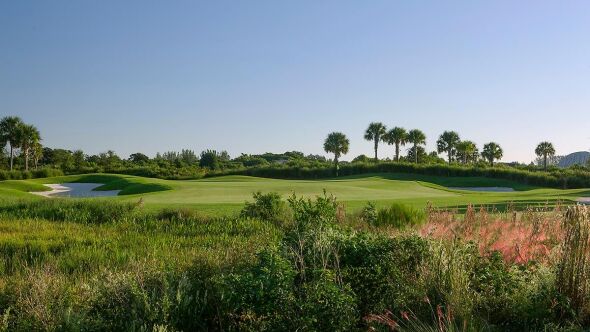 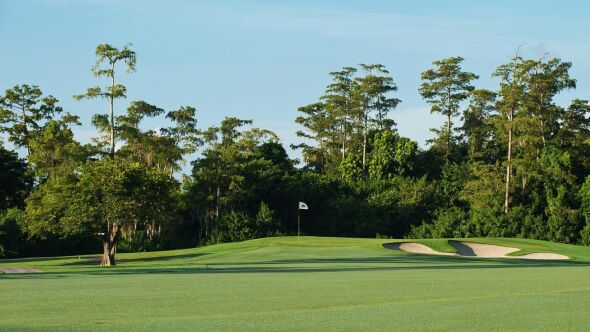 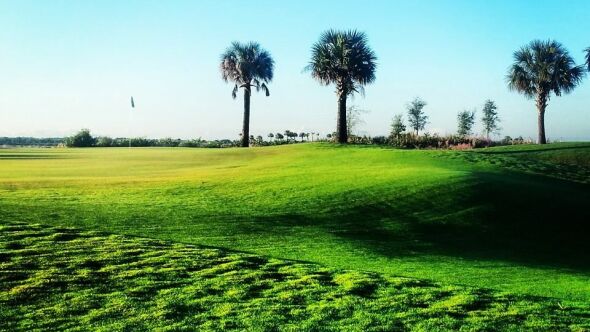 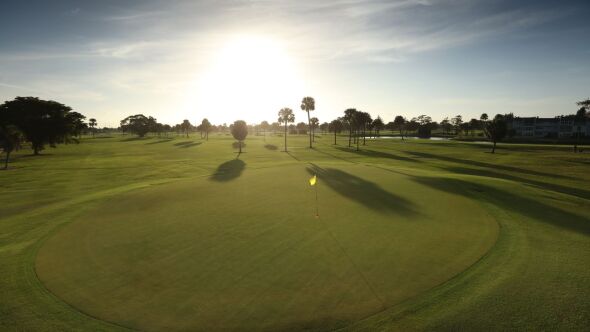 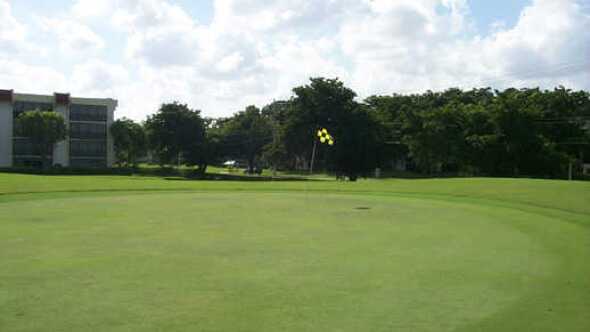 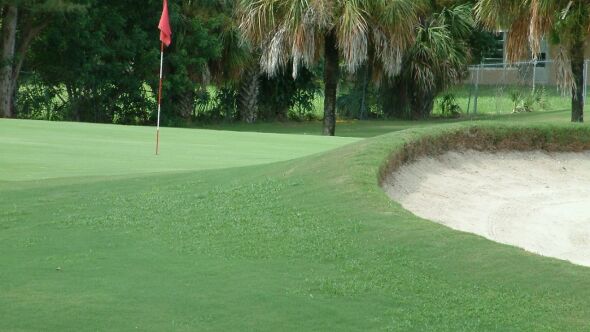 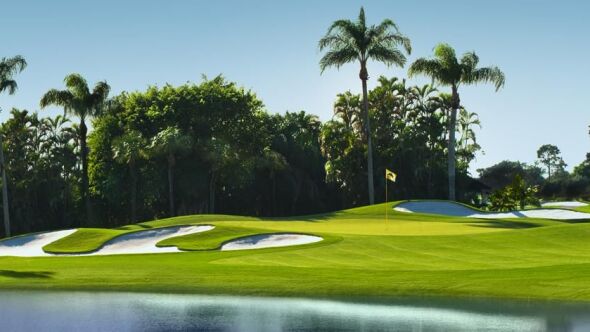 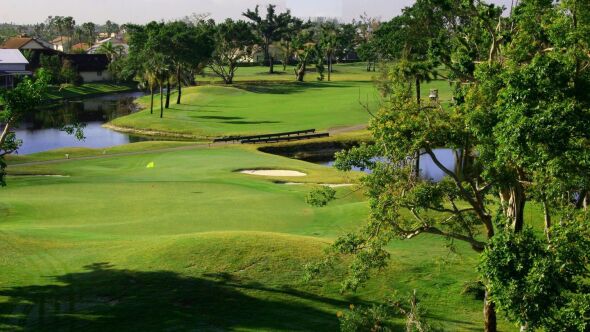 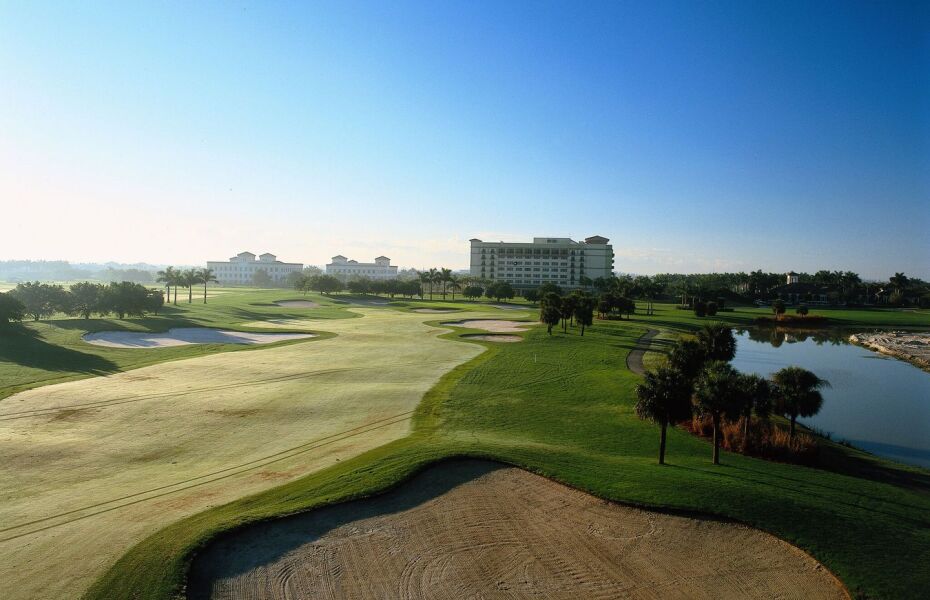 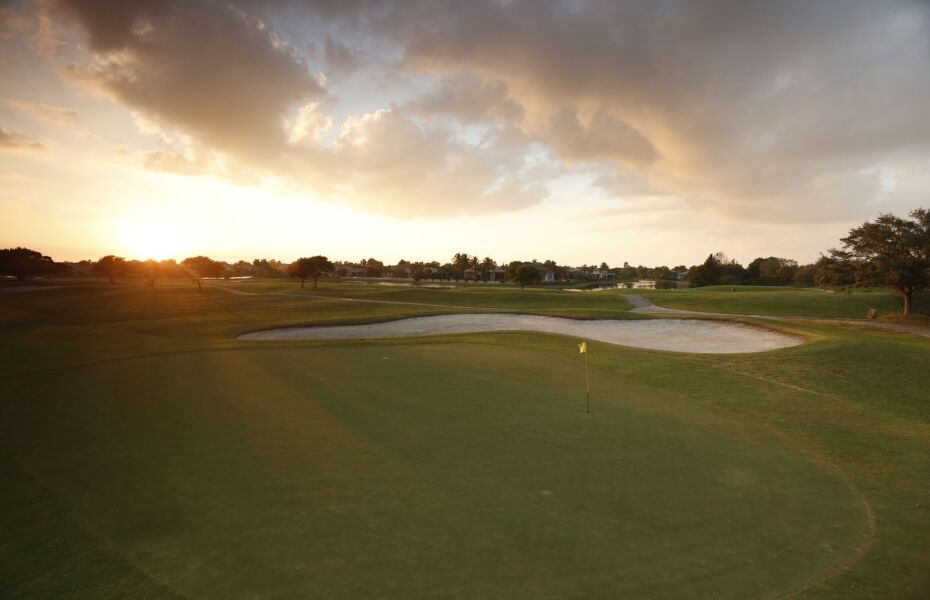 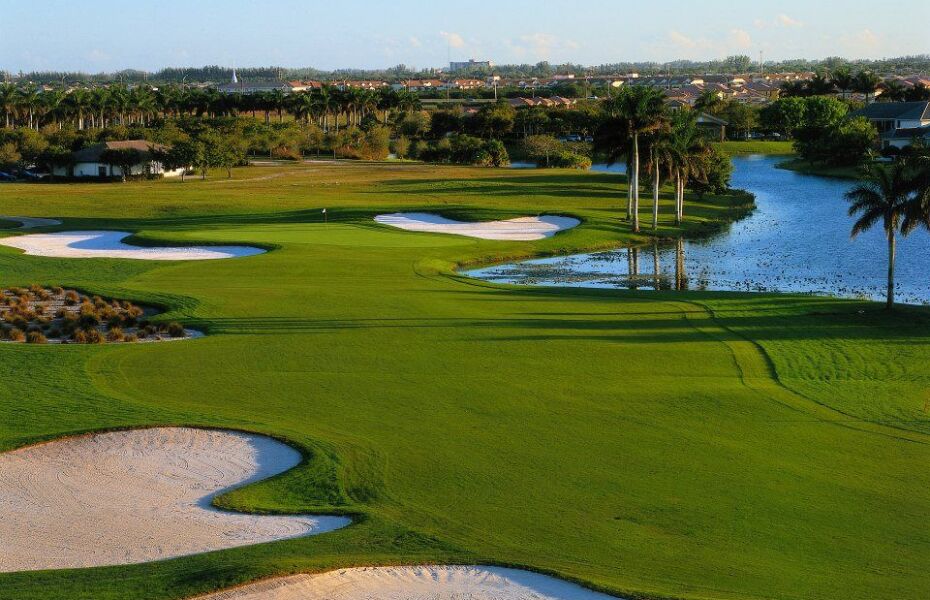 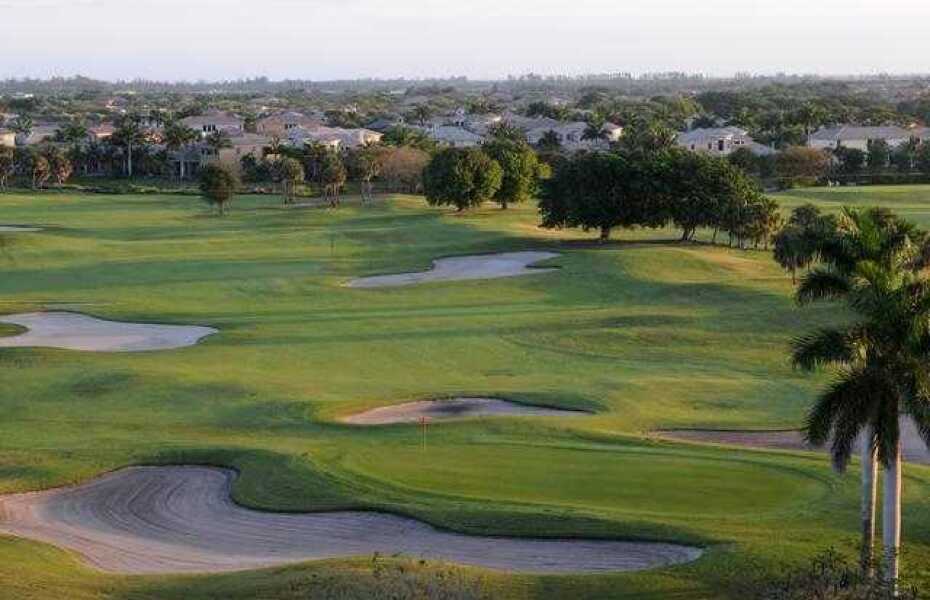 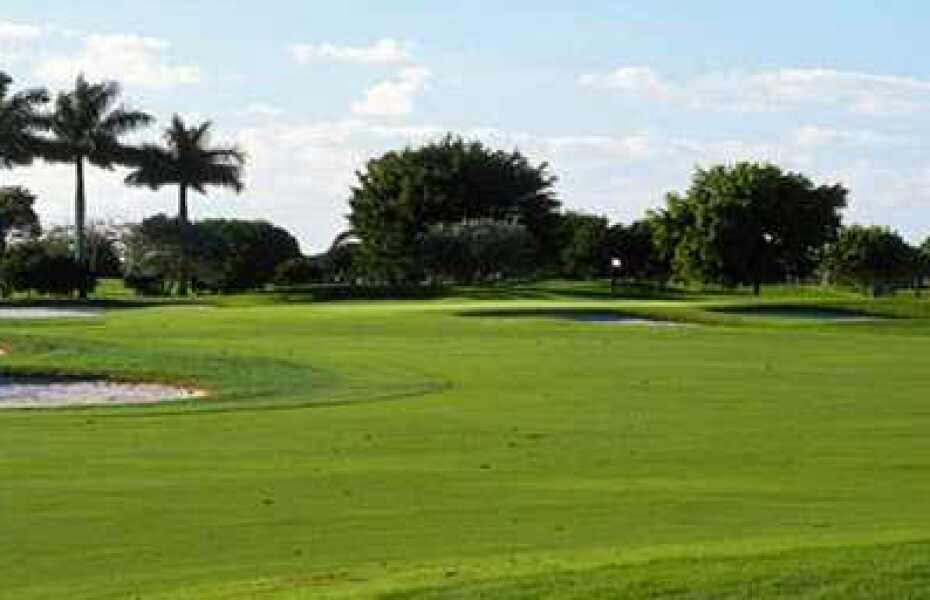 A view of the 10th green, angled from left to right with bunkers on both sides at Heron Bay Golf Course 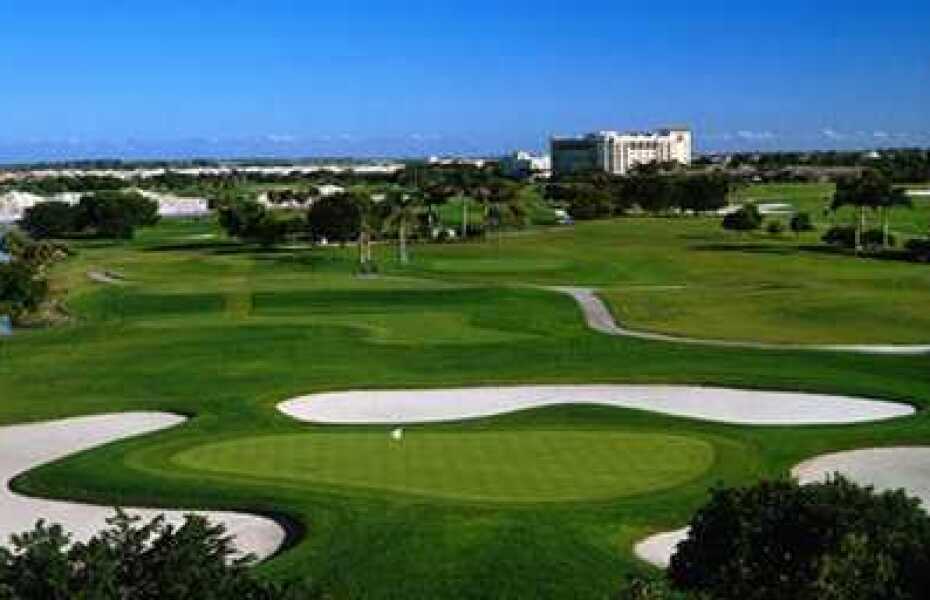 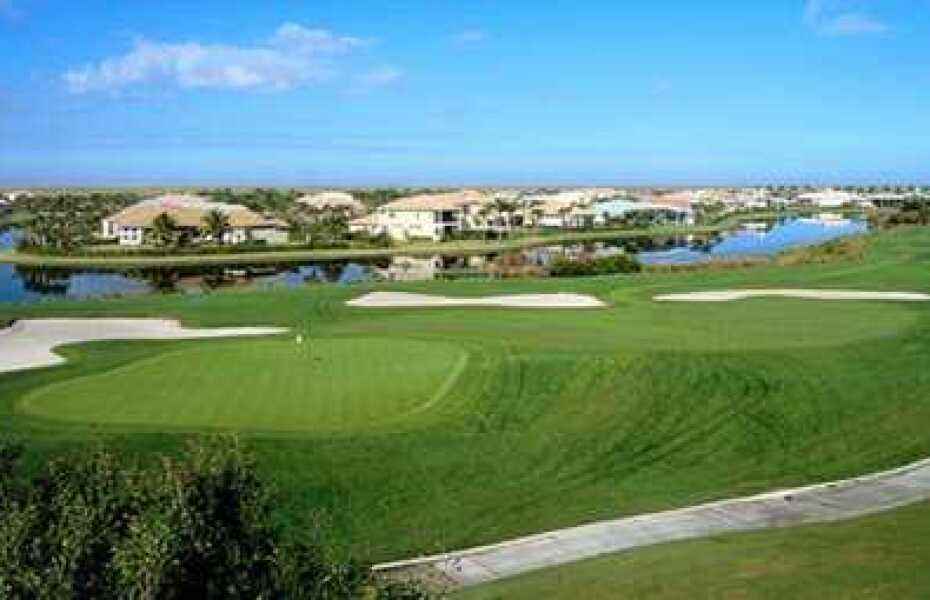