The 19th Hole is Great For:
Drinks 7
This course/club is great for:
Locals 12
Walkers 10
Playing Multiple Courses 6
This Course's Location is:
In the 'Burbs 8
Convenient to the City 7

Overall it’s worth it. Gets the point across, especially for beginners and intermediate players. However, there are way too many trees in the way, unless you are a professional, it is hard to get around them. Screws up your handicap in a major way. Other than that, it’s affordable, relaxing, you don’t feel rushed if you go after 3:30p. Great place to learn.

Tee boxes and fairways are in very bad condition.
Way too much dirt and dry spots all over the course. Greens in very good shape.

The rough is awesome. Plenty of it, and very lush all around the edges of fairways and around the greens. That’s how it’s supposed to be and how it used to be when I first started playing this place almost 40 years ago, before the stupid metal woods came into the game LOL. I hope the rough stays this way. Don’t change it.
Greens were terrible. Dead slow. And every green is different. Some soft and mushy, others rock hard and jagged, and others in-between with vertical mower marks like tracks or rails. But mostly all of them were just darn slow, and horrible.
There are some serious dead dirt patches everywhere on pretty much every hole, and some are finally being marked, so hopefully they put some work in.
What is it with the bunkers???? Embarrassing.
Got stuck behind a couple groups who were absolute novices who weren’t ready to be on the course as they hacked their way around the place hitting their 7th and 8th and 9th shots into the greens, and they were behind by a hole the whole way. We stood on every tee pretty much, and took 25 minutes longer than it should have, finishing the round in 4 hours 40. Pretty sad.

Great course to score on. Wide fairways, well maintained., with many personality layouts, both for draws and fades. Also theres eagle opportunities with short par 5s

Too many golf beginners that delays pace of play & these people just collect the balls.
Dress code are ridicules. Tank tops, carrying dogs on the carts
Not recommeded

I did like the house and the conditions were pretty good! The course seams a little long and boring for me.

The course was in pretty good condition. The greens were punched, but some of the greens had a lot of the debris from the punching and ruined a lot of approach shots and putts. Pace of play was great on the front 9, but the back was very very slow. Had to wait 5 or six minutes between shots.

While the course has a cool layout, the fairways were dirt and weeds, and the course smelled awful. 80% of the water features were dry and smelled horrific (rotting fish and vegetation).
Apparently they are converting it from 18 holes to 12??? I would definitely skip this place. It's like a Mad Max dystopian course.

Had a great time. I was paired with 3 other people. We played fast and rarely had to wait. We finished in 4 hours. Fairways and tee boxes were in fair condition considering the drought. Greens were in good shape but were extremely slow. Very hard to adjust to. Overall, i had a great time.

Not in as nice of condition overall as recent months. Wet, soggy in many parts; dry patches and some burnt out lies in others. The greens have been better at Balboa imo lately. Pace of play was a bit longer than it shoulda been, backed up on the 15th par three which slowed things down. Overall, a nice day of muni golf!

If you ever get paired with a guy named Rim

Make sure he doesn’t “gimmie” your birdie putt.

Don’t you ever touch my ball and bring it to me as I’m happily driving up to the green with my putter in hand ready to take pride in tapping in my ball for a bird.

Don’t ever rob someone of that!

The course was good otherwise. Just got paired with a Richard- head who didn’t have any golf etiquette.

You know what you’re getting yourself into when you play at Los Angeles city Public course. So there were no surprises really. Actually the pace of play was faster than normal less than four hours which was great. Tee boxes and fairways were the usual not great. The greens were really bad even for an LA city public course. Super furry, Super bumpy, super slow and super inconsistent. I shot a great score so it was all worth it.

Pretty cool facility overall, a lot of space to work on chipping, putting, and hang out before your tee time. Course was in above average condition, especially for a municipal course. All in all a good experience, looking forward to coming back.

Greens not cut at all. It’s even over 5 weeks since the punch, they should be in good shape like at other courses but no, here, they are spongy and bumpy, still showing where the holes were punched and those are now like obstacles sending the ball wherever, and coupled with the length of the thick grass on the greens it’s seriously sad.
And bunkers!!!! Why do they not take care of them? You would think it’s as simple as running the machine through them once a day in the morning. But nope, most of them have grass growing in them, and gopher holes too, and then nobody takes them.
How they can take money from people this way, it’s disgusting.
And there seemed to be a really slow group of old guys who just couldn’t get going fast enough that held up the entire afternoon of players, it’s a total disgrace, they’re on the wrong course to be walking, even with their battery-powered hand carts.
Just sad. 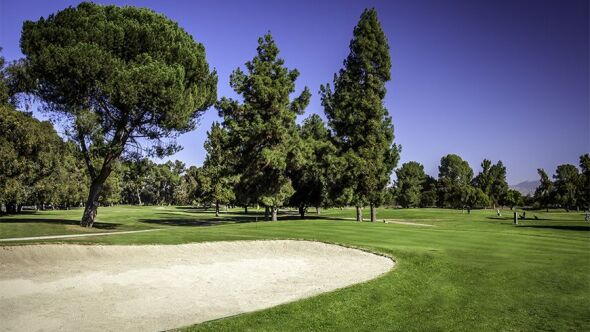 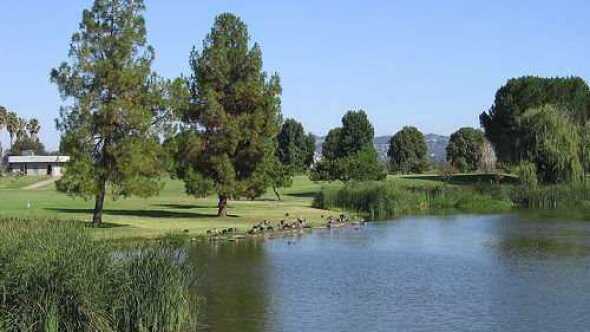 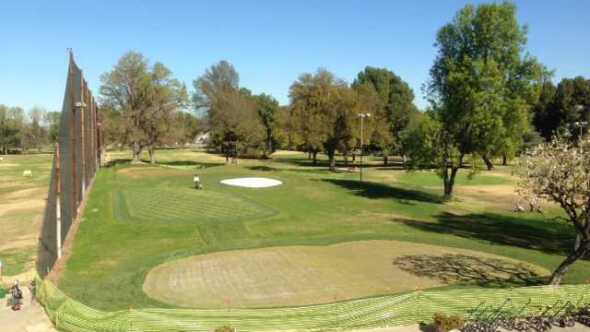 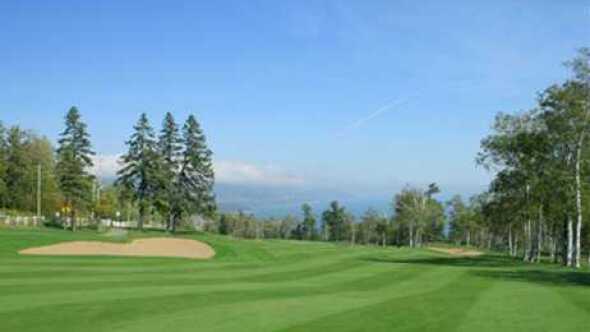 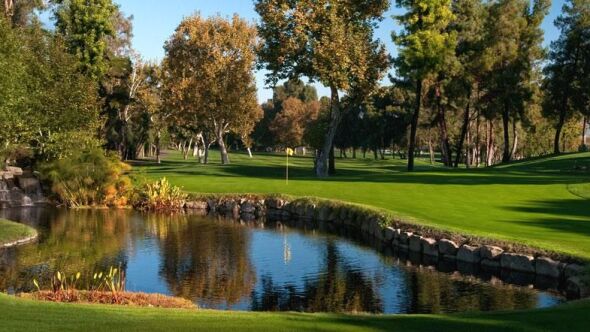 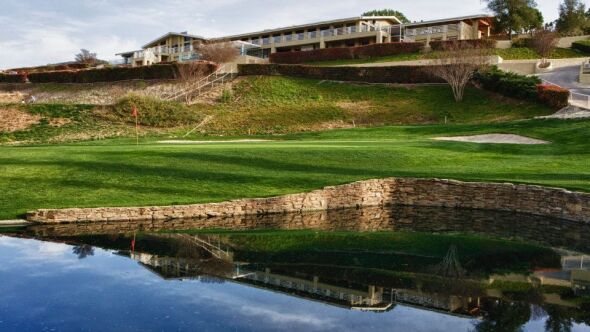 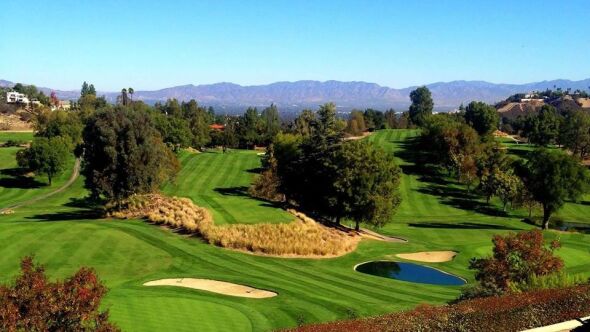 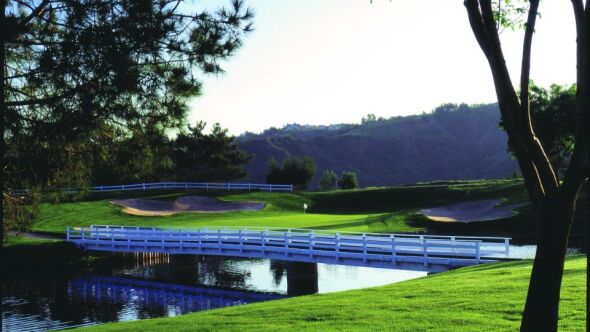 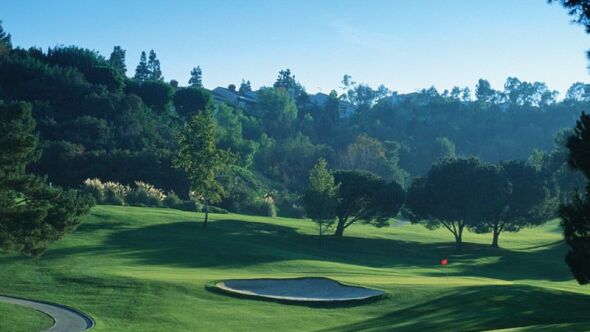 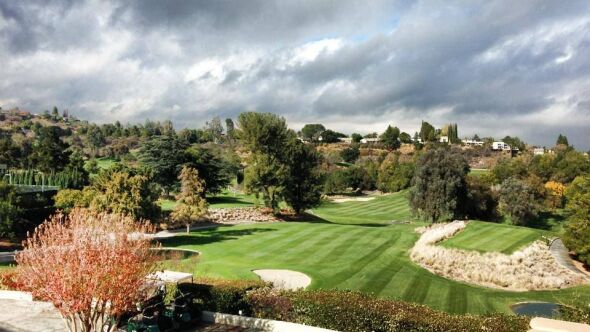 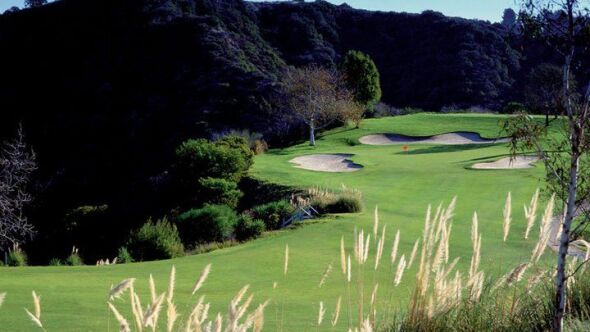 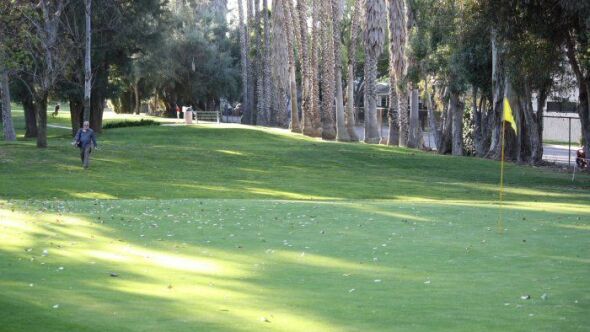 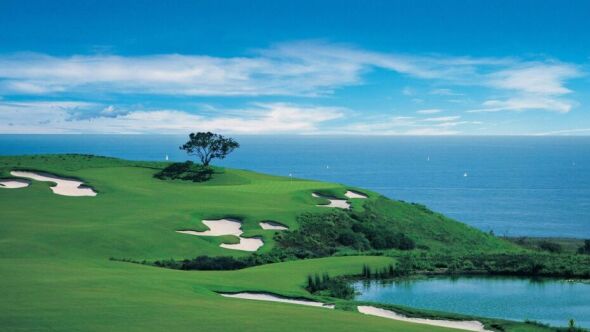 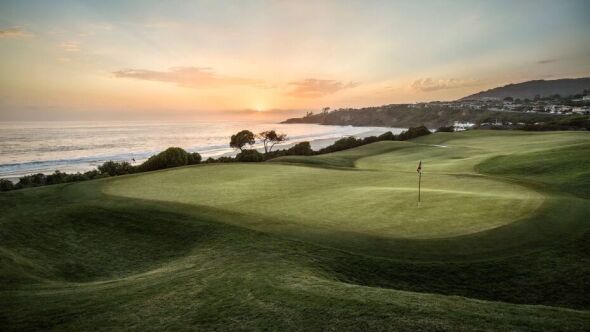 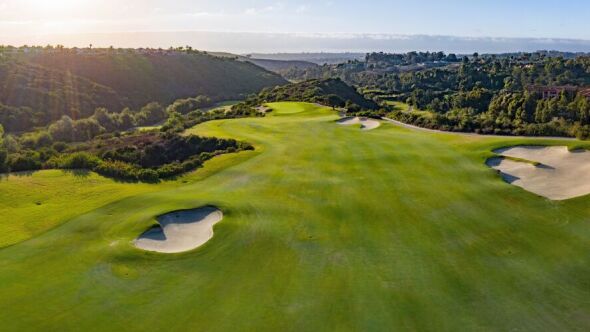 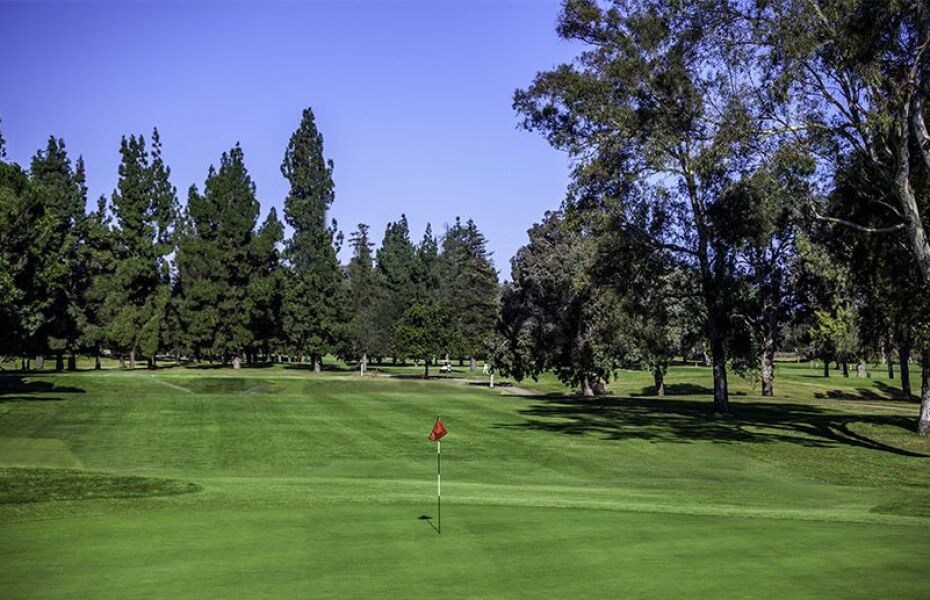 A view of a hole from Encino at Sepulveda Golf Complex. City of LA 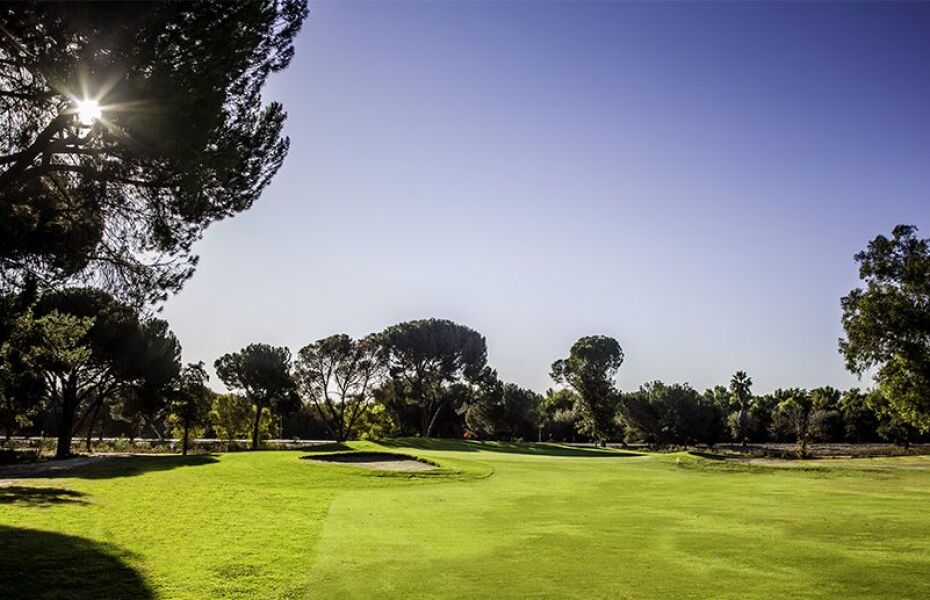 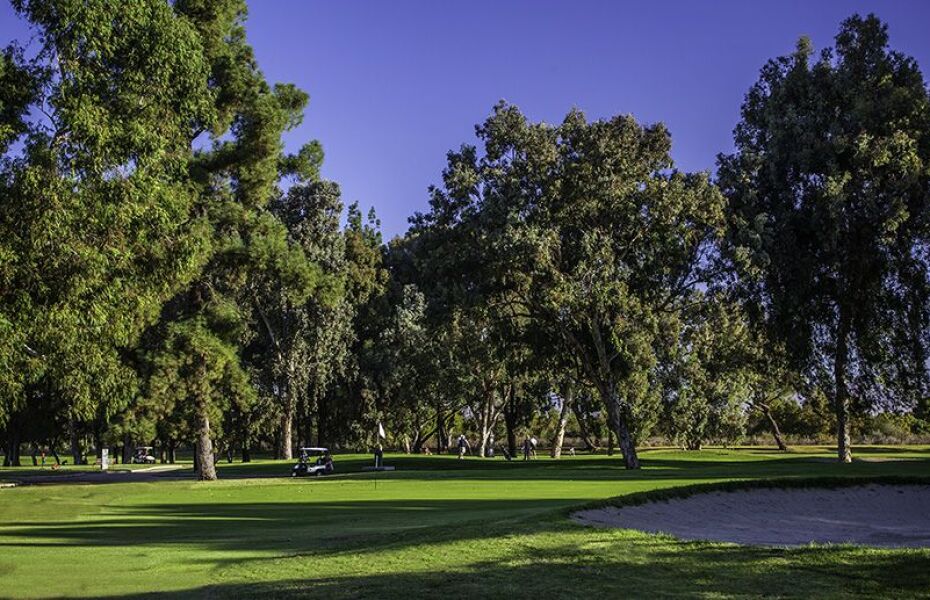 A view of a green at Encino from Sepulveda Golf Complex. City of LA 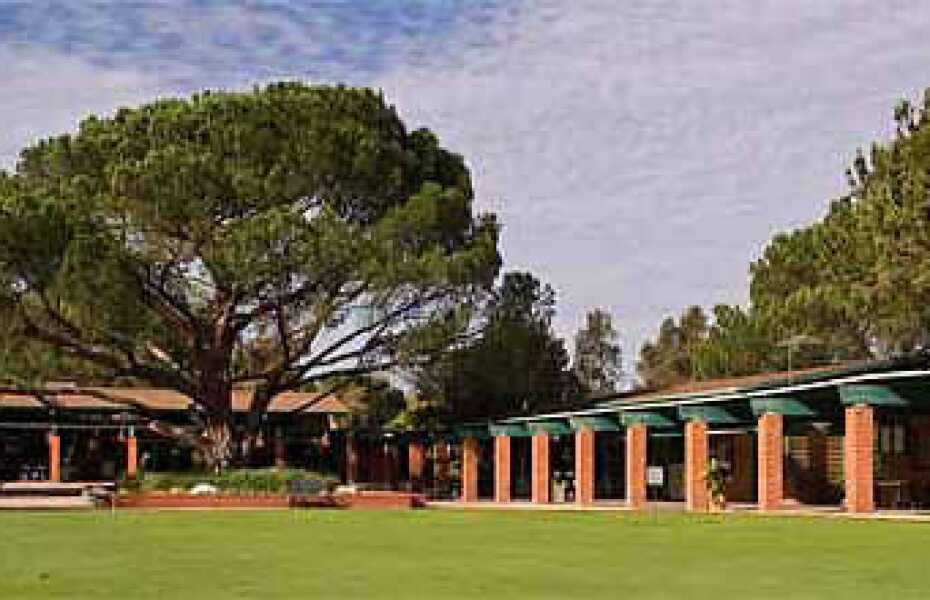