On Tuesday, the American Society of Golf Course Architects announced the passing of one of its longest-tenured members, Arthur Hills. Hills was 91.

Having set out into the profession of golf course design in the 1960s after attending both Michigan State University (a degree in science) and the University of Michigan (landscape architecture), Hills would have a hand in the design of more than 350 golf courses, more than 200 of them his original designs.

Whereas many architects plied their trade close to home, Hills would become a global-scale architect, with particular influence over the arc of modern golf course design and development in both the Midwest and Florida.

Northern Michigan, which GolfPass recently ranked #8 on its list of the top 100 golf destinations in the world, is home to several Arthur Hills originals, none more popular than the 27-hole Bay Harbor Golf Club, whose Links nine boasts spectacular views as it winds along Lake Michigan.

Snowbirds who make their way south from the Midwest every year are likely to encounter still more Hills courses in their winter destinations. He designed dozens in Florida, both on the Gulf and Atlantic coasts. In Naples, Hills designed courses for clubs like Bonita Bay and Quail West, while on the east coast of the state, Willoughby Golf Club in Stuart and the Preserve at Ironhorse in West Palm Beach bear his imprint. He also remodeled Miami Beach's two venerable courses, Miami Beach Golf Club and Normandy Shores Golf Course.

Like so many long-tenured architects, Hills leaves a legacy not just of courses but of colleagues, partners and proteges who continue to build and renovate golf courses today. Like his mentor, former Hills associate Chris Wilczynski is active both in his home state of Michigan and in Florida, where new-build courses like Esplanade at Azario Lakewood Ranch exhibit not just his own flair, but some principles passed down from Hills. Other architects like Drew Rogers, Steve Forrest and Keith Foster have Hills partly to thank for helping guide their design careers as well. 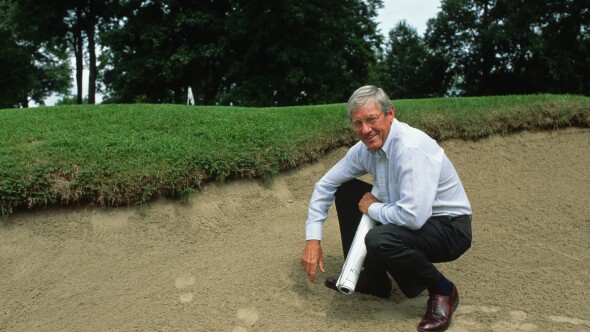 Arthur Hills, golf course architect
One of the most prolific modern architects, Arthur Hills (1930-2021) left his mark on some 300 golf courses over a career that spans more than 50 years. Ever since his first design, at nearby Brandywine Country Club in 1967, his firm has been based in his hometown of Toledo, Ohio.

NEW-LOOK 'GRANDDADDY' - The oldest course in Myrtle Beach, Pine Lakes Country Club, is going under the knife this summer. Craig Schreiner, who modified the course in 2008, is returning to make some further improvements to the Robert White original. The main tasks include the reshaping of bunkers and the replacement of finicky Paspalum greens with Sunday Bermuda, which has worked nicely at several other area courses. [LINK: ]

YALE'S NEW SUPER - The pandemic took a severe toll on the historic Yale Golf Club in 2020, to the point where members, students and fans of the C.B. Macdonald masterpiece wondered if the course would survive. The university just took another big step in settling that question, hiring a new superintendent, Jeff Austin, who has worked at both Quail Hollow Club and Augusta National Golf Club in his career. [LINK: Yale Daily News]

LOST MACKENZIE COURSE UNCOVERED - Rhayader Golf Club is not quite a household name like Augusta National, Cypress Point or Pasatiempo, but this 9-hole course in Wales, lost to time for several decades, is being rediscovered thanks to the efforts of one local golfer. [LINKS: The BBC, The New York Times]

BORDER DISPUTE - Aroostook Valley Country Club's border-straddling location has created a problem for its American members. The semi-private club's entrance and pro shop are located in Fort Fairfield, Maine, but the main clubhouse and all 18 holes sit across the Canadian border, in New Brunswick. Canadian COVID-19 protocols allow the club's 90 New Brunswick-side members to play the course, but bar access from even dues-paying Americans. [LINK: Bangor Daily News]

GOLF-ADJACENT - Ever since they burst on the scene, the Kardashians have always been exceedingly easy to keep up with. And while their show of a similar name on E! is in its final season, nevertheless they remain well in the global pop-culture mix. Kim Kardashian made crossover headlines recently when she and friend La La Anthony (whose husband is NBA star Carmelo Anthony) hit the driving range with spiffy new sets of Callaway golf clubs and posted videos of the outing on Instagram. Ladies, please reach out if you want a couple comped GolfPass memberships! [LINK: Daily Mail]