The 19th Hole is Great For:
Drinks 14
19th Hole Scenic Views 8
Course Challenges Include:
Elevation Changes 27
Undulating Greens 21
Bunkers 16
This course/club is great for:
Locals 17
Advanced Golfers 14
Seniors 13
This Course's Location is:
Convenient to the City 16
Worth the Drive 13

The new owners are making renovations to the course, but it was still a thrill to play this Ross Gem. Really challenging. Can’t wait to return. Great day.

Donald Ross would turn over in his Grave

This course is under massive repairs. It is not worth the money we paid to play. The staff was very friendly. The only thing good about the course was the greens. Almost every sand trap was under repair. If they ever complete all complete all the renovations it could be a wonderful course.

Under construction many holes. Wait a couple of years

I was so excited to play this historic course on a 50th birthday trip for a longtime golf and college buddy. We booked it online, prepaid $75 a piece.

When we arrived, we were greeted by a kind man bringing us our cart who said that there were renovations going on and gave us our first hint of trouble. Saying "Next summer, this place will be great." Not an inspiring beginning.

In the clubhouse it got worse. Walking in we overheard the woman working the desk say that 11:30 (our time) was available, which was odd, but maybe we were off in our records by 10 mins or a two-ball would be joining us, which is great. Certainly something like that. But she decided to put the person on hold, and take care of the guy in front of us in line and us.

Guy in front gets the same story about the place being under renovation and she goes on about bunkers being GUR, that there were dirt fringes in many places, and sod in a great many places, just laid out. Also GUR. She then said they were charging only $50 instead of the $75 we paid. Overhearing this we shrugged our shoulders and thought let's play away.

Get up next and Arlene (I think?) says that we called and cancelled this morning, which of course we hadn't. She's a little irritated and gets back on the line with the person on hold and says that that time has now been taken, which I'm certain delighted that person on hold.

We ask how they'll process the $25 refund for each player and she says they won't do it. She says we booked through Golf Now and she can't process the refund, but we booked on the course's site, we explain. She says we wouldn't have noticed but it's actually run by Golf Now so we have to go to them, but the guy who booked doesn't even have a Golf Now account so they can't help us either, after a long call outside the clubhouse to GolfNow customer service.

Back to the desk and explain and she offers us a bag of rangeballs instead. For $25? I say that we want to play all day so they can certainly make it up to us with a replay or lunch between, etc. They are confident that we can make it work out.

We play our 18 and the place is trashed. Quicksand-esque dirt green-complexes, loose sod aprons, open fires where they're roasting burn piles as billows of smoke waft down the fairways while music spills from the workcrew's boomboxes.

We finish 18 just as the skies open up with bucketloads of rain (I made a great up and down for par out of the back left bunker in the sideways rain, what a treat!) We ran inside, upstairs to the patio for beers and sandwiches.

I ask the pro, since radar shows this is just a little band passing by, if they'll open for play after the rain clears, he says yes, go enjoy lunch and we'll work it out.

After lunch bills arrive with no comps, we head to the clubhouse. Since it's my buddy's birthday (and because I'm Sicilian and from New Jersey) I offer to the talking.

Time now, 3:30, sunset in 4 hours. I say we'd love play again, and the pro says now for the first time, "that's not gonna happen." Huh? Because he'd have to keep a kid there to take in the cart, he tells us. I say, sounds great for the kid too! Easy hours. Pro says no. Not gonna happen. I say well, give us the $50 we overpaid then, he says no way. This guy.

I declare we have a big problem and he gets super huffy with me, tells me Arlene shouldn't have "let that come out her mouth" that they'd do something for us. He's never had a problem with her before, he says, and I remind him that he still shouldn't, she was great! He's super mad and although I wanted to cuss him out, I didn't, and said I wasn't leaving his clubhouse without that cart for 18 or the $50.

He declares, WE'RE DONE, and barks at the employee to "Get this guy a cart and get them out of here."

I say thanks, and we play a construction site for the second time and try to put that situation behind us.

We spin around in 3 hours and change and park the cart in the covered area by the clubhouse and realize there is not a soul there anymore. All that for this?

Beyond that nonsense, they've destroyed an historic course in an attempt to lengthen and toughen it up, they're extending tee boxes and adding loads of more modern looking bunkers to compete, but at a horrid cost.

I'm reminded of a one-word review from Spinal Tap.

At least 3 holes were unplayable, because of heavy equipment between approach shots and Green complexes. Because of new sod and Ground under repair, sometimes had to walk 50 yards to find a playable at $61/player, a huge ripoff in this area.

Lots of work going on but you can tell it’s going to be great. Very playable given the amount of dirt moving around.

We used to enjoy this course. However, construction on every green. Destruction of over 10000 beautiful trees, to install waste areas. Not worth the money or time during the renovation.

Wait to play this course in a year. Right now # 2 is closed and a temporary hold for one of the back nine.

This is the 3rd time I have answered this survey

What a great Gem

If you can overlook the restoration and see the image of what Donald Ross once saw this place is awesome! Greens are in great shape and it was dormant fairways . By October I bet this place will be absolutely perfect! A must see before they finish because it will be packed once it’s done

The course in the future will be grand. There is construction on every hole with trees being removed or new traps being designed Lots of money being spent to improve the course. Hole# 2 is not playable and a temporary green on the back , I think 15. . I would wait to play this course in maybe 6 months. I booked through Golf Now which was a mistake; At the course they would have probably let me me play for less than $30

The course will be great in maybe 6 months and the earliest. It is a mess. # 2 is closed and a sub green in the middle of the fairway on the back 9

Needs to be closed

The course has no business being open during this renovation. In two years, this place is going to be awesome and I will definitely go back and play then. However, with the amount of work being doing to the course right now, they should be closed to play.

I love this course and played it 3 times a week when I was here last year.However this year they are renovating and while most of the course is playable the esthetic quality is sadly disrupted.Also when I was there no.1 was closed and 16 and 18 unplayable.17 is marginal.

Classic Donald Ross layout without the resort cost. New owners investing over a million in renovations so there is some construction on the course with modifications to first two holes. Can't wait to return when its all finished.

Great course! You can tell they can to keep it maintained.

Worth the price on a deal!

Greens were fast and challenging,
Fairways were nicely over seeded. Can’t wait to play again!
.

Course was in great shape. Had never played before. Fairways over seeded and green for winter and greens were excellent. Tough greens and fast! 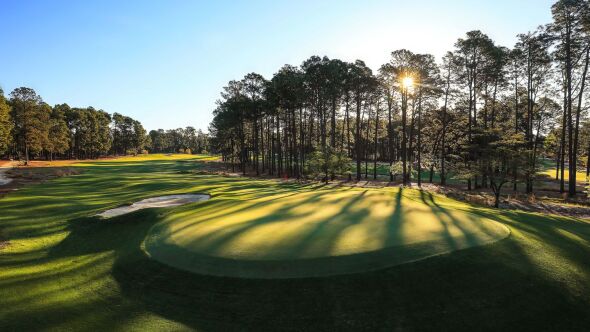 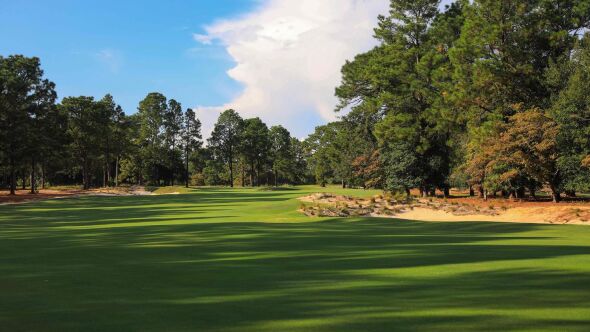 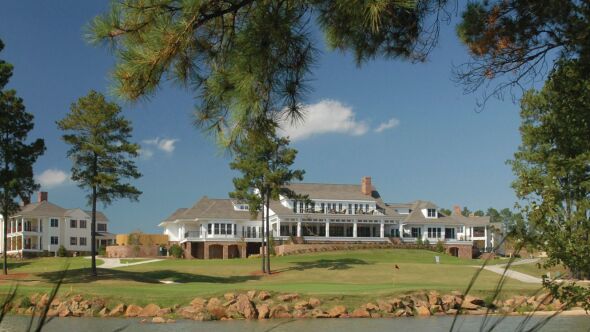 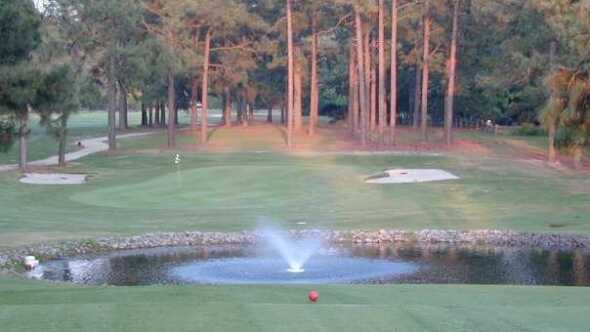 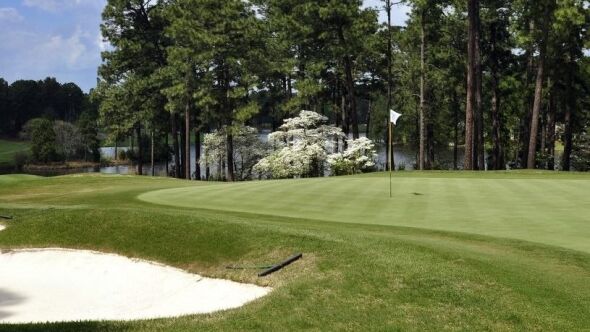 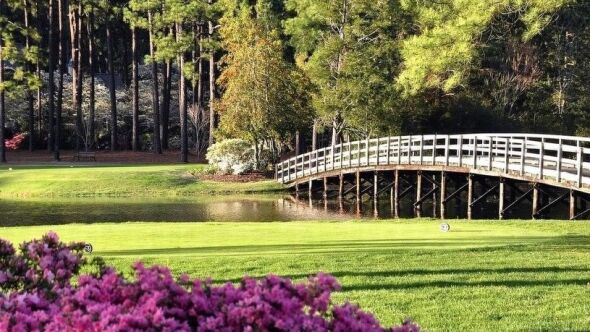 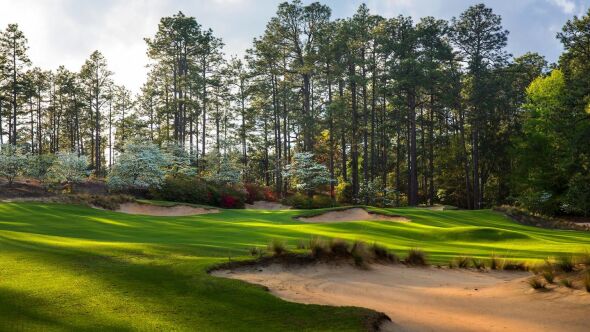 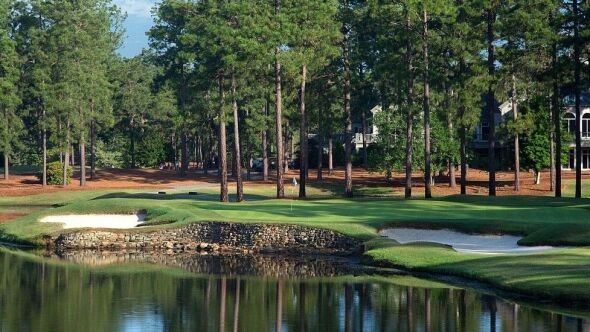 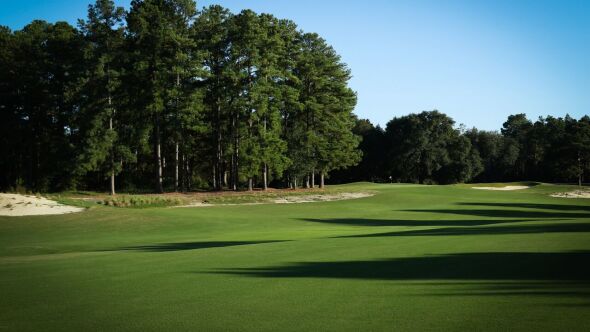 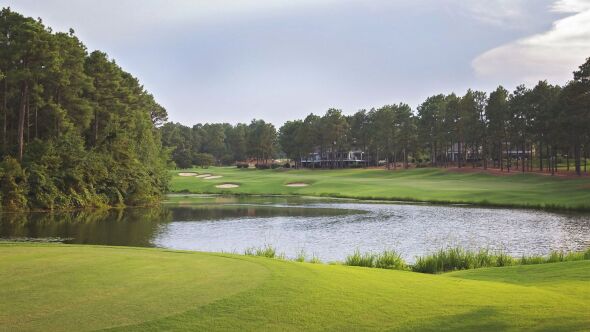 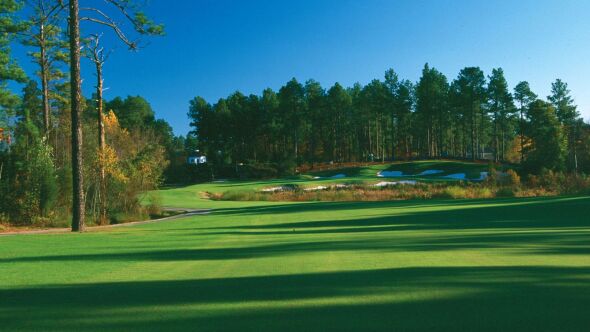 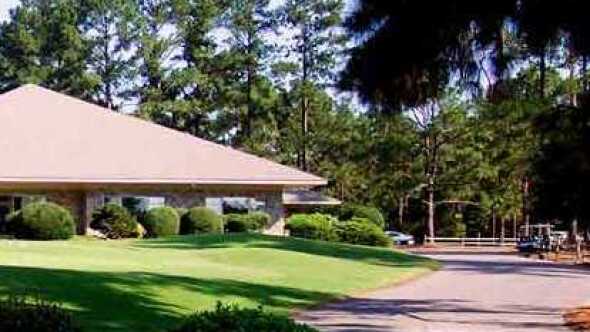 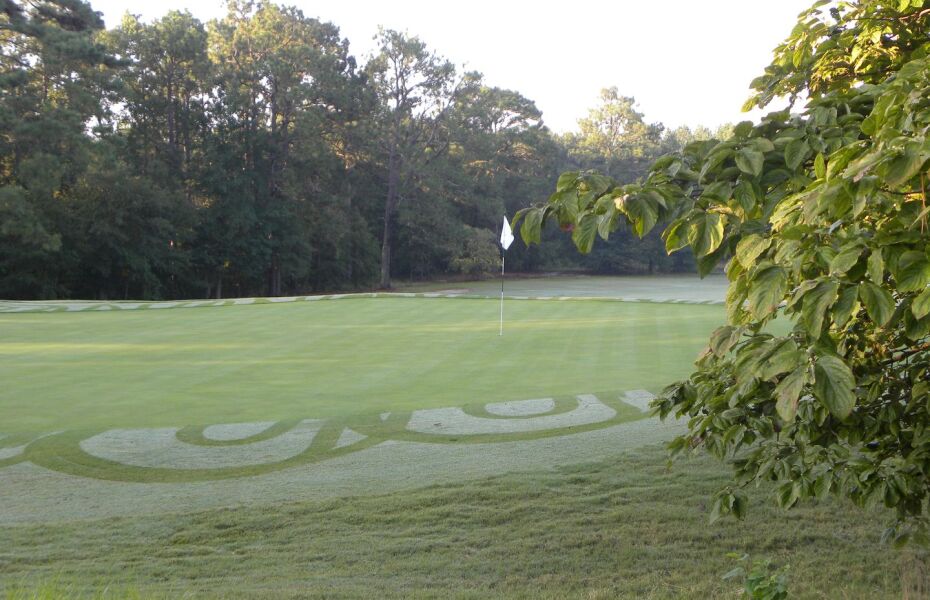 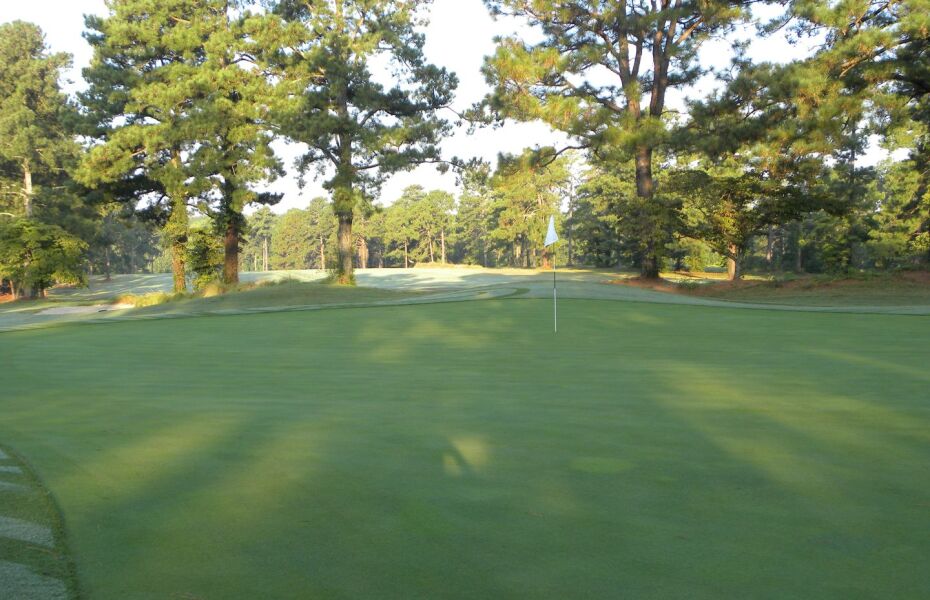 A view of hole #13 at Southern Pines Golf Club 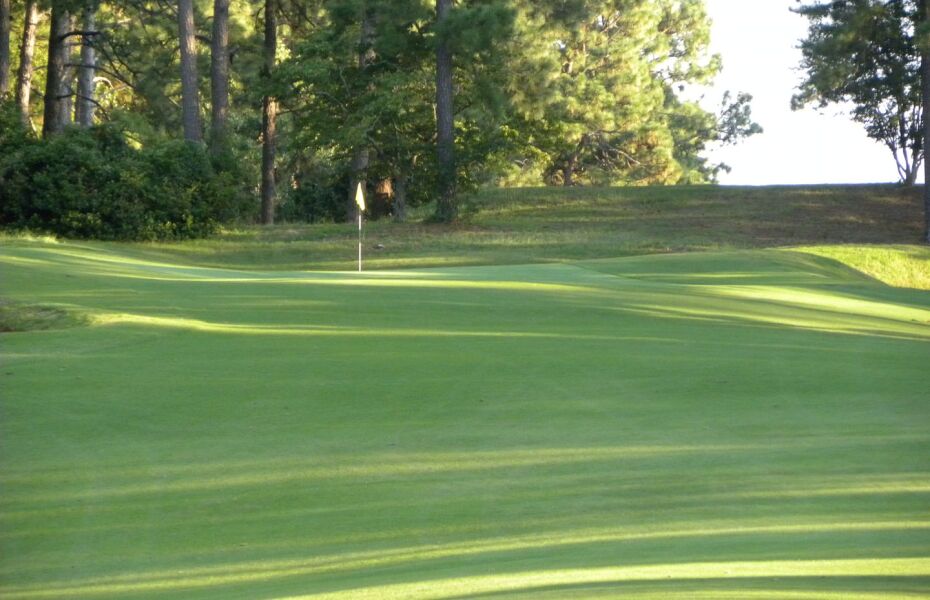 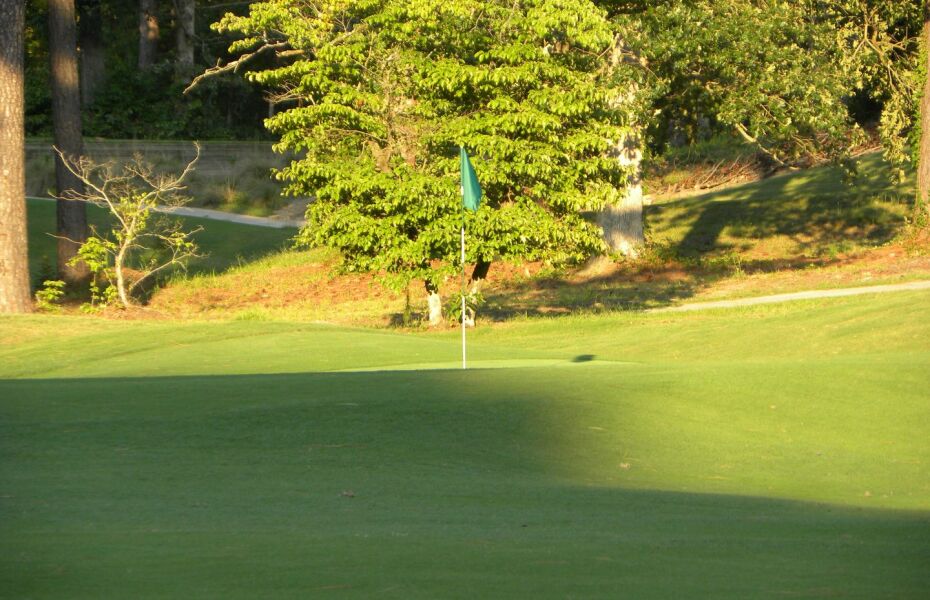 A view of green #9 at Southern Pines Golf Club 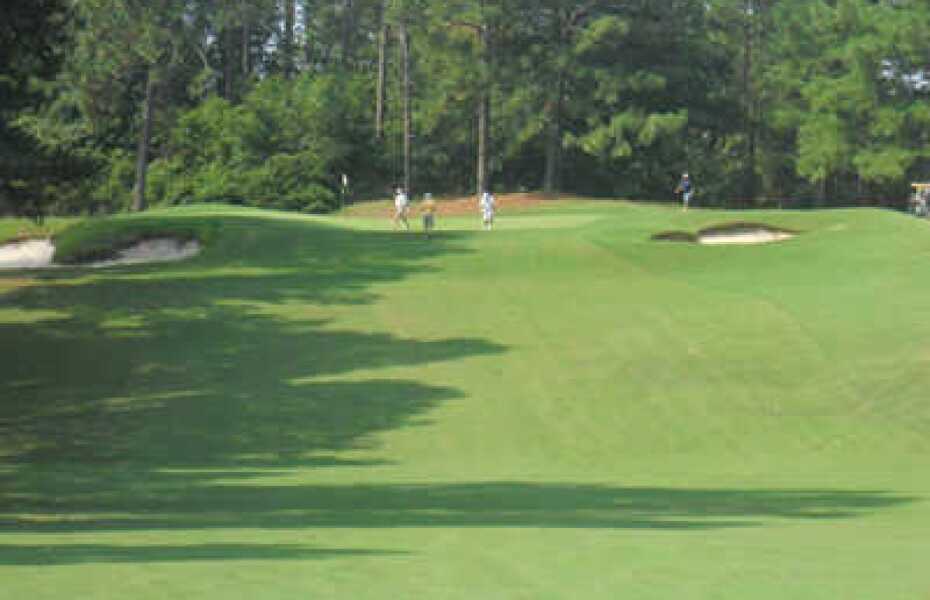