University Ridge Golf Course is just 15 minutes from the University of Wisconsin campus and downtown Madison. The course's name comes from the defining feature of the landscape, a remnant of the last retreating glacier. The course is perched right where the Wisconsin Glacier stopped, providing the backbone of the ridge that divides the terrain into clusters of hills and valleys. Robert Trent Jones Jr. designed the golf course with distinctly different front and back nines that make it feel like you are playing two courses in one. The front nine plays across grassy meadows, featuring contoured fairways and generous landing areas. Wind will definitely be a challenge on this more open nine. In contrast, mature trees frame most of the holes on the back nine. The golf course finishes with two of its toughest holes: a long par 3 over water and then another long hole, a par 4 that plays uphill.

The 19th Hole is Great For:
19th Hole Scenic Views 14
Drinks 14
Patio Dining 12
Course Challenges Include:
Bunkers 29
Elevation Changes 20
Forced Carries 15
This course/club is great for:
Advanced Golfers 24
A Weekend Splurge 20
Wildlife/ Scenic Views 17
This Course's Location is:
Convenient to the City 21
Worth the Drive 15
In the 'Burbs 8

I was looking for more golf in my golf course, University Ridge delivered

Yesterday, upon reflection on of a recent round at Cog Hill #4, I was telling Melanie that I wish we had booked more TPC type courses on the trip. Tournament ready courses that set up for “good old fashioned golf” rather than necessarily being focused on attempting to accomplish breath taking effect on every hole. Enter University Ridge at the University of Wisconsin.

This course feels, from start to finish, like a tournament course; ready to challenge your golf game at least as much as your shot making. It makes sense because, as it turns out, there is a Champions Tour event there in about two weeks. In fact as we hit our approaches on 17 and 18 we were shooting into grandstand construction projects of somewhat staggering proportions (the guy I was playing with said they were expecting a couple hundred thousand people to attend). In other words, University Ridge was set up to play tournament golf at just about the highest level there is.

Most of the holes are straightforward with all of their challenges made clear. Number two has a few surprises in the second shot landing area if you don’t take a peak down the course before you shoot, but the hole clearly states on the tee box what you must carry to cross the creek that wanders across the fairway.

While there are few surprises here, there’s also not a lot of room for poor golf. Plan on giving up a stroke if you mishit a ball. Having said that though, what you don’t have to worry about - for the most part - is giving up multiple strokes to a middling shot. University Ridge plays very fair, and again, in my estimation is a very good test of your golf game.

Fear not though, there is still some shot making fun to be had out there, as exemplified by the three finishing holes. Big hitters will love the par 5 16th with multiple tee shot options (including, as my playing partner described it, the “pro option” which is straight over the trees with a mid-range iron into the green for an eagle try). Shot makers will take pleasure in firing into a pond-protected postage-stamp of a green from 192 (blues tees) on 17. Course managers will enjoy their options on 18, where following the fairway leads to a lengthy approach, but the safety of flat ground; coming up short attempting to cut the corner can leave you firing from thick rough in a series of grass bunkers.

You don’t have to be a monster off the tee to have a good round here. I shot an 89 from the blues using a 6 iron (averaging about 185-190) from the tee pretty much all day (largely due to the fact that my 5 iron broke yesterday and I was playing with a 2nd degree oblique strain which left my woods stranded in my bag). I was forced to lay up on #2 rather than clear the creek (but another 6 iron put me within 100 yards, so I didn’t feel compromised by this), but other than that I really didn’t feel that there were any holes I couldn’t play at least to a bogey. I could have played much better, but I had arguably the worst putting day of my entire trip and was generally average at best around the green.

On the topic of bunkers, University Ridge does one of the better jobs I have seen of keeping their bunkers very purposeful while simultaneously contributing significantly to the visual appeal of the course. Maintenance on the bunkers was almost flawless, as was the case with pretty much all of the course. I’m struggling to think of any component of the track that was want for attention. Additionally, I’ve played 39 courses in 39 states over the last 39 days, and this was the least “present” grounds crew I have experienced… pretty good for a course in such fantastic condition.

The pace of play was great; we played as a twosome, with a foursome playing behind us that was only about two holes back by the end (and actually caught us briefly on 12). We finished in three and a half hours. All of the groups that we saw coming in as we ate lunch after the round were one after the other, so the pace was clearly maintained throughout the morning.

With Cog Hill fresh on my mind, University Ridge was exactly what I was looking for, if you are looking for a test of your golf game that is largely gimmick free, it’s probably for you as well.

Senior Tour will play here in a couple of months, Big Ten Tournament sooner. Greens aerated in October still are not sanded smooth. Putting on a surface where some aeration holes are filled and others are not is really not acceptable. It’s really not about my experience because the course needs the grass to grow now, so big events can be held. I’ve played here many times over the years and I know conditions will improve as summer approaches. Today the play should have been free. Totally substandard for early season.

University Ridge is my favorite course in this area. It's will laid out and always in excellent condition.
I do, however, often find the check in people cold and unfriendly. As far as amenities go, today I wanted to get lunch at the turn and was informed my only option was a hot dog or brat. There were a lot of people on the course and I don't understand why the kitchen couldn't have offered a wider selection.

The course was set up to be very difficult the day we played. Greens were extremely fast and very difficult to read. Roughs were approximately 4 inches deep making it difficult to locate balls not on the fairway. Having worked at a golf course it looked as if the staff rushed to complete the mowing as the lines were made as if the mower was drunk or on a cell phone. I'd much rather play 2 courses for $50 than pay $100 ever again for this one. Obviously paying for the name because i've played many courses with much better conditions. Staff was friendly. Clubhouse is beautiful with a great view.

Course is in prime condition, but set up for a PGA Event. By far the fastest greens in Wisconsin, and the rough is the thickest I’ve played in. Very tough to break 90 even if you are a 5 handicap

My first time at University Ridge

University Ridge was the 1st of 4 rounds of our 24-man buddy trip that also included a stop in Lake Geneva. I can say that all of the group was overwhelmed with joy and high praise for U. Ridge when we got done. The one consistency between both 9's is the need for a little course knowledge so being a first-timer I had to make some educated guesses. The front 9 is open and has more of a prairie feel with a few native grass areas that are in play off the tee. My favorite was the back 9 that winds through wooded areas and has a good blend of risk/reward to it. I can't rate this course high enough on my list of Wisconsin public golf courses and the amenities were also 2nd to none with a spacious practice area and a large clubhouse. Kudos also to the staff who was very welcoming and friendly to our group.

One of the Better Collegiate Public Golf Courses

University Ridge offers a great challenge, impeccable conditions, and a fair price. It's easy to see why it's the pride of Wisconsin college golf courses.

From the carpet-like fairways and smooth greens to the well-maintained bunkers, tees and rough, URGC raises the bar on course conditions. It was a joy to play on and the weather on this day was perfect.

The design offers a variety of holes and shots, making the course a fair challenge and really encourages you back to improve on your missed opportunities. It's not overly flashy or gimmicky, just a straightforward and well-executed RTJ Jr. design.

The price reflects the course and its conditions but is far from overpriced. If I lived in the area this is a course I would treat myself to at least once or twice every year.

One of Wisconsin's Best!

Wisconsin has some of the best public courses in the country. Everyone talks about many of the big name courses, and they often overlook University Ridge near Madison, which belongs with the other courses in the pantheon of Wisconsin Golf.

University Ridge is home to the Wisconsin Badgers golf team, and also hosts an annual Champions Tour event. The course is challenging and presents great variety over the 18 holes. The front 9 is a bit more open with native areas and marshes as the main defenses. The back 9 weaves it's way through a wooded area and is absolutely stunning.

As host to a Big 10 golf team and a Champions Tour event, you'd expect the conditions at University Ridge to be perfect, and they really are. Unfortunately for our group, the greens had been punched in the last 2 weeks, so they weren't as fast as I was expecting but they still rolled true. When I played here in 2017, the greens were some of the fastest and best I'd ever played. I suspect that is the normal condition.

The fairways play firm with good roll-out. The rough is fair, but thick, meaning it's not easy to play from, and the sand in the bunkers has great consistency, and the perfect depth.

Every golfer I've asked about University Ridge has a favorite 9 holes, given that they are so different. I definitely prefer the wooded back 9 to the more open front 9. I just like how the trees frame-up the holes.

University Ridge is an incredible value compared to many of the other top courses in Wisconsin. It's fun and challenging, and I can't recommend it enough!

My favorite hole is #10, which is a downhill par 4 that is just so pretty. It's also really difficult, but fair. 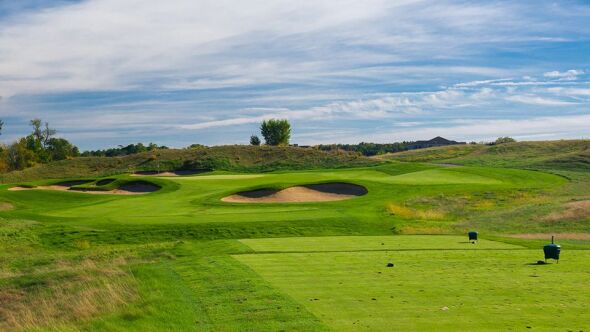 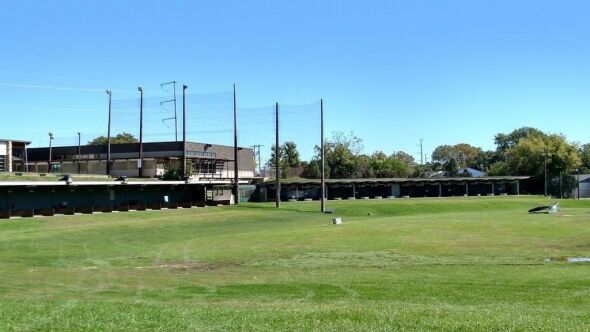 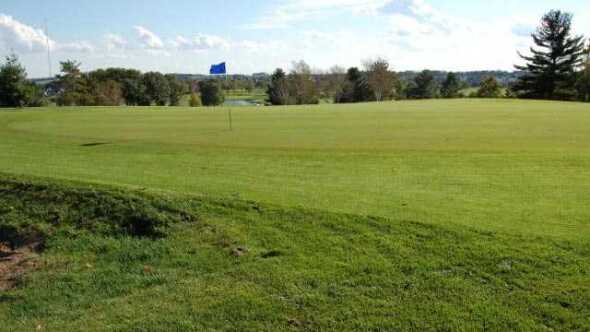 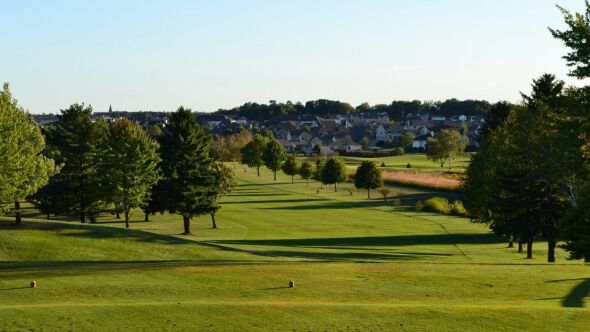 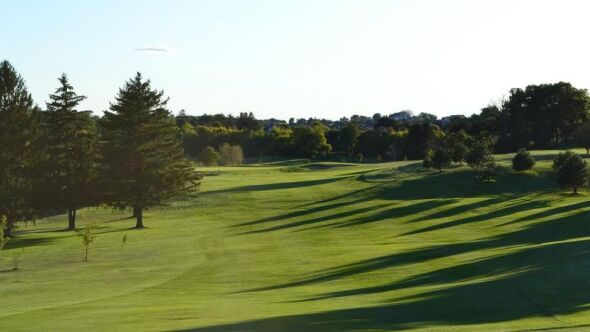 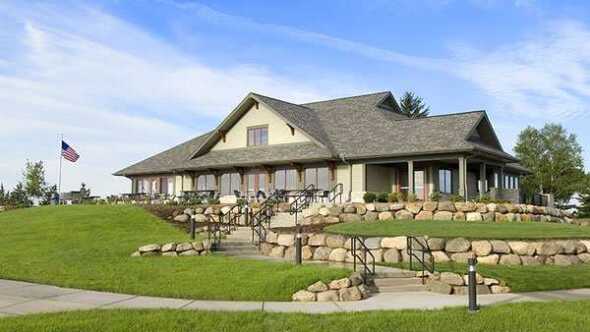 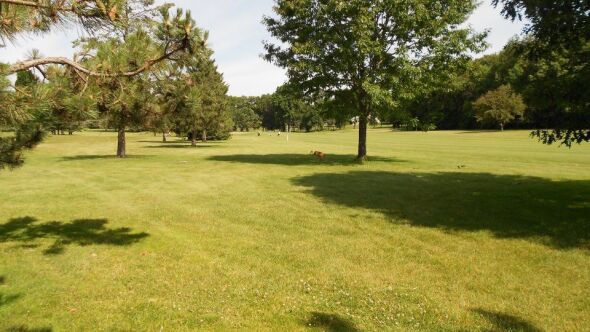 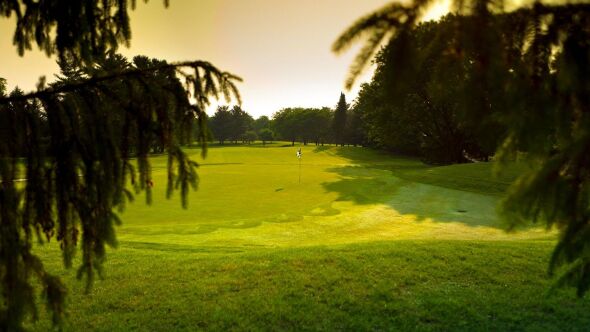 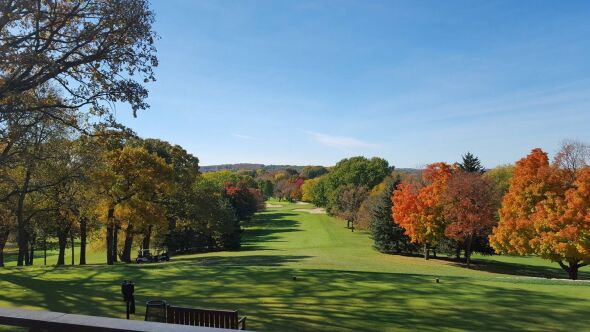 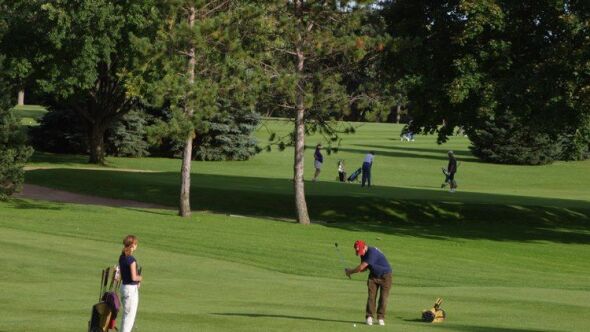 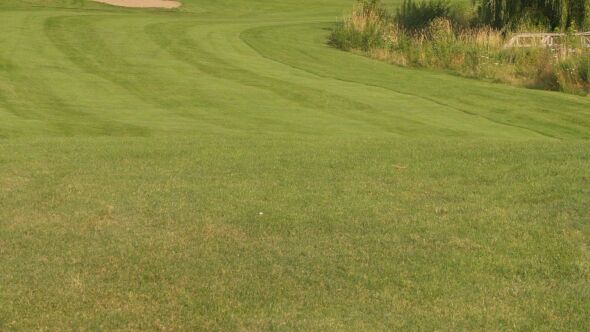 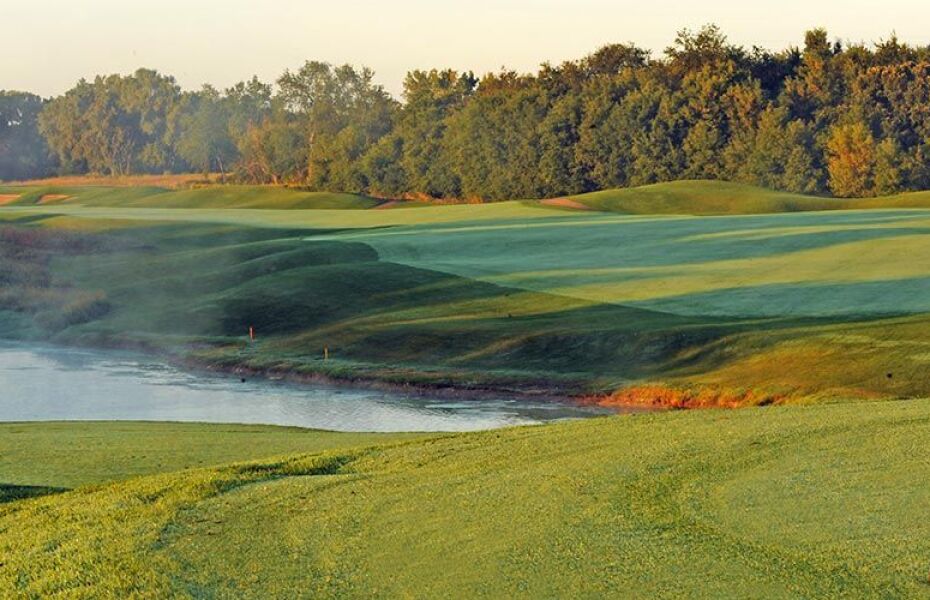 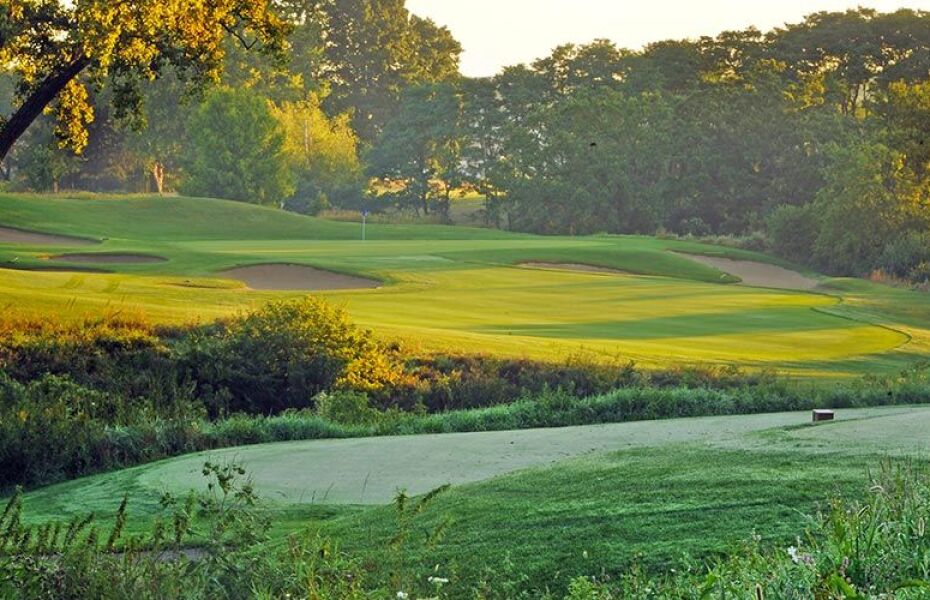 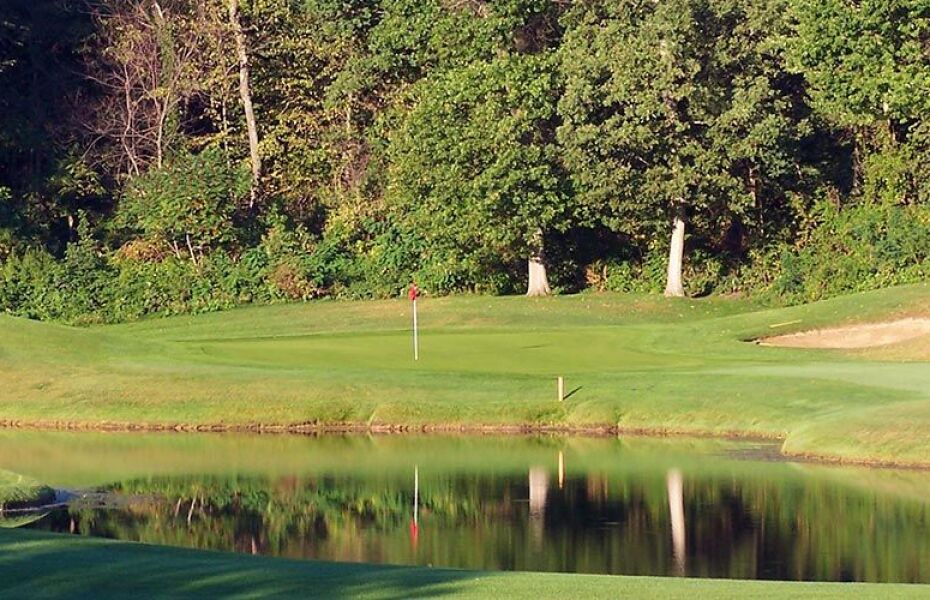 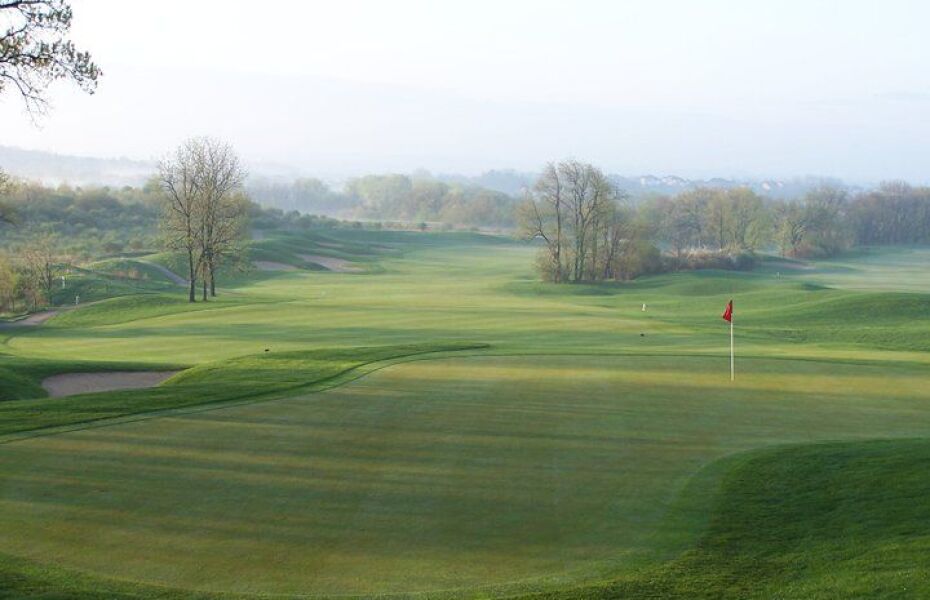 A view of the 9th green at University Ridge Golf Course 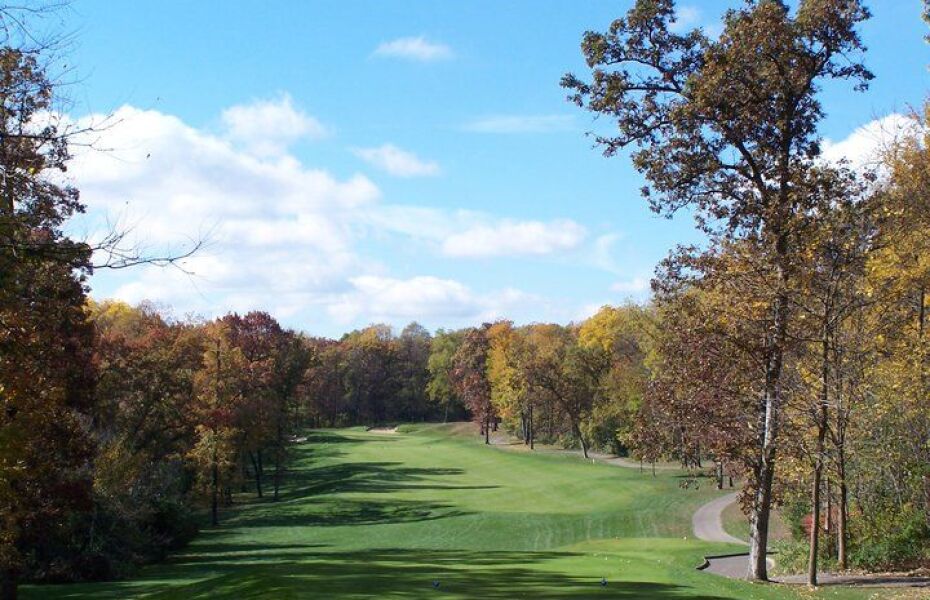 A view of hole #10 at University Ridge Golf Course, home of the University of Wisconsin. 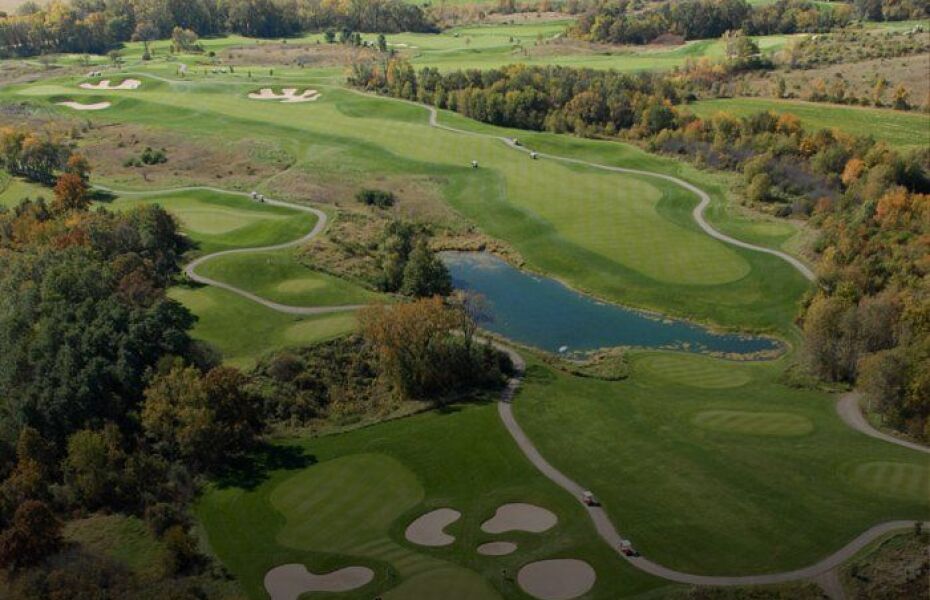