Venture beyond the tourist core and you'll be rewarded with lighter crowds, locally-loved courses and some unexpected history.

Disney World. Universal Studios. Theme parks. Water parks. Chain restaurants. Nightmarish traffic. These often come to mind when people think of Orlando. But there's much more to the hub of Central Florida than crowds, gift shops and toll roads, especially for golfers willing to get out of town a bit.

If this approach sounds appealing but you don't want to burn precious hours fighting traffic, you might prefer to approach one of these courses as a day-trip destination within a more centrally-based Orlando golf vacation. That will add some nice contrast to the trip.

Given how tourist-oriented Orlando seems, trekking out to these golf courses is a rewarding endeavor for a couple reasons. First, it give you a better feel for the less touristy areas. Second, if you're willing to sacrifice some convenience when it comes to location, you'll find more value. Yet none of these facilities are more than an hour from Orlando International Airport (MCO).

North and west of Orlando

This family-owned resort is a popular stop for buddies trips because of its affordable accommodations, friendly service, quality dining options and a range of on-site activities that include fishing, trap and skeet shooting and tennis to go along with its 36 holes of golf. One of those courses, El Campeon, dates to 1917, making it one of the oldest layouts in Florida. Its surprising elevation changes throughout the round tend to remind northern visitors of home: a pleasant surprise, and one that brings golfers back to the resort for regular visits. The more recent Las Colinas layout provides another option.

The family-owned surrounding resort is a nice option for golfers wanting to get away from the busy scene of Orlando and stay away for a few days. It is a particularly strong option for buddy groups. Room rates are reasonable, packages are plentiful and the resort compensates for its remote location by offering a particularly comprehensive array of dining options for its size. The resort is particularly popular for its high-quality buffet services every weekend. On Saturdays, Nickers - the restaurant attached to the golf clubhouse - hosts a seafood, sushi and prime rib buffet where reservations can be a tough ticket. Likewise with their Sunday brunch at La Hacienda, back at the main resort complex. Not only do resort guests take advantage, but locals and folks from several miles away will regularly make the trip out for the occasion. 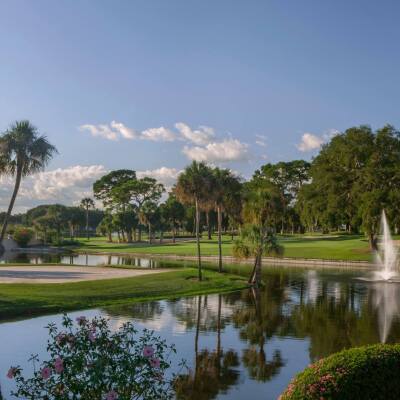 About 20 minutes northeast of Mission Inn, Mount Dora is one of Florida's most thorough golf throwbacks. Relatively unchanged since it was routed across just 88 acres in the late 1940s for returning World War II veterans, it is an example of how old-school quirky golf with intimate confines and small greens can be as charming as the manicured courses costing multiples more to play. Plus, the elevation change across the eastern half of the course - as much as 60 feet on several holes - makes it an interesting experience. Rates barely crack $30, including cart.

North and east of Orlando

Located just into Volusia County, Deltona is almost exactly 30 miles from both Orlando and Daytona Beach, making it a potential option for trips based in either destination. Built originally in the 1960s, the course underwent a substantial renovation in 2008 courtesy of architect Bobby Weed, who gave it a distinctive look and added considerable fun to the layout. Hills, rugged bunkers and undulating greens define the design. With green fees that top out at less than $50 at peak, Deltona is one of the best value plays in the state.

Architect Ron Garl has laid out several courses in Florida, and Victoria Hills is regarded as his strongest public-access design in the state. Characterized by some significant elevation changes and expansive bunkering, some recent reviews cite a bit of a decline in conditions. Be sure to check in about conditions if you're considering a round there in the coming months. Top green fees of under $50 make it a solid value if things turn around.

South and west of Orlando

Lakeland-based Steve Smyers has designed several notable courses in Florida, and Southern Dunes sees him channeling the style of the great courses of Australia, including Royal Melbourne. Large, artistic bunkers guard attractive and undulating greens, including a few that slope predominantly from front to back. Early on in the course's history, it was owned in part by vaunted Las Vegas gamblers Dewey Tomko, Doyle Brunson and Jack Binion. Fittingly, there are plenty of risk-reward opportunities that players will confront during a round.

Visitors to this 2007 Mike Dasher design appreciate the roomy fairways and overall moderate challenge presented by the course. Recent reviews suggest it's on the upswing after some years of uneven conditioning, making it worth its green fees, which max out just under $90 in the prime winter season.

South and east of Orlando

Harmony is a master-planned town that has been developing since 2003. Its golf course, a Johnny Miller design, opened a year later and was one of the longest courses in the state at over 7,400 yards. It was an archetypal pre-Recession golf course: big and challenging. The last decade-plus has seen the course through its share of ups and downs, until a renovation project a couple years ago reduced the square-footage of the bunkering considerably, helping make maintenance more manageable. The increased playability has made the course better for all golfers.

"The course is in the best shape I've seen it in in a long time," writes one recent reviewer.

The 27 holes at this complex comprise a take on links golf, with pot bunkers and open corridors with plenty of mounding. You'll never forget you're in Florida, but recent golfers seem to be impressed by the conditioning of the course and the value offered by the green fees, which top out around $60.

Our guide to the best courses you can play around Orlando, from top-rated resort golf to hidden local gems.
TripsTravel Tips