The 6 Most American Golf Courses In America 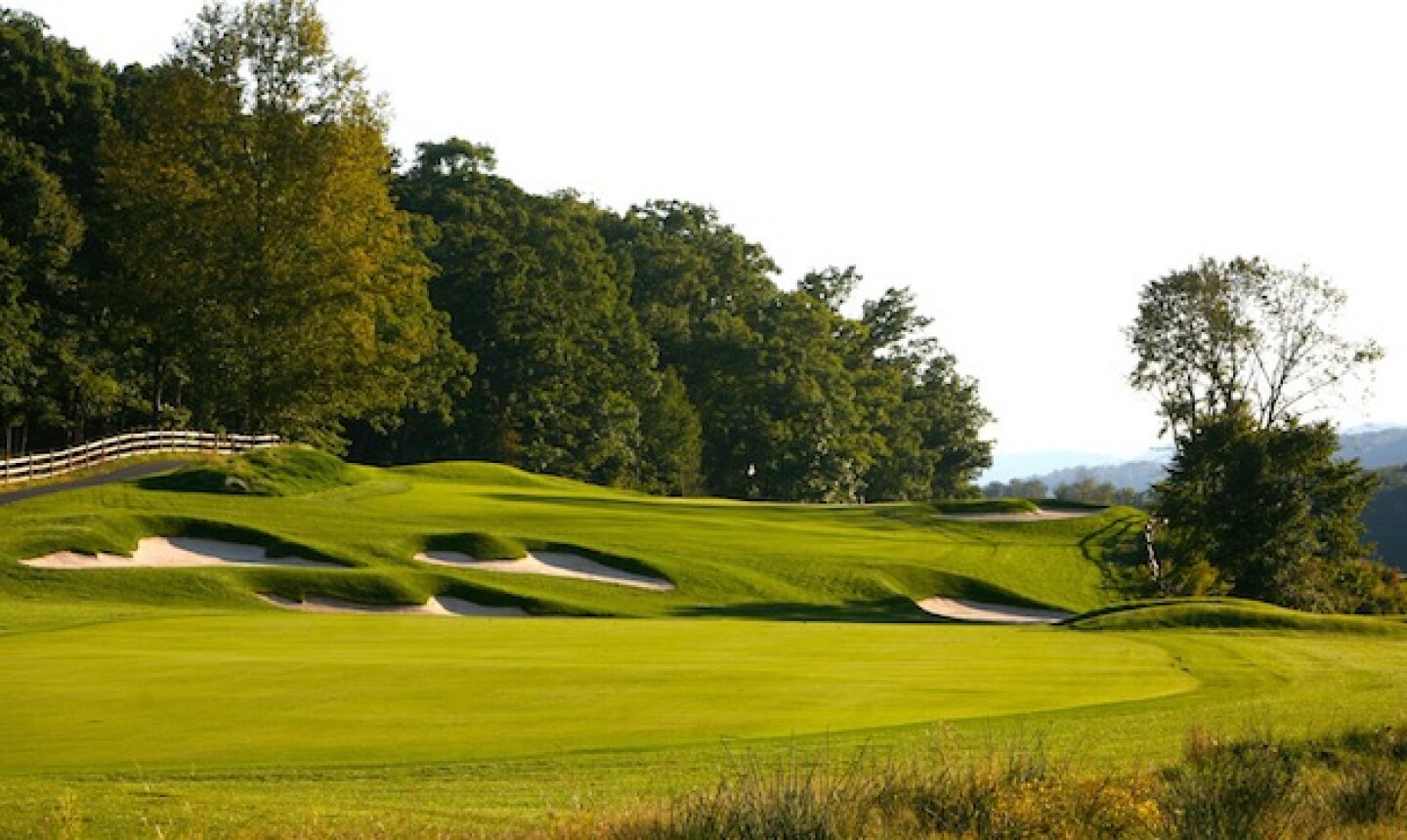 As we head into Independence Day, a quick question for you:

What's as American than freedom, fireworks and apple pie?

Consider this - since 1900, only four American presidents have been non-golfers: Theodore Roosevelt, Herbert Hoover, Harry Truman and Jimmy Carter. Our last three Commanders-in-Chief have been arguably the most avid players since Eisenhower.

Now, our Founding Fathers may not have had the chance to hit the links, but we'd like to think they would approve of the way in which the game tends to treat everyone the same, with hard work being rewarded but the pursuit of improvement never finished...

Clearly the developers of a number of golf courses and resorts have felt this way over the years. As a result, we have a number of one-off courses and large resorts across the country where names, locations and iconography come together to nod to or express a deep connection to America and American history. If you're wanting to feel that surge of American pride while you stride to the first tee, here are seven courses and resorts that come highly recommended:

Since the Dallas Cowboys fancy themselves "America's Team" in the NFL, this list cannot be complete without us mentioning their namesake golf course. And even if you're not a fan of the team, we recommend a visit should you find yourself in Dallas. The Jeff Brauer-designed course is open to the public, and this being an extension of the flash of "Jerry World," one does not so much pay a green fee as play the course as part of a "VIP Package," which includes the day's golf, cart fee, range balls, as well as food and non-alcoholic beverage service.

Located about a half hour north of DFW Airport is Old American Golf Club. That name reflects a somewhat quirky but nonetheless charming embrace of Americana on the part of the club's founders and designers Tripp Davis and Justin Leonard. Davis and Leonard, for their part, patterned the 18 holes after the work of such American "Golden Age" golf course architects as A.W. Tillinghast, Seth Raynor, Donald Ross and Perry Maxwell. The result is a course ranked fifth among all public courses in the Lone Star State. To accentuate the rustic bent of the course, there is a refurbished livestock barn on the property that was built in Michigan in the 1920s and subsequently relocated to the course. Golfers pass over an iron bridge made in Pennsylvania in 1900 and previously used as a passageway from Texas to Oklahoma, on the front nine. A 48-star American flag hangs in the restaurant. Much like the country where it resides, Old American Golf Club is a patchwork of sorts.

It takes about 20 minutes to drive from the Gettysburg National Military Park battlefield site to this Lindsay Ervin-designed course, or about ten recitals of the Gettysburg address. The course itself is a good one - garnering 4 1/2 stars on Golf Digest's "Places to Play" list, but we wouldn't recommend you schedule a trip to see it. That said, it is a nice addition to any tour of Civil War battlefield sites, a summer activity we recommend. The par-5 18th hole is memorable, with its green backed by a large red rock ledge, with the clubhouse perched up above.

As far as American resorts with golf go, The Greenbrier, host to this week's PGA Tour event, wins our compliments as being the "most American golf resort in America," less for its three golf courses than for what lies beneath its stately Old White Hotel. There, an underground bunker meant to house the U.S. government in the event of nuclear war was built in 1958 and maintained in secret until 1995, when it was decommissioned. Tours of the "Bunker," as its called, are available to Greenbrier guests and the general public.

Bedford Springs dates to 1796, when Dr. John Anderson purchased the property after learning of the healing and calming powers of the nearby natural springs. But its major role in American history is as a host of numerous presidents. James Polk began the tradition in 1848, and the likes of Taylor, Buchanan, Taft, Harding and Eisenhower continued it into the 20th century. The later visitors among them, particularly the golf-mad Taft and Eisenhower, had the opportunity to play the course, which Spencer Oldham laid out in 1895 and over whose design both A.W. Tillinghast and Donald Ross exerted heavy influence.

This resort - one of our favorites for striking a balance between excellent golf and accommodations - has the name to be on this list, but it also has a thoroughly American origin story. The early American Club served as a lodging for new immigrants who had come to America to work for the burgeoning Kohler company, which for decades has made some of the finest home fixtures money can buy. Kohler - company, town, destination - in many ways represents the realized American Dream. Where better to play golf and appreciate one of the sources of America's greatness?

Another resort that comes to mind is The Balsams, located in Dixville Notch, New Hampshire, where the nearby townspeople have the distinction of being the first to cast in-person ballots in presidential primary and election years. However, the resort is currently closed and reportedly awaiting more than $140 million in renovations which are set to begin this fall. If and when the Balsams reopens, it will belong on this list as well.

Finally, in honor of Independence Day, we'd be remiss not to mention Independence Golf Club, a public course on the outskirts of Richmond. Independence was originally designed by Tom Fazio, but in 2014 Lester George and his design team completed a significant renovation project that breathed new life into the layout, which had been criticized for being unfriendly to the higher-handicap, senior and female player. Now, Independence is a little less heavily bunkered and its greens are more open in front, which gives all visitors a little bit fairer shot. Best of all, green fees peak at only $70 on weekends. And for younger or beginning golfers, there's a nine-hole par three course on property. The name is really the whole connection here, but the facility's approach is noteworthy and a good model for future public golf development in the U.S.

Have any other suggestions for extra-American golf courses and resorts? Let us know in the comments!

Island Retreat
Take a big step back in history and play on Mackinac Island, just off Michigan's golf gem Upper Peninsula. A War of 1812 battle was fought near the site of Wawashkamo Golf Club, which opened in 1898. A fort from that era overlooking the island and the magnificent Grand Hotel is close to The Jewell, a slick 18-hole course that includes a horse-and-carriage ride to and from the back nine that is barely 20 years old and designed by highly acclaimed Jerry Matthews, who renovated a front nine that opened in 1907.

I agree with one other comment.
Need to know your audience.
Need Pricing and consider seniors that are not and never have been CEO's.
Come back to the real golfers??
Have a good day and hittum somewhere..

Any list of most American golf courses should include Leather Stocking at Cooperstown New York. James Fenimore Cooper's novel the Deerslayer takes place in the area with descriptions of locale that can be recognized today. The porch of the Otesaga Hotel affords a view on the golf course, which includes the place of the climax of the book. Cooper's description of the place where Hawkeye is rescued from being burned at the stake by the Huron Indians is clearly the 17th green today.

to continue J&amp;J's comments on FDR wanting "to put golf clubs in all citizens hands", check the opening date of your local muni anywhere in the United States and the odds are that it was built by the WPA during FDR's administration. People know about his make work projects to help get us out of the Great Depression but few know that building golf courses for the public was a large part of that.

The Progressive Democrat forgets to state the obvious reason for the disappearing middle class: The policies of the current administration that he helped put in office. Twice. I have no pity on his golf frustrations.

The five courses that comprise Bethpage State Park were commissioned by golfing (pre-polio) NY'er FDR as part of what he called a "people's country club" that even included a polo field! 1930's socialism aside, you can't argue with a prez who wanted to put golf clubs in all citizens' hands. I played the Tillinghast-designed Black Course, the first daily-fee course to host a U.S. Open. God bless America!

Pelican north and south courses in Newport Beach.
Incredible incredible ...
Hills mountains scenery all challenges you could ever want.
It's a must on your golf bucket list.

The Omni Homestead Resort's Old Course was completed in 1892 and is distinguished as home of the nation's oldest first tee in continuous use. It had the first round of golf played by a sitting US President as well as purportedly the most rounds of presidential golf (over 20 have played).
The Homestead, in Hot Springs, VA was opened in 1766 with land granted to the owner from George Washington and the ‘Hot Springs’ were frequented by Thomas Jefferson.
Beyond the deep presidential heritage, the yardage is 6, 667 from the tips, a course/slope ratings of 73.0/137, hilly terrain with phenomenal vistas, it’s great golf with great views!

How about Plainfield CC in Edison, NJ? That's where the battle of Short Hills was fought during the revolutionary war.