These reviews are a bit inflated from other golfers. Its honestly just another me too out on the strand. Its more of a tier B style course (e.g. tier 1 is Heritage, Glen Dornoch, True Blue, etc.). Grounds are good but not great. I would pass on this course even with my 4 start review. I think theres better in central Myrtle for the costs.

The course is in great shape and the staff very friendly. The layout is tight, but if you play from the correct tee box you will enjoy your round. I only lost 2 balls playing from the white tees. If I had played from the blue tees the round would not have been so much fun. :)

Course in good shape. Many holes placement golf tee shots with no let up in easiness. Played cypress which is difficult and lakes which is a little easier. Worth a try.

Cypress nine is the toughest of the three nine at Arrowhead. Target golf is important to avoid the water hazards that come into play on most holes. It’s hole water all the way down the right, 2nd par 5 water protecting the front of the green, 3rd challenging Par 3 over water. 4th dogleg over water, then across water to the green. I think you get the idea.
Course is always well maintain and in good condition.

Challenging layout that was fun to play. Got to hit different clubs off the tee.

Played here years ago and didn’t particularly like it but this time was great. I would definitely play again.

Played Arrowhead yesterday and it is a good solid course. Very much a country club type course. Relatively tight fairways and many doglegs. There is a lot of water in play. Most of it is on the side. There aren’t a lot of forced carries. But there is a lot of it around and in play. The typical hole is a dogleg one way or the other with the hole being framed on one side by water and the other by trees. The course is in good shape. Over seeded and bright green. I wasn’t a huge fan of the greens. They rolled pretty quick but they just seemed kinda grainy to me. Other than that it is a great challenging course.

Completely rushed and reprimanded by the ranger when playing at a normal pace on the front 9. It’s an old boys club that certainly doesn’t welcome women. Would highly recommend staying away from this place if you want to enjoy your time. Or if you’re a bunch of rude bros looking to hang out with an 85 year old ranger past his prime, this may be the right place for you.

Arrowhead is close to the airport for those guys flying in and out of Myrtle. It has lots of water and doglegs so you had better hit it straight. Overall, a good challenge.z

Greens were in great shape and moderately fast. Course is tighter than others in the area.. Pay attention to the layout of water hazards which can go unnoticed on approach shots.

so we do a trip every year to myrtle in oct and have been for quite sometime. my group ranges from 16-28 pending schedules and never had any issues booking or dealing with courses there. almost all experiences have been a positive, mostly. some of our group like to play an extra round on arrival day so we book something seperate, usually 10-12 of us. well this year we picked arrowhead, heard the course has been in great shape . called down and spoke with the assistant pro Tyler who i guess i was bugging, maybe asked 1-2 questions to help clarify something but what poor customer service. major league attitude, rude and not helpful at all. sounded like i was a huge inconvience at the time i called. this is one course i will be avoiding and will not get my business.

not shocked when I hear that every year several courses are closing.

It's best to be arrow-straight at Arrowhead

Some golf courses just refuse to be overpowered. Arrowhead is one of them. It is one of the narrower tests off the tee in the Myrtle Beach area, with dense forest and white-staked real estate bordering many of the holes. Water hazards also pinch things in at times. Placement is far more important than distance. At times, the demands can make a golfer feel shackled.

If you're game for some defensive, tactical golf, though, you'll be rewarded at Arrowhead, as the greens don't have too much movement. They are also some of the best-kept sufraces in the region, and that standard of maintenance extends to the rest of the course. If great greens make you salivate, you'll have little problem looking past Arrowhead's design drawbacks and have a good time.

3 Nines to choose from at Arrowhead

And each one of them is a gem. This facility is top notch. A bunch of courses got hit hard this winter and are in bad shape, yet still charge premium prices. This place is in fantastic shape tee to green and is moderately priced for down here. Lots of eye candy with plenty of water and shot making holes. Definitely recommended.

This was our second annual trip to MB and the 16th course played and by far the best, maybe the best i've ever played anywhere. Not a detail was left behind. From the tee-boxes, to fairways, to the greens all lush. Even the grass at the driving range was lush! We are making a special trip in a few weeks and the main reason is to play this course again!

Not only was the course in perfect condition but we happened to pick the day to play during the Myrtle Beach Airshow. I brought out a group of 24 and everyone wanted to go back the next day. During the back nine, pace slowed way down as the Blue Angles were flying just over the trees for the entire round! It actually got tough to putt not knowing if you were going to get buzzed.

There were a couple of greens that have the algae problem from the harsh winter but found over my five days they were the best (only played best courses on the grand strand). If the only complaint I heard was they were out of onions at the condiment bar at 5 pm they must be doing something right.

Staff was amazing! This was my 8th time playing as we don't play the same courses every year but have a feeling it will be from now on. Most of the group was so impressed they played the 3rd nine (Lakes) and said that was even better than the other two. Thanks again and see you next year.

Course is harder than you would expect. Need to play a few times as it has a lot of hidden hazards. Overall an enjoyable course along the waterway .

Still a Must Play

Still a MB must play venue, the faciliy and course were in very nice condition andwell worth consideration for play.

Play all 27 holes, every year, are group comes to Myrtle. Range excellent, short game area, nice putting green. Staff friendly, food is good too. The three nines, were in good shape, even for the bad winter in that area. Courses are challenging, but fair. The layout of the courses, are outstanding.

*This review is only for the Cypress 9*

Ok, here's the news. Came here to knock out a quick 9 as a twosome with a raincheck. The spring break season is in full effect, but usually we can still get out on courses down here without getting paired up and that's what they let us do when we showed up. Awesome, right? Well, no. In fact, it turned out to be downright miserable due to the fact they let some golf academy come here and play every Monday or Tuesday. That's fine, but they could at least let others know that's what's happening so they can play somewhere else and come back another day instead of just trying to make money. Be upfront and honest and you'll get returning customers. Trying to sell out your course without telling people what to expect is bush league...punch your greens? Let me know, I'll come back later. Leagues? Let me know, I'll come back another day.

Basically, we sat for over 10 minutes waiting to tee off because the jokers in front of us thought they could drive the green, when in fact they hit into the woods, hit 2 balls, etc. Watched this nonsense from behind the first tee, turned around to try to get out on another one of the 2 9s, but both were just as packed so we went back to the tee box and figured we'd easily play through.

That never happened, as these guys knew nothing about course etiquette or pace of play. Took 20 mins to play the first hole, waited again on the 2nd tee so long I had to call the pro shop to have a ranger sent out. The guy working was completely indifferent to helping me out. He finally reluctantly said he'd send a ranger, but never did. Took about 2 hours and 40 minutes to play 9 holes, which is outrageous. Most courses don't put up with that garbage - 4 hours 15 mins to 4h 30 is the normal time you're expected to finish in (and even that is too long for a round). I told this to a different guy in the pro shop after we finished and he didn't care anymore than the guy I talked to on the phone. Management needs to take a cue from other courses on how long rounds take and how to treat customers. Even if they do, I won't be coming back to play here, especially with the abundance of other fine courses here.

The overall experience is only deserving of 1 star, but because it was in pretty nice shape and the greens were rolling pretty true, and because it's a pretty nice layout, I have to give it one more to be fair. 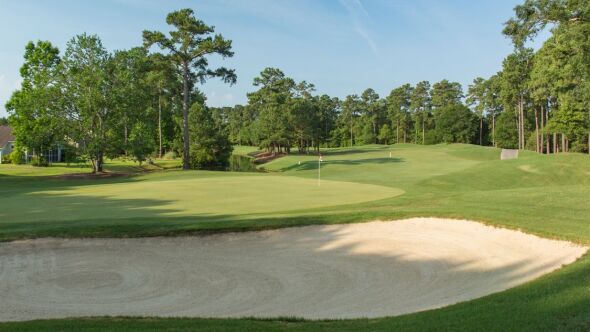 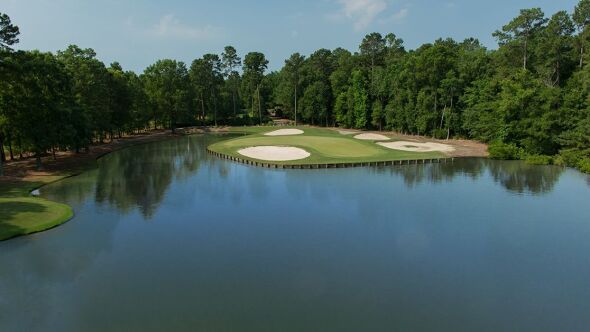 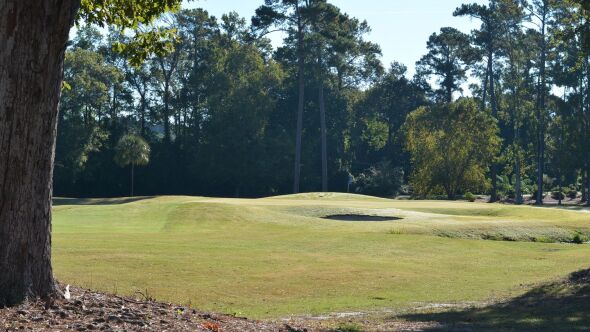 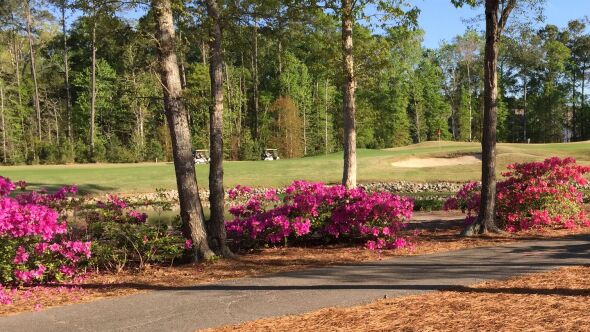 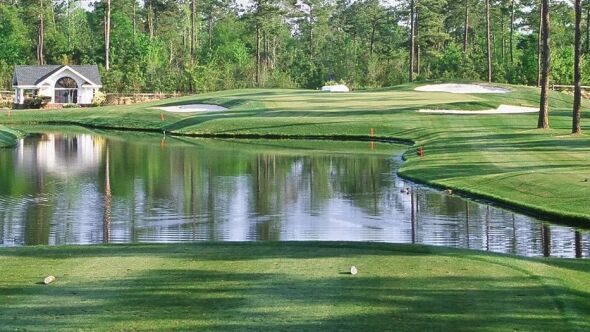 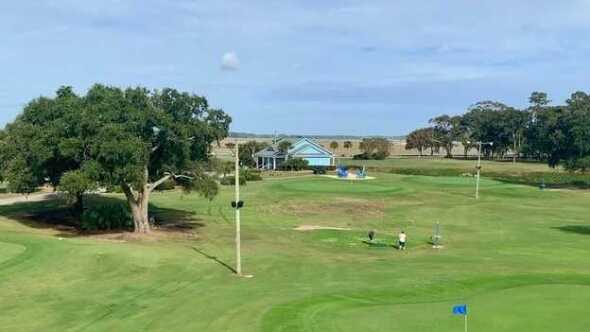 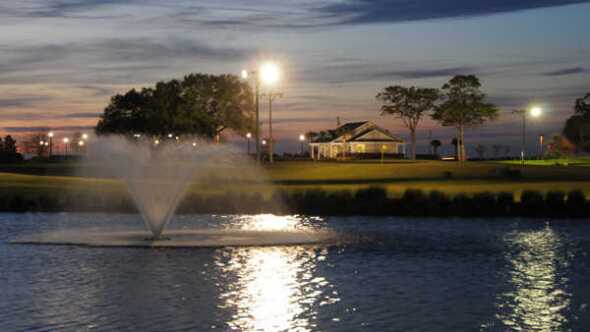 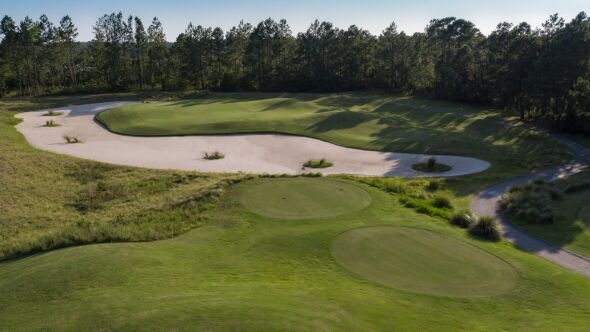 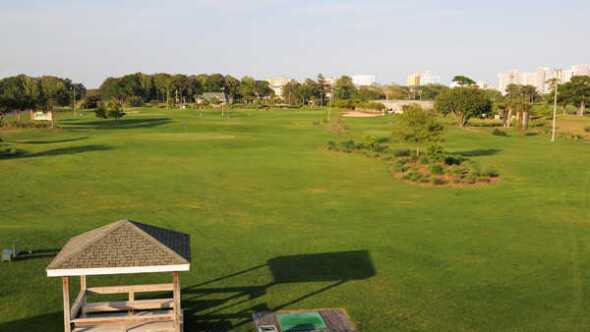 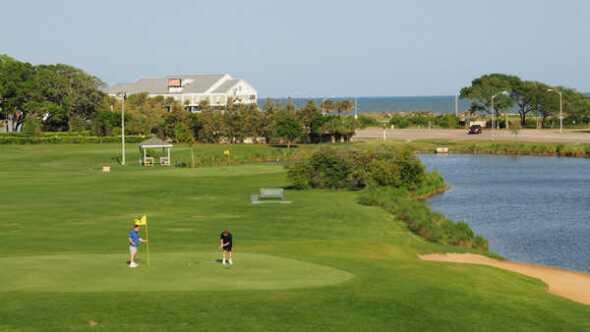 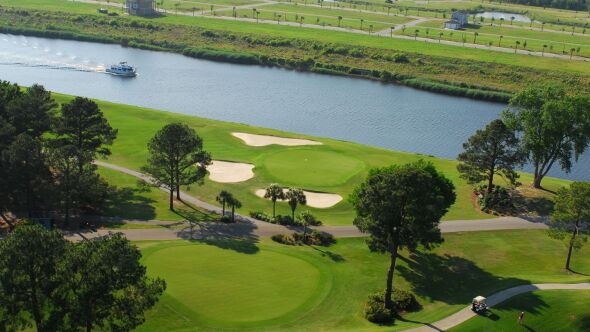 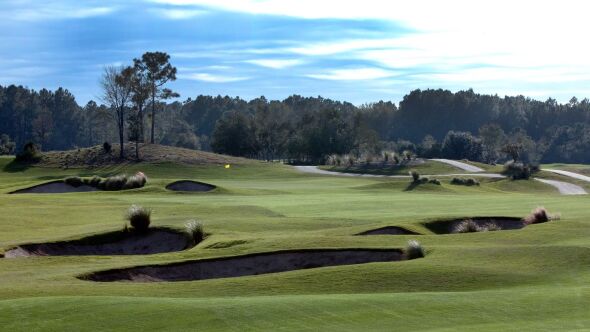 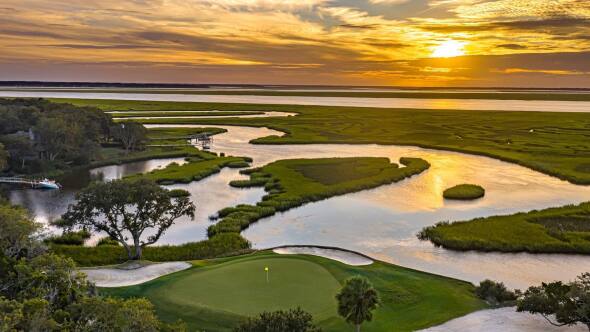 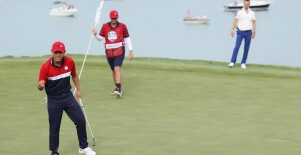 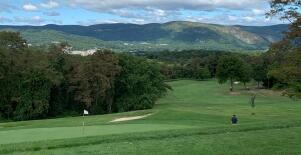 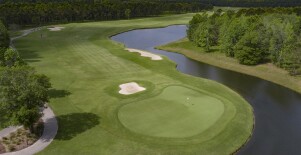 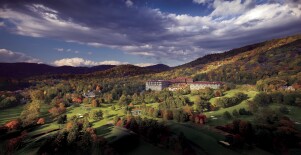 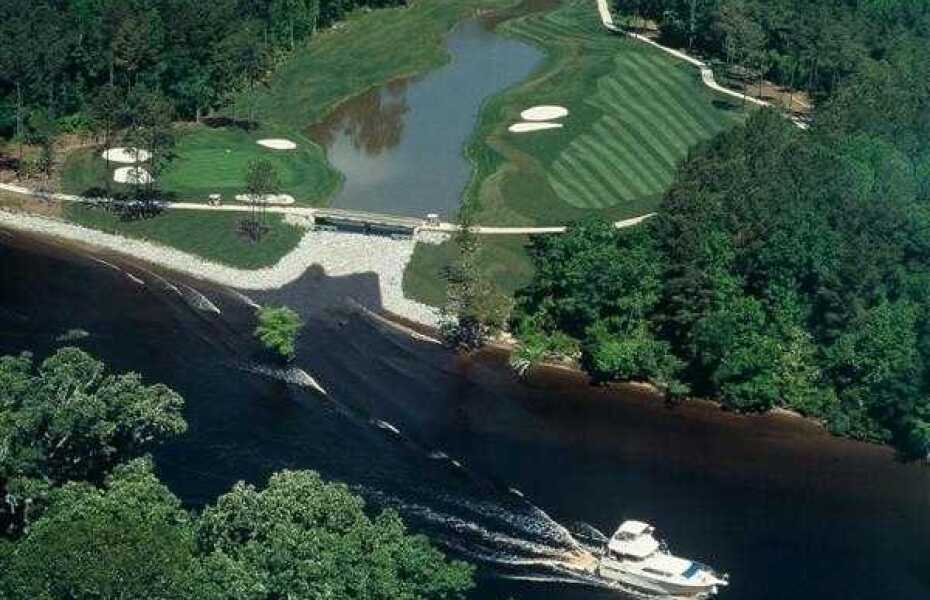 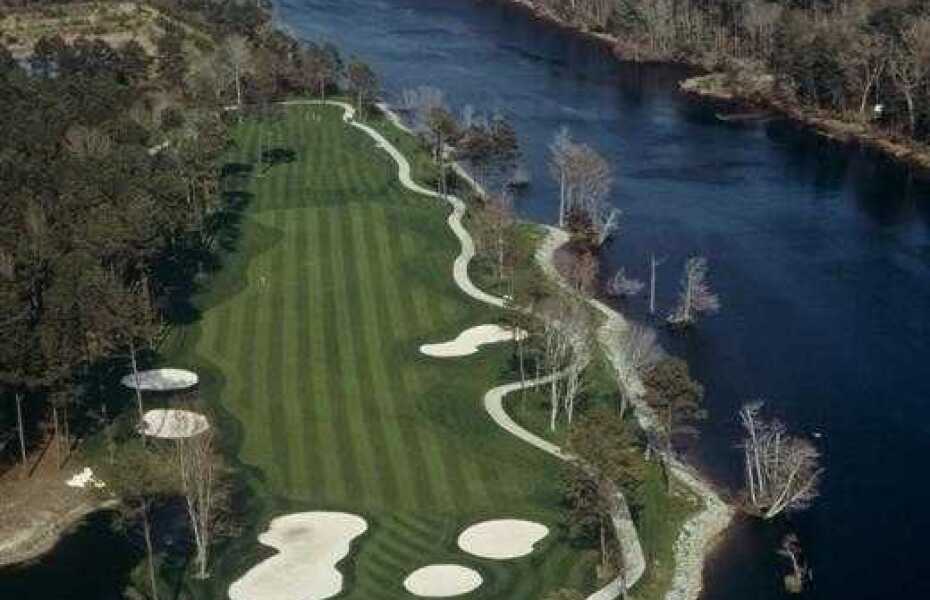 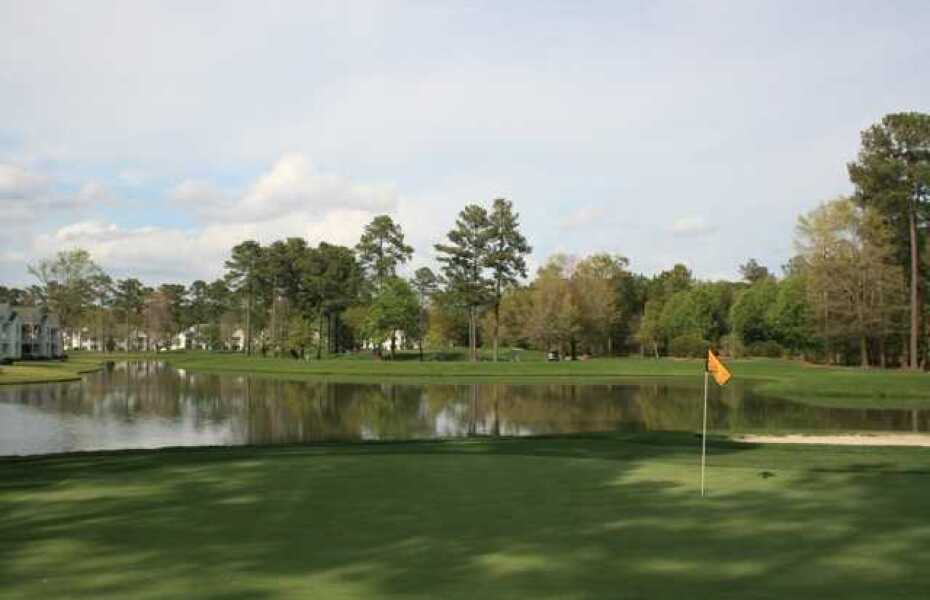