Some universities are opening brand new courses or enjoying strong rounds played. Others are losing their golf team or course.

2020 has provided few easy decisions to make for American universities in both the classroom and with their athletic departments. The Big Ten and Pac-12 just announced they've suspended their fall sports to much uproar.

2020 was supposed to be a big year for collegiate golf courses. In early March, Golf Advisor Contributor Jay Revell reported on the brand new Florida State University Seminole Legacy Golf Club, a totally new course built on top of the old Don Veller Seminole Golf Course. It was designed by Jack Nicklaus and is a private, ClubCorp facility.

Also in the ACC, Birdwood Golf Club, home course of UVA and part of the Boar's Head Resort, reopened after an extensive renovation by Love Golf Design. (Non-university-affiliated green fees top out at $135 weekends.)

This summer in the Big Ten, Indiana University debuted a brand new course, the Pfau Golf Course at IU. Early reviews of the course have been quite good, including reviews from some of our Indiana and Midwestern Local Golf Advisors. Several years in the making, the golf course project has a reported cost of about $12 million and significantly elevates IU's golf course to a level among the NCAA's elite facilities, including rival Purdue's Birch Boilermaker Complex that was upgraded by Hoosier legend Pete Dye. Pfau green fees are $80-95 for the general public.

Steve Smyers was the architect who oversaw the transformation of the existing golf course. “It’s probably one of the nicer sites that I’ve had the pleasure work on, and I’ve worked around the world," he said. "There’s nothing of the original golf course left today. We totally rerouted the golf course.”

(You can view my interview with Pfau Golf Course architect Steve Smyers in the video above.)

There's another side to college golf facilities in 2020, however, and the Ivy League has felt the brunt of it. Connecticut was one of the 16 states that at some point this spring ordered the suspension of golf course operations as part of its stay-at-home order. Yale Golf Club still hasn't reopened and earlier this summer, reports surfaced of minimal maintenance being performed on the grounds. Yale is regarded as one of the best classic college courses in the country and among architect Seth Raynor's finest works. You don't have to be a Yale alum to show concern. The architecture aficionado community across the country grew aghast at pictures showing turf conditions deteriorating with little indication of how much maintenance was being performed.

Yale posted a projected opening date in August but that has since been pushed back to August 31st, according to the course website and local reports. Meanwhile, fellow Ivy League institution Darmouth decided to eliminate its golf program and close Hanover Country Club, a historic course that was established in 1899, permanently. New Hampshire was the last state to allow golf courses to reopen (May 8).

One bright side in Ivy golf is Cornell University, which has a notable golf history and on May 24 reopened its course, designed by alumnus Robert Trent Jones Sr.

It appears that universities who have kept their public-access courses open have enjoyed robust revenue.

In Michigan, for example, Eastern Michigan University's Eagle Crest Golf Club was forced to close March 25th by governor's mandate in March. Courses were permitted to reopen April 24th. Management reports that their golf revenue in May was nearly flat YoY despite walking only for the first part of the month and single-rider carts for the second half. By June, Eagle Crest reported tremendous growth in rounds booked (+40% YoY) and golf revenue (+35% YoY) and that continued into July, where rounds (+28%) and golf revenue (+23%) are up significantly.

Eastern Michigan is currently chugging along on a 20-year, $1-million improvement plan. At the time of my visit, they were rerouting the cart path on the par-5 16th hole and three greens have already been rebuilt in recent years.

College golf facilities across the country have received considerable investment in the past two decades. Golfers there should be fortunate, because it appears we're embarking on an era of belt-tightening in higher education. With fall football appearing to be canceled in at least two major conferences, that suddenly opens up 4+ hours on Saturday for other activities. Alumni and students may be swapping tailgating for tee times. 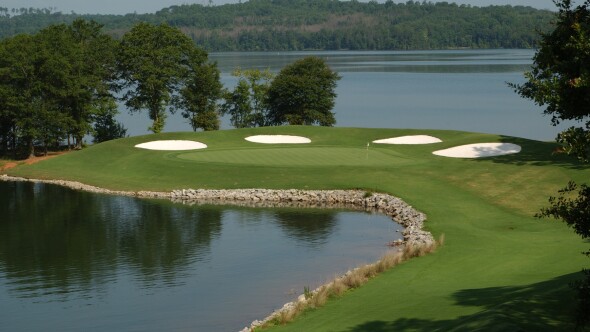 Brandon Tucker
Brandon Tucker is the Sr. Managing Editor for GolfPass and was the founding editor of Golf Advisor in 2014, he was the managing editor for Golf Channel Digital's Courses & Travel. To date, his golf travels have taken him to over two dozen countries and nearly 600 golf courses worldwide. While he's played some of the most prestigious courses in the world, Tucker's favorite way to play the game is on a great muni in under three hours. Follow Brandon on Twitter at @BrandonTucker and on Instagram at @btuck34.
7 Comments

Just played up at Seven Oaks GC at Colgate which is a RTJ Sr. Design. They said they were going to be putting in 8 million to improve the course and clubhouse.but the virus delayed the renovation. The course was in decent shape but gets tons of play when open. I liked the design but there was a stream that meanders throughout the course that ate a few golf balls. If set up properly it offers a solid challenge for tournament golf.
Cornell is open but only to foursomes that are pre booked. As a single I could not get out at this time but I am hoping that changes before the end of the season. It is another RTJ St. layout that hosts the NYSPHSAA Championships every year.
I also had the chance this summer to play the Notre Dame course which was a beautiful Coore/Crenshaw design. It was a little busy but the holes are challenging and the course was in good shape.
Other college courses I have played are Yale, Duke, Winthrop, Grinnel, Karsten Creek and Michigan State with Yale being the best layout in my eyes. Karsten Creek was expensive and I almost got the feeling they did not want me there regardless if I paid or not but it was an excellent course. I tried getting on Stanford but was unsuccessful.
If you want to play at two good high school courses try the Seth Raynor designed Hotchkiss School in Ct near the Mass border or the Glen Mills School outside Philly. Hit em straight........

Tuition is far too high if a university can afford to build a golf course. This is criminal.

One of those, huh? A kid does not pay an extra nickel for athletic amenities such as a golf course. They are maintained by donor contributions and out of the general athletic fund, that a student will pay into as a small fee tacked onto their tuition. No academic endeavors are compromised by large stadiums, arenas....or golf courses. For example, Karsten Creek at Oklahoma State was made possible by the founder of Ping Golf and several other high-dollar donors. Yours is a common argument that is unfounded. Just like "college coaches make too much at the expense of education". The colleges pay coaches about $500K out of general funds, the balance is from athletic funds dedicated to sports and kept going with donations from alums and boosters.

Sadly, further confirmation of where the balance and focus of athletics vs academics in secondary education is in USA...

Sadly, your comment is unfounded and simply not true. Yes, a base amount of funds from the general college fund is attributed to athletics. Recent studies show this to be about 7% of the total athletic budget. The balance is from donors, sponsorships, apparel licensing, television contract payouts and funds obtained from post-season play such as bowl games and basketball tournaments. Despite the uneducated premise that sports flourishes at the expense of academics, the opposite is actually the reality. Putting money into sports teams brings in more money (via the methods noted above) to the general university coffers than any research building addition or faculty addition ever will.

Any article about college golf courses is not complete without mentioning the best course, hands-down, without question, if for no other reason to clarify where the bar is set.

Take a look at the redone US Naval Academy course. The reviews have it as the premier golf course in the state of Maryland, which of course includes Congressional.