Golf Channel turns 25 on January 17th, 2020. Once considered a harebrained idea belonging to Arnold Palmer and business partner Joe Gibbs, it is now the most-watched single-sport television network, and deeply ingrained in sports media culture. Turns out golfers like watching the game when they're not playing it.

The last quarter-century of televised golf coverage has produced some of the most watchable (and re-watchable) moments in the game's history. And even though the adage that pro golfers would play in a parking lot if the money was good holds some truth, the savvy consumer of the game has long been aware that on the best grounds where the best golfers in the world ply their trade, drama - with the occasional moments of spicy controversy - will tend to ensue.

In the past 25 years, TV quality has improved considerably, from HD to 4K. So have the venues themselves. Today's pro schedules and major tournament rotations have more variety on them than ever before.

The Golf Advisor Staff has come up with 25 events in the past 25 years when the golf course itself was just as much of a story as the players. Naturally, major championship venues have been fertile ground for these stories, but courses have made news in smaller or one-off events as well. Here's our overview, in chronological order.

Chime in with your favorite venues in the last 25 years in the comments below! 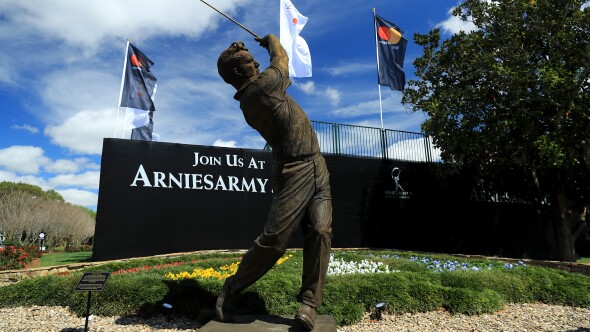 Celebrate with us at Bay Hill!
Join our exclusive GOLF Channel 25th Anniversary Getaway to Orlando in October that includes a stay & play at Arnold Palmer’s Bay Hill Club & Lodge, a VIP tour of GOLF Channel World Headquarters and exclusive access to other premium Orlando courses! Click below to join our interest list now!
RoundupsArchitecture

I will never forget the 1999 Ryder Cup at The Country Club. The 17th hole has a magical history in US Opens and it came through again with Justin Leonard sinking that long putt up the hill.

Really, Merion should be up near the top of this list. Pros and commentators alike criticized the selection of the course for the 2013 Open, saying that current crop of pros would humble the course, due to its comparative short length and “tight” layout. Yet, no one was able to break par for the tournament. Justin Rose won with a +1 score. He was quoted later as saying he may have defeated the other golfers in the field; but he didn’t’t defeat the course. 74.5526 was the average score, which was the highest score since 2007, and the second highest average in the past 20+ years. Surely that great course should be prominently included.

Good addition there, Patrick! This list is definitely not exhaustive.