Once complete, La Costa will host three Division I Men’s and Women’s Golf Championships from 2024-26.

One of America's top golf destinations is set for a huge upgrade. Omni La Costa Resort has announced they have hired golf course architect Gil Hanse to extensively renovate the Champions Course, one of two 18-hole courses at the 400-acre property in Carlsbad, Calif.

The resort also announced that following the completion of the renovation it will host the NCAA Men's and Women's Division I National Championships from 2024-26. The men's and women's tournaments will take place back-to-back.

La Costa is one of the most iconic golf priorities in Southern California with a rich history of tournament golf, most notably hosting the PGA Tour's Tournament of Champions from 1968-1998 before it moved to Maui. It also hosted seven World Golf Championships from 1999-2007. It's one of the public courses that let you walk in the footsteps of Tiger Woods' greatest triumphs.

"Jim Wagner (Hanse's design partner) and I look at the level of precision required to play a golf course - make it wide, playable, make it fun," said Hanse on Golf Channel's Morning Drive (watch the full segment in the video above). "Yet the level of precision to score needs to be a lot higher. And that's what we'll be looking at through a combination of setup options, different tees, different angles, a lot of width and challenging hole locations that we can get that golf course to be set up in any number of ways.

"If we can put that flexibility and that variety into the golf course we'll have a winner."

The 400-acre Omni La Costa originally opened in the 1960s and was designed by Dick Wilson. It received extensive renovations that wrapped up in 2011 following its run as a World Golf Championships host. This latest renovation is scheduled for 2022.

This isn't the first Wilson design that Hanse has been commissioned to modernize. He also updated the Blue Monster at Trump National Doral Miami in 2014. Once complete, it staged a WGC event from 2014-2016 years before the event was moved to Mexico.

"This won't be a pure Dick Wilson restoration. But there will certainly be elements of his work that we'll keep and restore and try to enhance." 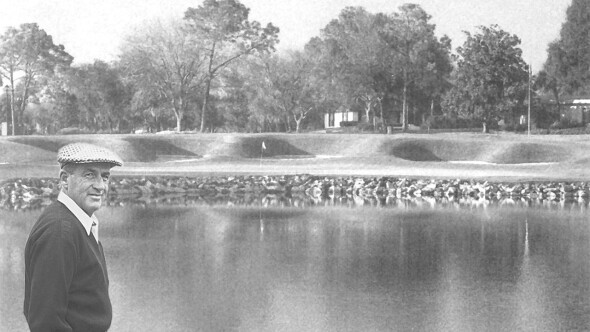 The San Diego golf market has seen a surge of golf course news in recent years. The U.S. Open is slated to return to Torrey Pines South in 2021. The course underwent a major renovation that took up most of 2019. Tom Weiskopf extensively renovated the immensely popular North Course at Torrey Pines, which reopened in 2016. San Diego's municipal courses are in line for an additional $15 million more in upgrades.

Meanwhile, the Park Hyatt Aviara in Carlsbad just wrapped up a $50 million renovation to its resort grounds.

Hanse has performed a handful of new and renovation projects in Southern California. He built the public Rustic Canyon Golf Course in Moorpark with co-designer Geoff Shackelford, and extensively renovated 36-hole Los Angeles Country Club, which is in line for the 2023 U.S. Open. He also renovated Ojai's Soule Park Golf Course. Hanse predicts the yardage of the Champions Course could stretch to 7,500 yards to accommodate the NCAA's best, but precisely what the finished project is remains to be seen.

“It's too soon to say if the characteristics will be more like a George Thomas Los Angeles Country Club, Bel Air or Riviera style or an Alister MacKenzie look, like at Valley Club of Montecito, or something else," said Hanse. "But we're looking forward to 'solving the puzzle' out in the land.”

Three consecutive years in So.Cal.?
Somebody has to help me understand why the NCAA thought this was a good idea!

Looks like a great course, but as CJM implied, I am not a fan of the 3-year commitments for courses. First the 3-year (now 4-year due to COVID) award to Arizona State and now this one. So many goofy things here. ASU just moved into one of the preeminent collegiate golf facilities yet the NCAA tournaments will be at a different course. But this one is even more ridiculous as the host school for the events at La Costa? Texas. Yeah, Texas, some 1300 miles away. Makes absolutely no sense at all. There are so many great collegiate courses that will now be decades between them getting into the mix. Guess the NCAA thinks golf needs to follow the other sports and put championships at professional venues. What next? Take the College World Series' away from Omaha and Oklahoma City? Tradition means absolutely nothing anymore.

While I'm sure the course will be amazing, it's a serious bummer for the college kids who will have to play the same course 3 years in a row if they make the ncaa finals. One of the cool things about college golf are all the different places they get to play. Locking in the tournament at one single spot for a series of consecutive years was not a great idea.