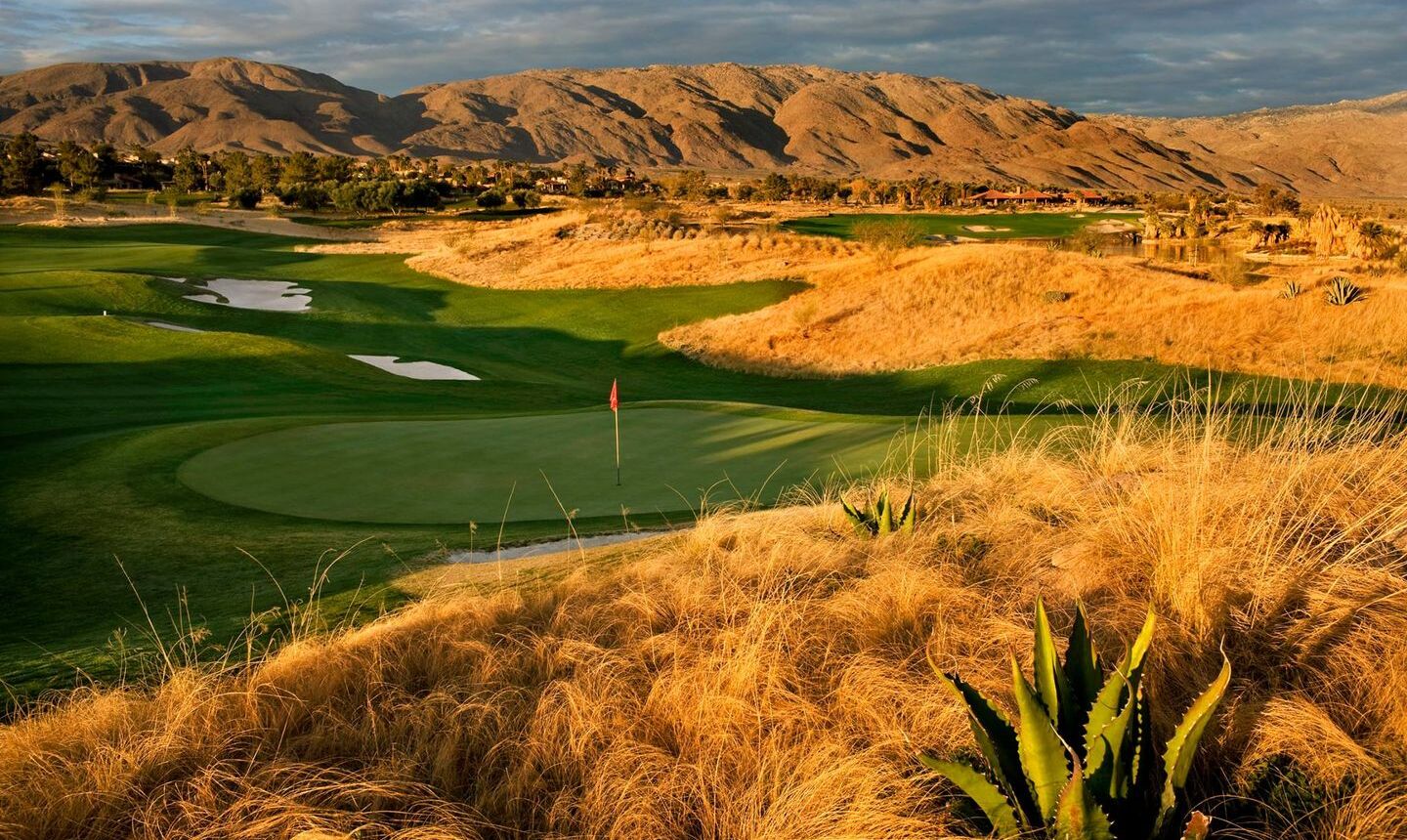 Rams Hill is a scenic outpost in the California desert. Courtesy of Rams Hill Golf Club

Desert golf provides amazing relief from the throes of winter.

Every golfer knows that Scottsdale, Arizona, and California's Coachella Valley - home to Indian Wells, Palm Springs and several other nice towns - are the places to be when the snow flies. Both are trendy, warm-weather destinations loaded with courses, resorts and restaurants.

But if you've already been there and done that, we will let you in on a little secret. We're ready to expose a few smaller, lesser-known desert golf escapes. They've got everything a golfer could ever want for a winter getaway - some sun, cacti-lined fairways and enough pools, restaurants and places to relax and entertain for a long weekend or more. Intrigued? Here's our 'Great Eight', the best little desert golf destinations during winter in America:

The journey to find the Rams Hill Golf Club is just as rewarding as playing this magical Tom Fazio design. From San Diego, the road twists and turns 85 miles through the remote canyons of the Anza-Borrego Desert State Park, California's biggest state park. You'll feel lost before paradise is found. Rams Hill might be the most scenic round of golf in southern California not on the ocean. Mountains tower in the backdrop, turning shades of pink and orange at twilight. Rams Hill gets nearly unanimous five-star reviews on Golf Advisor because the whole experience is top shelf - the service, the conditioning, the food in the clubhouse. Stay and plays are available with the nearby La Casa del Zorro Hotel & Spa or by renting a home on property for a longer vacation. - Jason Scott Deegan

About an hour north of Phoenix/Scottsdale is a gem of a destination, anchored by the newish Wickenburg Ranch Golf & Social Club, which actually benefited from what amounted to a seven-year grow-in (as the developer waited for the economy to improve) before the main course there opened in 2015. Coupled with its terrific short course, dubbed Little Wick, Wickenburg Ranch is a beautiful premium golf experience well worth the drive, especially if you combine it with staying at a nearby resort or dude ranch and playing some of the other golf course there. Besides Wickenburg Ranch, you can add in and stay at the highly-rated Los Caballeros Golf Club or check out Wickenburg Country Club, both semi-private. The prices on green fees and packages during prime season aren't bargain basement, but they are usually lower than their Scottsdale counterparts. -- Mike Bailey

Yes, there is golf in one of the most desolate and unforgiving places on earth. The Furnace Creek Golf Course was actually the first grass golf course in the California desert, opening nine holes in 1933. I played the 6,215-yard, par-70 layout in wild, windy conditions in December during the grand reopening of The Oasis at Death Valley, the old Furnace Creek Inn & Ranch that has been rebranded and refreshed with more than $100 million in upgrades. Furnace Creek plays much longer than its yardage. At 214 below sea level, it is the lowest-elevation course in the world. All the rooms at the Inn have been modernized, but there's more space in the brand new casitas. The famous landmarks in the park - the Devils Golf Course, the Artist Palette, etc. - will impress. Winter travelers don't need to worry about the scorching summer heat. It will likely be dry and mild during your stay. - JSD

This rugged retreat may be out in the middle of nowhere, but if you can figure out a way to get there, a golf trip to Lajitas Golf Resort will be one you'll never forget. Located on the Rio Grande on the edge of Big Bend National Park about 470 miles west of San Antonio and 250 miles south of Midland (there's in an airstrip nearby if you can charter a plane), Lajitas is situated in the Chisos Mountains, where temps in the wintertime typically top out in the 70s and even 80s. After a 500-year flood wiped out the original course there, Lajitas enlisted former tour player Lanny Wadkins to do a complete redesign of the Black Jack Crossings and it's nothing short of spectacular. The 7,500-yard championship course, which at one point was named the best public course in Texas by the Dallas Morning News, has plenty of tees that perch over dramatic elevation changes with vistas that stretch more than 50 miles. The resort also offers shooting, hiking and just plain relaxing in its luxurious old west accommodations. -- MB

Roughly 80 miles northeast from Las Vegas is this smaller gambling outpost where you can still get your fix at the tables and find enough golf to stay busy for a week or more. The most famous - or infamous depending on your take - would be Wolf Creek, a scenic stunner of intimidating red rocks and canyon walls. It's target golf at the most extreme. I hit a straight ball so I love it. Sprayers and high-handicappers might not. I also enjoyed the Casablanca Golf Club on a trip to Las Vegas earlier this fall, although I didn't get to stay at the nearby hotel or play its sister course, the Palms Golf Club, built as the region's first golf course in 1990. The Conestoga Golf Club and Coyote Springs Golf Club also come highly recommended by Golf Advisor users. - JSD

A great retirement spot, St. George Utah is very similar to Las Vegas 100 miles west in terms of climate, but has a very different vibe. The difference? The casinos, of course. But here, you'll find golf that gives Vegas a run for its money certainly with its incredible red rock scenery. It also offers some better deals, at least on green fees. (This doesn't apply to hotels, because Vegas and nearby Mesquite casino hotels are always trying to lure gamblers with discounted rates). The golf sampling in St. George includes some outstanding public facilities such as Coral Canyon Golf Course, The Ledges Golf Club, SunRiver Golf Club, Sunbrook Golf Club, Sky Mountain Golf Course and the spectacular Sand Hollow Golf Resort, a John Fought design that comes with a nine-hole links course. Plus, you can enjoy some of the best hikes in the country at nearby Zion National Park. - MB

About 45 miles south of Tucson and just north of the U.S.-Mexican border, you'll find the small town of Tubac. There you'll discover the remains of an old Spanish presidio in the Tubac State Park as well as the 27-hole Tubac Golf Resort & Spa, one of the most unique golf destinations in the United States. Built on the historic 1789 Otero Ranch, the 500-acre Tubac Resort, which opened in 1959, is still a working ranch in the background of its golf courses, a spa, restaurants, luxury accommodations and even a 17th-century replica chapel. Tubac, however, is famous because much of the golf comedy movie "Tin Cup" was filmed there. There are plaques that commemorate some of the scenes, like the fourth on the Rancho nine, where in the film Kevin Costner's character, as a caddie, is goaded into hitting a shot to the green from 240 yards away from the green. Red Lawrence designed the original golf course, which works around the Santa Cruz River. A newer nine holes (eight of which were designed by Ken Kavanaugh) opened in 2006. - MB

Located just 45 miles from El Paso, Las Cruces as a golf destination is certainly a hidden gem. It's also a great place to enjoy New Mexican food, which if you're not familiar with, is very different from Tex-Mex, a little spicier and in my humble opinion, more flavorful. But back to the golf: The area has a couple of really cool gems to play, plus you can venture over to much bigger El Paso to play Butterfield Trail Golf Club, a grand Tom Fazio-designed municipal delight on the airport grounds. My favorite in Las Cruces, though, without a doubt is the course at New Mexico State University (which is one of the first schools to offer the PGA's Golf Management Program for prospective golf pros). This parkland design is a change of pace from the usual desert golf, with great views of the Organ mountains, interesting doglegs and a nifty history (it has hosted the NCAA Championships). Another terrific option is Sonoma Ranch, which opened in 2000. It's more of a desert course than NMSU, but offers terrific vistas as well. Very reasonable golf packages are also available through the Las Cruces visitor's bureau. - MB

Jason Scott Deegan
Jason Scott Deegan has reviewed more than 1,000 courses and golf destinations for some of the industry's biggest publications. His work has been honored by the Golf Writer's Association of America and the Michigan Press Association. Follow him on Instagram at @jasondeegangolfadvisor and Twitter at @WorldGolfer.
7 Comments

I've played Black Jack Crossing and agree, although far from everything, it is spectacular. I've also taken golf vacations in St. George and look forward to the next trip. Just played Tubac, and was lucky enough to play with a member and employee who gave a great tour to a very enjoyable course regardless of the movie. Keep up the reviews for traveling golfers.

Red Hawt golf course is the best in Las Cruces

Black Jack’s Crossing in Lafita’s is one of the top 10 courses I have played.

I agree that Red Hawk is the best in L.C.

I agree that Red Hawk is the best in L.C.

Kira K. Dixon
Lifestyle Correspondent
Now Reading
Sand Traps: The best 'little' desert golf destinations in America for snowbirds
New Cookie Policy
WE AND OUR PARTNERS USE COOKIES ON THIS SITE TO IMPROVE OUR SERVICE, PERFORM ANALYTICS, PERSONALIZE ADVERTISING, MEASURE ADVERTISING PERFORMANCE, AND REMEMBER WEBSITE PREFERENCES. BY USING THE SITE, YOU CONSENT TO THESE COOKIES. FOR MORE INFORMATION ON COOKIES INCLUDING HOW TO MANAGE YOUR CONSENT VISIT OUR COOKIE POLICY.
CONTINUE
Search Near Me