Linking golf courses and waterways can be volatile mix. Here's where it's been done best.

Rivers rise and fall with the rain, and so do the fortunes of their nearby golf courses.

Hundreds of golf courses have been designed to intertwine gracefully with a river, many considered among the best in the country. A few of them even host major professional events. All of them are special because building a golf course that shares an ecosystem with a river is as delicate a dance as there is between Mother Nature and man.

A river setting tends to both bless and curse a golf course. Rounds of golf don't get more aesthetically pleasing than when a river runs through it. Hitting a successful golf shot over a river can provide a jolt of excitement and thrill.

How to use that river bank, however, can't be taken lightly by the course architect. Not only must this person route the holes properly, but he/she must also consider keeping the holes safe from flooding and the river free from the chemical discharge of potential pesticides and fertilizers. Some river courses are more prone to flooding than others. Eventually, for all of them, the banks will overflow.

Heavy rains in February caused the Russian River to encroach upon the Northwood Golf Club near Napa Valley in northern California, closing the three holes closest to the river for cleanup. Northwood General Manager Gaylord Schaapp said the nine-hole course designed by Dr. Alister Mackenzie has flooded a handful of times over the past several decades.

Flooding in 2009 was so severe at Blue Top Ridge in Riverside, Iowa, that Rees Jones returned to completely reroute holes 2-6 away from the Iowa River, so the course could reopen in 2011. The Shawnee Golf Course in Louisville, Ky., spent last spring under 30 feet of water from the Ohio River, according to the GCM Magazine.

Constant flooding of the Des Plaines River forced Crane's Landing at the Lincolnshire Marriott Resort in Lincolnshire, Ill., to convert the par-4 eighth hole into a par 3 last year. A press release indicates that 50 acres of new turf planted in 2017 might help the 6,290-yard course with six river holes turn around its fortunes, which includes some tough reviews in 2018. Local Golf Advisor btweed1683 handed out two stars after playing Crane's Landing last September indicating: "Unfortunately, the nearby river has ravaged this course and it is constantly under water and under repair", adding that "George Fazio didn't do them any favors with the design." Certain holes can feel too narrow at times and can be negatively impacted by river overflow too often.

On the opposite end of the spectrum, Michigan architect W. Bruce Matthews III purposely designed the Hidden River Golf & Casting Club in Brutus, Mich., away from the Maple River, according to Head Professional Jerry Roman, to preserve the river's natural habitat. Only the ninth hole, a 159-yard par 3 that drops 70 feet from tee to green, comes into contact with the river. It runs along the left side. The patio of clubhouse's popular restaurant, the Rainbow Room, overlooks the river and hole as well. A trout-shaped, greenside bunker was the idea of the original owner. The club allows limited access to fly fish the river, only four people per day from an hour before sunrise to one hour after sunset. 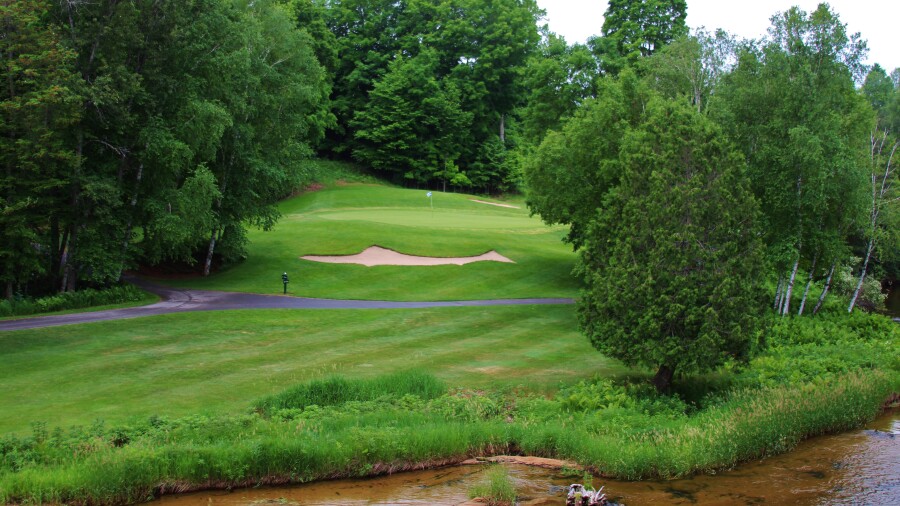 The trout-shaped bunker on the par-3 ninth hole near the Maple River at the Hidden River Golf & Casting Club. Jason Scott Deegan/Golf Advisor 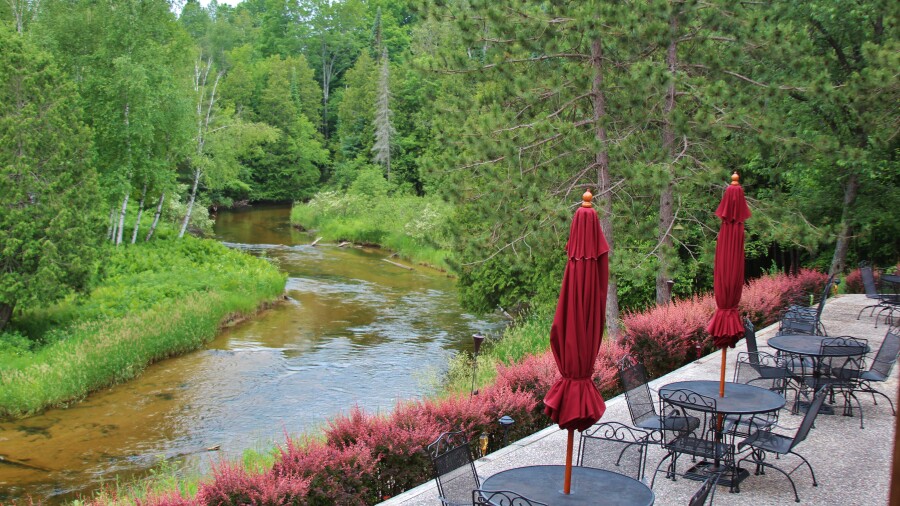 Drinks on this patio overlooking the Maple River followed by dinner in the Rainbow Room makes the Hidden River Golf & Casting Club one of the best 19th hole experiences in northern Michigan. Jason Scott Deegan/Golf Advisor

Ron Jaworski's Riverwinds Golf & Tennis Club in New Jersey is another course that uses the river extremely well. The 14th hole introduces a stretch of the five holes along the Delaware River, including an island-like green jutting into the water on the 156-yard 17th.

What I found interesting in researching America's collection of river courses is a number of the country's longest rivers haven't been integrated into any notable designs. Two of the five longest rivers in the United States - the Missouri and Yukon - don't offer any courses along their banks. Neither does the Red River, one of the 10 longest rivers in America at 1,360 miles long.

Three of the five longest U.S. rivers are witnessing at least one of their courses struggle:

* The Colorado River, where the Pine Forest Golf Course in Bastrop, Texas, allowed golfers to "name their price" for green fees earlier this spring, according to a story by CBS Austin.

* The Mississippi River, home to Arsenal Island Golf Course, a military course in Illinois built on an island in the middle of the river, is currently closed with an uncertain future. This website does list a handful of other courses near the Mississippi River, but none are really intimate with the river itself.

* The Rio Grande River in Texas, where the River Bend Resort & Country Club in Brownsville could be in jeopardy if President Trump constructs a border wall. The Rio Grande also borders two highly acclaimed courses - the popular Max A Mandel Golf Course in Laredo and the stunning Black Jack's Crossing at the Lajitas Golf Resort. Black Jack's Crossing finishes dramatically with four holes, nos. 15-18, along the water.

For those of you interested in Canada, check out the 36-hole Kananaskis Country Golf Course (Kananaskis River), the iconic Fairmont Banff Springs (Bow River) or the two courses along the Brudenell River on Prince Edward Island: Brudenell River and Dundarave.

Europe has its fine river courses as well. My mind always wanders back to one, Ireland's Adare Manor, on the River Maigue - where Richard Finch went swimming with the fishes while winning the 2008 Irish Open.

Best River Courses in the U.S. you can play

Staying on this side of the pond, the River course at Kingsmill Resort in Williamsburg, Va. takes center stage this week, hosting the LPGA Tour's Silk Championship May 23-26. It is certainly one of the highlights among my latest Deegan's Dozen of America's best public courses built on a river.

Courses with only river views - like Gamble Sands in Brewster, Wash. - generally weren't considered. I'm featuring U.S. public courses that use their rivers wisely, giving golfers demanding but gorgeous holes that play directly along or over the hazard. With apologies to Finch, let's dive into the list:

Do you love a river course not on our list? What are its best river holes? Let us know in the comments below.